Isolation in The Great Gatsby

Hundreds of people are gathered around dancing, drinking, and having a good time. People are causally talking and laughing. Men and women from all around are having the “time of their life. ” However, the lifestyle of the city, money, and connections don’t always create fulfilled, happy lives. For Daisy Buchanan, Nick Carraway, and Jay Gatsby, they are never alone but always isolated. Daisy Buchanan uses her need for attention and people to adore her most likely to cover up her fear of isolation.

Don't use plagiarized sources.
Get Your Custom Essay on Isolation in The Great Gatsby Just from $13,9/Page

From the beginning Daisy has virtually been alone. Her husband Tom was not even there for the birth of their only daughter. Well, she was less than an hour old and Tom was God knows where. I woke up out of the ether with an utterly abandoned feeling… ” (21). She was very isolated from Tom at that point of time in their marriage. This stems her fear of being alone leads to the suspicion of Tom and Myrtle’s affair.

She doesn’t have the strength to step away from Tom’s money or her fear and confront him though. She uses attention to cope with his affair. For example, she kisses Gatsby in her own husband’s house. She needs to know that someone will give and receive her attention. She lets her fear of isolation run her life.

Nick Carraway is the one of the most isolated characters in The Great Gatsby. He once said that, “At the enchanted metropolitan twilight I felt a haunting loneliness … sometimes (61-62). ” Through this quote Nick expresses his overwhelming loneliness of city life. He is originally from the Midwest and doesn’t know many people in West or East Egg. He feels alone in the “crowd” especially at Gatsby’s famous parties when “introductions (are) forgotten on the spot” (44) and enthusiastic meeting occur between people who don’t even know each other’s names. Nick also feels alone when he realizes he had turned thirty already.

He fears growing old because he sees isolation within old age. He sees the people around him and notices that no one is truly happy and as they age life doesn’t get any better. Jay Gatsby’s death confirmed his fears of isolation. Gatsby was the most well known man in West Egg and hundreds of well known, famous people showed up at his parties every night, yet “Nobody came” (143) to his funeral. Nick was just an average person just trying to work his way up to the American dream. If no one came to say goodbye to Jay Gatsby after his death, what was in store for him when he died. This mphasized his fear of growing older and being isolated.

Jay Gatsby seemed like he was on top of the world from the outside looking in. He was extremely wealthy and had hundreds of people at his house at all times; however, on the inside he was just like everyone else, lonely. The love of his life married a different man when he went off to war. He had never gotten over her and always longed for her to come back to him. He isolated himself from everything that didn’t have to do with her. He made his money, bought his house, and threw his parties in hopes to impress and get her back into his arms. He was still in need of company though.

He asked Nick Carraway to go to Coney Island in his car late one night. Then, when Nick said it was too late, Gatsby asked if he’d like to go swimming. Nick turned down his offer yet again. Gatsby had all the toys, money, and people in the world to interact with yet he was still lonely because he had isolated himself so much from the outside world. Even into his death, Gatsby didn’t have anyone but a few people at his funeral. He had isolated himself so much; he never made any true relationships. Throughout The Great Gatsby, Daisy, Nick, and Jay suffer from the fear or isolation of the outside world.

The dream life of knowing people, being wealthy and living in the city with the upper class is as glamorous as it seemed to be for these characters. They are always around people, but always alone. It’ll show you how I’ve gotten to feel about – things. Well, she was less than an hour old and Tom was God knows where. I woke up out of the ether with an utterly abandoned feeling, and asked the nurse right away if it was a boy or a girl. She told me it was a girl, and so I turned my head away and wept. ‘All right,’ I said, ‘I’m glad it’s a girl.

Isolation in The Great Gatsby. (2016, Dec 21). Retrieved from https://studymoose.com/isolation-in-the-great-gatsby-essay 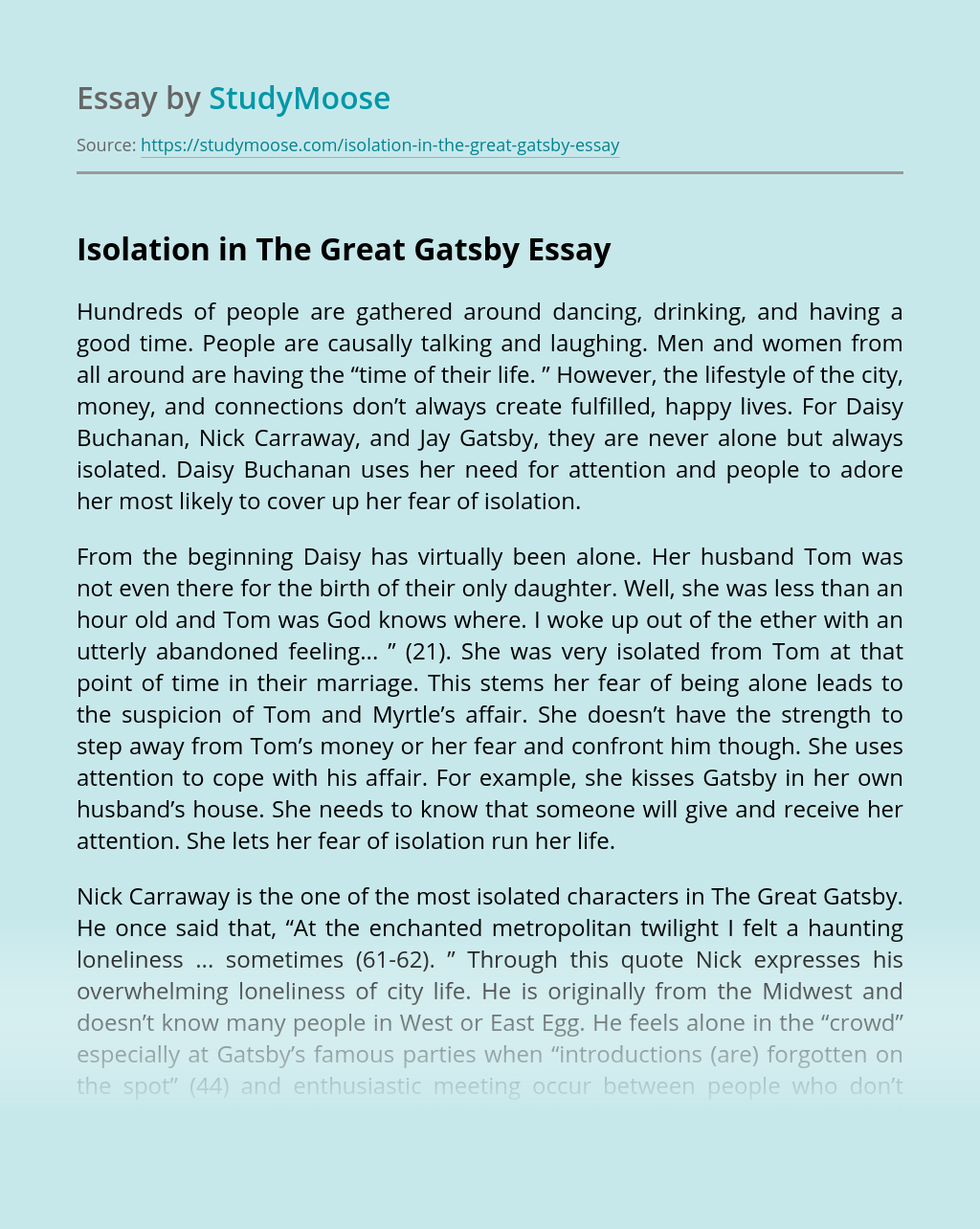 Rate this post For the previous few decades Wal-Mart has been slammed and accused for being involved with all sorts of dishonest behavior. Many different groups of individuals have followed Wal-Mart objecting against their business’s policies and company practices. Labor, community, ecological, and spiritual groups are some of the most recognized kinds of groups that...

Rate this post AGRICULTURAL MECHANIZATION: A SUSTAINABILITY TOOL FOR NATIONAL FOOD SECURITY Ola Rauf and Lateef, I A Mechanical Engineering Department, Osun State College Of Technology P. M. B 1011,, Esa- Oke, Nigeria baale_i@yahoo. com ABSTRACT Poverty is a state of insufficient of everything. The rate of poverty in developing country is very alarming and...

Rate this post With Macbeth, Shakespeare has crafted a character that falls under immense pressures from various sources. These opposing forces create internal conflict with Macbeth as he is torn between right and wrong, ambition and loyalty. Shakespeare has engineered this internal strife as a means to highlight the theme of right versus wrong in...

Rate this post economic reasons for imperialism more raw materials/ natural resources were needed to continue to make finished goods; the US was overproducing goods and they needed “new markets” to sell their products to political/military reasons for imperialism several European nations had amassed large empires around the globe by the early 1900’s and the...