The Black Cat and the Cask of Amontillado

Edgar Allen Poe, the author of “The Black Cat” and “The Cask of Amontillado”, wrote both short stories in similar ways, but at the same time the two are very different.

The Black Cat and The Cask of Amontillado are very similar in some ways. Both include a lot of symbolism. In the Black Cat, the narrator calls his cat Pluto, to symbolize death and the underworld, and in The Cask of Amontillado, the coat of arms and the Montresor family motto are symbolic of Montresor’s evil character, which, like the serpent in the insignia, intends to get revenge.

Don't use plagiarized sources.
Get Your Custom Essay on The Black Cat and the Cask of Amontillado Just from $13,9/Page

In both stories, the narrator tries to convince the audience that he is sane, and only trying to do what is right. This insistence shows that the narrator is insane and capable of doing insane things.

A man with a distorted view of reality explains the events in both the stories. The enclosure theory plays a large part in The Black Cat and the Cask of Amontillado.

In the Black Cat, the narrator walls up his dead wife and the cat, while in the Cask of Amontillado, Montresor walls Fortunato behind a wall to kill him. Montresor and the narrator of the Black Cat are both seeking revenge for wrongs done to them. Both stories force the reader to look into the inner workings of a murderer’s mind.

“The Black Cat” and “The Cask of Amontillado” were written at about the same time during Poe’s life. They show many things that he was experiencing during this time period, but they also show his short time emotions and feelings. The stories were similar in the motives behind them, with horrific themes and plots, but were different in the minute.

The Black Cat and the Cask of Amontillado. (2016, Jul 11). Retrieved from https://studymoose.com/the-black-cat-and-the-cask-of-amontillado-essay 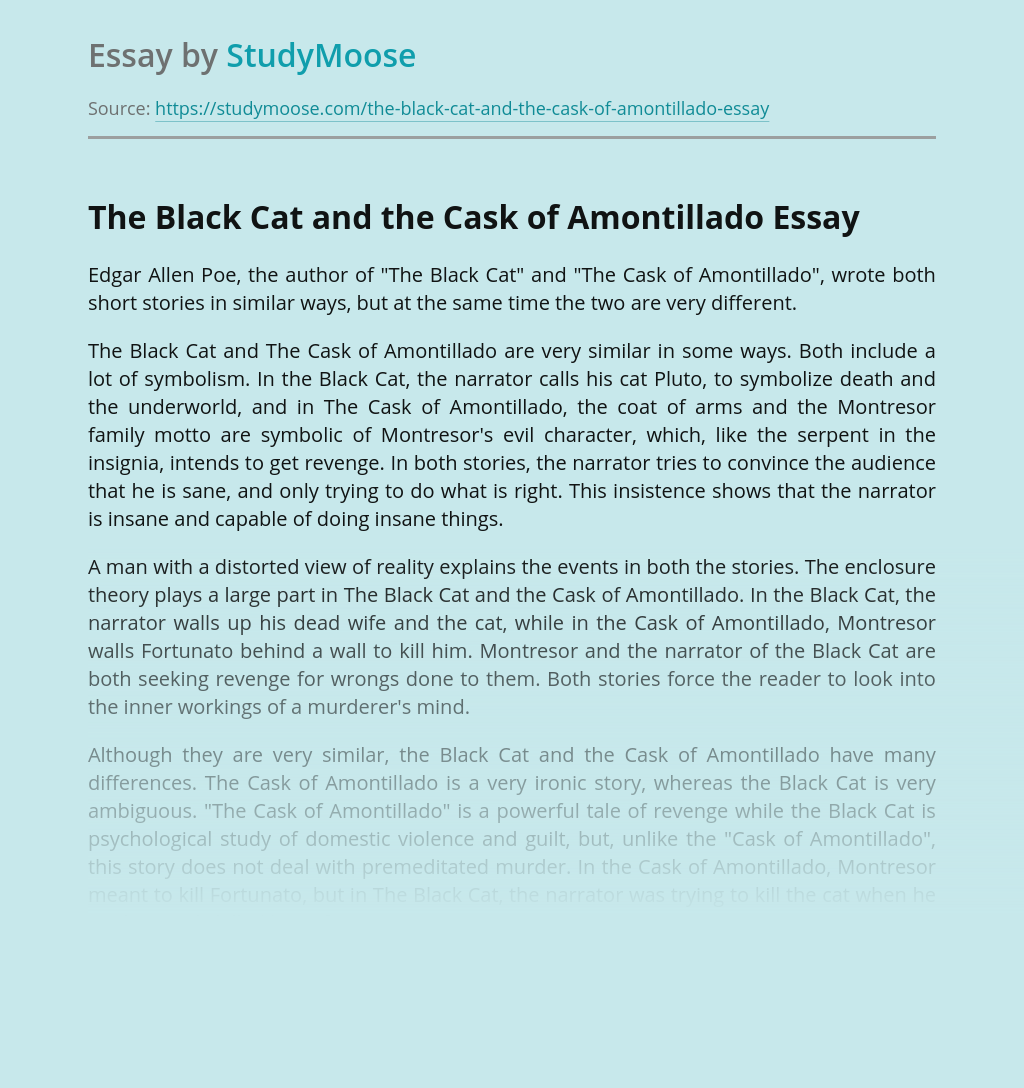 The Caura area was once an Arawak settlement and it lay in the valley along the Tacarigua river approximately five miles north of the eastern main road. When the British captured Trinidad in 1797, nineteen lots were marked along the river area. This represented a strip that began from the Caura Valley entrance and lead...

View sample
Get Essay
PHSC-210 Age of The Earth

Age of The Earth: Old-Earth vs Young-EarthAshleigh ClarkDr. Timothy R. BrophyPHSC 210-D13December 3, 2018IntroductionThe age of the earth has been a topic of discussion between both the Old Earth and Young Earth scientific communities for many years. While the Old Earth view puts the age of the Earth at around 4.6 billion years the Young...

·Political factors: · government type: Vietnam is known as a Socialist Republic. · freedom on economy: Vietnam has not high economic freedom, which score is 51.0. Even though the index of Vietnam can not compare with western developed countries’, however since 1986 the government implement open-door to the outsider world policy, making Vietnam becoming to...

The Chipko movement or Chipko Andolan is a movement that practised the Gandhian methods of satyagraha and non-violent resistance, through the act of surrounding trees to protect them from being felled. The modern Chipko movement started in the early 1970s in the Garhwal Himalayas ofUttarakhand,Then in Uttar Pradesh with growing awareness towards rapid deforestation. The...