Ever since grade school you were taught that our solar system has nine planets. Sadly that is no longer the case; in 2006 astronomers have decided that Pluto no longer qualifies as a planet. Pluto is now considered a “Dwarf Planet” and has caused a lot of controversy among astronomers. A dwarf planet is not even considered to be a planet, and there are projected to be hundreds of them in our galaxy.

Don't use plagiarized sources. Get your custom essay on
“ Solar System ”
Get custom paper
NEW! smart matching with writer

Pluto is being demoted to what amounts as a third class citizen in our galaxy.

Thousands of textbooks will have to be revised and changed in our schools just because of this one change they made to our solar system. According to the new definition for a planet, a full-fledged planet is an object that orbits the sun and is large enough to have become round due to the force of its own gravity. In addition, a planet has to dominate the neighborhood around its orbit. The definition is flawed, relating to “clear the neighborhood”.

Every 228 years Pluto crosses inside of the orbit of Neptune, so technically speaking, it does not clear its neighborhood.

But that also means that Neptune does not clear its own neighborhood. Mars and Jupiter don’t clear their neighborhoods as they “interfere” with the Asteroids, and the Earth actually orbits the Sun with thousands of Asteroids. So the Earth doesn’t clear its own neighborhood either. So if we use the new definition, Pluto, Neptune, Jupiter, Mars, and the Earth, are not planets! Otherwise Pluto fits the definition for a planet; it is from a faulty definition that Pluto is no longer allowed to be a planet.

Also, a body’s difficulty in clearing its orbit or the volume of space that it must clear increases dramatically its distance from the sun increases. Clearing is most difficult for Pluto, the furthest “planet” from the sun. Furthermore, why aren’t “Dwarf Planets” known as planets? Dwarf Stars are still stars, and Dwarf Galaxies are still galaxies. If it has the word “planet” in it why is it not a planet? One of the biggest problems with how Pluto got demoted from being a planet was the voting process.

Although there are over 10,000 Astronomers in the International Astronomical Union, only 237 of them voted and approved this definition. Only 4% of the astronomer population voted, many of them felt they should have been able to vote electronically. Therefore, there was NOT a majority consensus of what a planet is. If people had to be at only one specific spot every time they voted for something I’m sure even our presidential votes would have changed because no one would want to vote.

Hundreds of Astronomers around the world have signed petitions to ignore the new definition and still refer to Pluto as the ninth planet in our Solar System. They believe the definition of a planet is sloppy and needs to be drastically revised. If so many astronomers don’t agree with the decision, what gave them the right to change the definition and make Pluto no longer a planet? The demotion of Pluto is also going to hurt its research funding. No one wants to study it if it’s not important enough to be a planet.

Discovered in 1930, Pluto orbits the Sun, has three moons, has an atmosphere, has weather, and even polar caps. It is not that much different than any of the other planets. It has been known as a planet for more than 75 years, and to change its status with a poor definition and process is bad science. Pluto has earned the right to be a planet; it has been for years and for a few men to say it’s not based on a bad definition is wrong. Pluto needs to be considered a planet again, who knows what they might try to change in our solar system next. 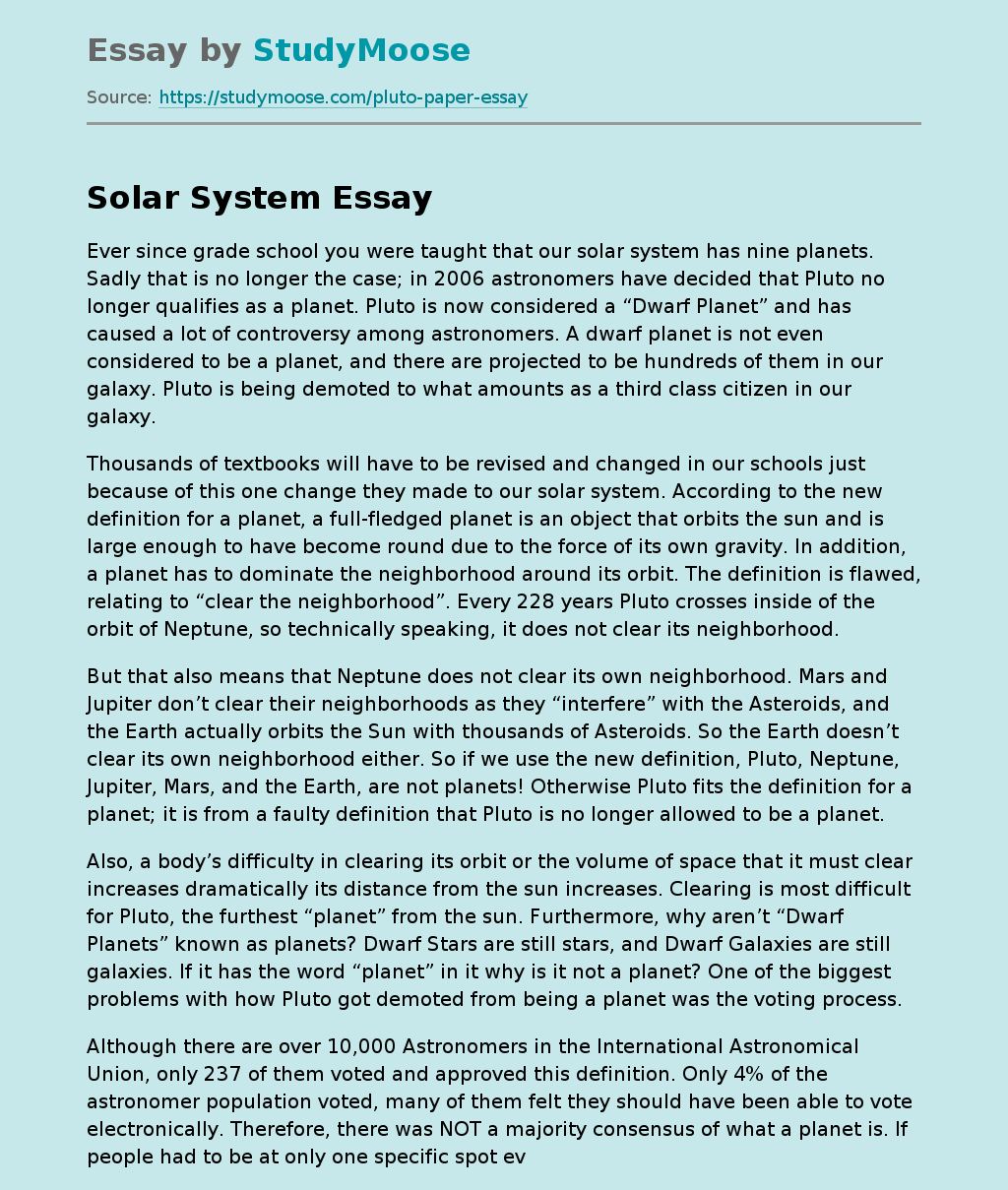