Why is History so controversial?

Incomprehensible facts of history get overlooked to fit the script people want to believe. So, history by its nature is a subject based on interpretation. As man and time changes, so do stories and tales that include history. Therefore it is necessary for students to make and justify decisions about the relative authenticity of historical texts. History can be compared to the situation in class where the teacher whispers a sentence into a student’s ear, and then the student is to repeat the sentence to the next student and so on until the last student hears it.

Turn in your highest-quality paper
Get a qualified writer to help you with
“ Why is History so controversial? ”
Get high-quality paper
NEW! AI matching with writer

It is human to interpret what we hear or learn according to our opinions. In this example, each student can represent a decade of time and the sentence can represent history. In the settlement of the 13 colonies, there are different interpretations of the settlers and the natives. “Victors write history” and therefore the defeated ones have no choice but to rely on oral history.

The difference between both articles “The planting of the colonies” and “The Early Settlers” written by Nevins & Commager and Zinn clearly show that either of them is biased or both of them are.

Nevins & Commager talk more about superiority of the settlers and inferiority of natives whereas Zinn talks more about life and culture of the Natives and also that they were superior to the settlers in relations and humanity. In showing inferiority to the natives, Nevins & Commager state “…. filled with wild beasts, and peopled by warlike, cruel, and treacherous people still in the Stone Age of culture” (2).

Moreover, Nevins & Commager also state “…. creeping on all fours from hills, like bears, with their bows in their mouths” (2). In contrast to this, Zinn writes “A French Jesuit priest….wrote: “No poorhouses are needed among them, because they are neither mendicants nor paupers…. Their kindness, humanity and courtesy not only makes them liberal with what they have, but causes them to possess hardly anything except in common” (2).

Talking about the settlers, both Nevins & Commager and Zinn also disagree with each other. While Nevins & Commager state “…. admirably fitted to become the home of an energetic, thriving people,” Zinn disagrees writing “…. brought over by the first colonists, a society of rich and poor controlled by priests, by governors, by male heads of families.” This shows how can history be interpreted as both articles are of the same period but of different views. Work can be seen as biased if an author doesn’t agree with himself and so do Nevins & Commager in their next article.

As we move on to learn more about controversial history, Nevins & Commager in their second article “Developing Americanism” talk utterly about the Americans. In this, they talk more about the developing identity of the settlers and therefore state “By 1775, a distinctly American society, with its own social, economic, and political traits was emerging” (2), but coming to reality, they were just Englishmen who came to a new place. Consequently, the “emerging American society” was based on English traditions, language and laws. Nevins & Commager by themselves say “….which made the English language and English insti¬tutions everywhere dominant.”

The only thing that was uncommon was the religion as stated “All non-Catholic faiths were encouraged, and Anglicans, Moravians, Presbyterian, Anabaptists, Lutherans, and Jews worshipped side by side” (Nevins & Commager,) Moving on, Nevins & Commager first state “At the time of the Revolution three fourths of the white colonists were still of British blood”, and later they write “It is clear that even during the colonial era America was something of a melting pot.” Again it clearly shows that the work is biased as Nevins & Commager don’t agree with themselves. Therefore, it leads us to the fact that controversial history exists.

As it is stated before, history is a subject based on interpretation and this is the reason why history is full of controversies. It is controversial because people do not want to admit some details of the actual truth; rather, they are too ethnocentric to believe that their country had done wrong, so the truth gets bent or re-shaped. Hence is why some believe that the holocaust never happened. Controversial history does not exist in every source. It depends on the historian that how has he gathered the information, in other words, what source is used. To gather information, historians have to do plenty of research from either of the two sources, primary or secondary. Primary sources are original records created at the time historical events occurred. Primary sources may include letters, diaries, newspapers, speeches, interviews, etc. These sources serve as the raw material to understand the past and are also used to write secondary sources. Secondary sources are records of the words of someone who didn’t actually witness a historical event, but investigated the primary sources.

These include books, journals, articles, etc. Primary sources can sometimes be interpreted but it is mostly the secondary sources that contain most of the interpretations also known as biased work. As most facts don’t speak for themselves, it is compulsory for the author to give it a shape. In order to give it a shape, opinions must be added. At various places in the text, the author may embellish and/or omit crucial details, based upon what they think is more important. Bias is the adding of opinion or favoritism in a text. When a text is biased, it no longer can be counted as a credible source. So the role of bias in interpreting history is extremely important therefore students need to know how to evaluate a good source.

Developing techniques may help in evaluating a biased work. A student can assess the credibility of history and historians by asking several questions: 1) Who is the author? 2) When and where was the text written? 3) What was the purpose for writing it? 4) Is the author fair enough in his writing or is he one-sided? 5) What evidence is given to support the thesis? When a student has answered the following questions, he can compare the work of the author with another author’s text that is based on the same topic. By comparing them, the student might reach a conclusion and tell whether it a good historical source.

Most of the historical texts may contain interpretations and so is its nature. Biased work may be found almost in every historical text. So one needs to find out what the truth is and what’s false. This can be done by the several methods as given above. Conclusively, it is important to add interpretations for attracting people to read it, but at the same time, interpretations should not be from one point of view.

Nevins, Allan, and Henry Steele Commager. A Pocket History of the UnitedStates. Pocket, 1989.

Why is History so controversial?. (2016, Aug 03). Retrieved from https://studymoose.com/why-is-history-so-controversial-essay 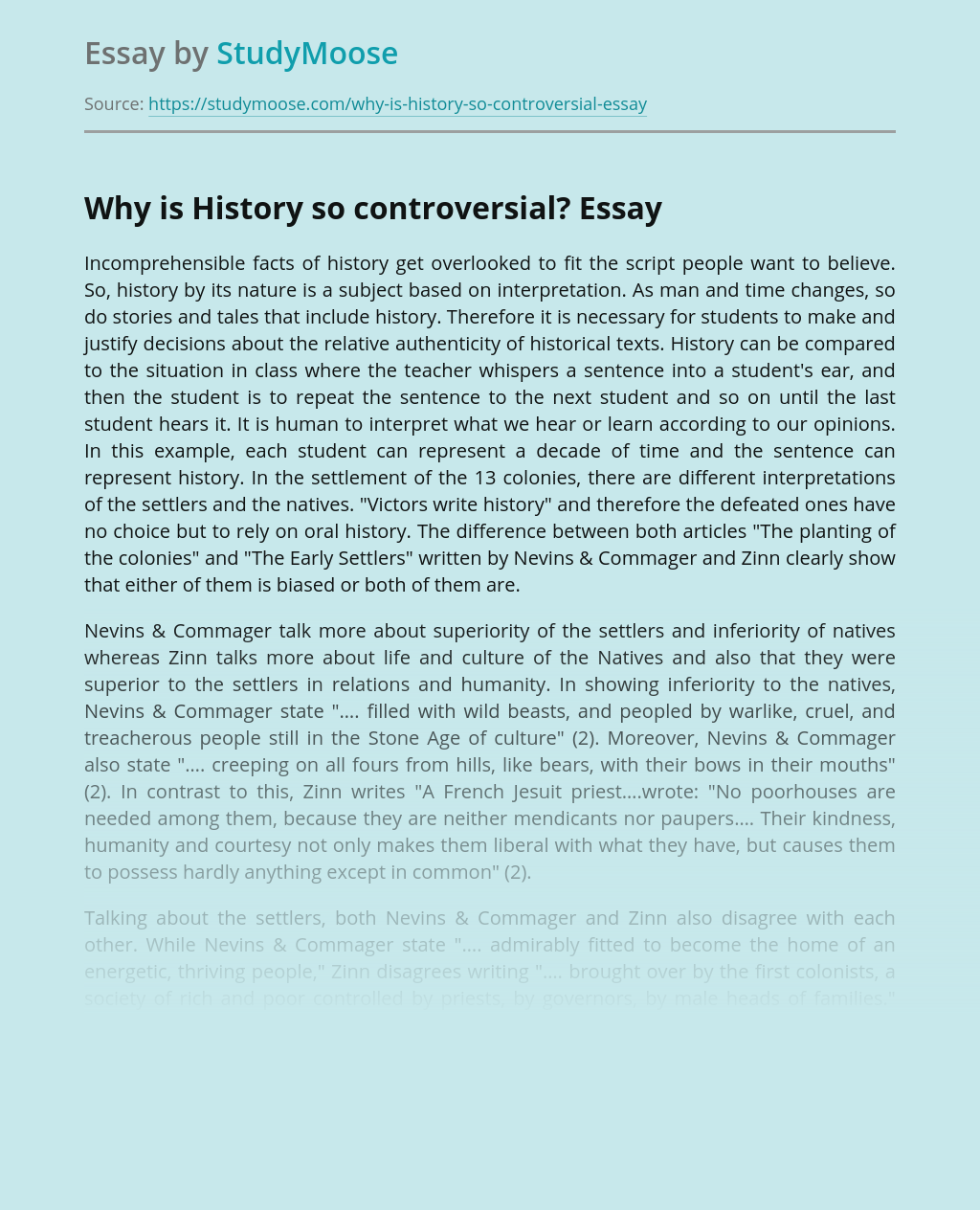 Turn in your highest-quality paper
Get a qualified writer to help you with
“ Why is History so controversial? ”
Get high-quality paper
Helping students since 2015
Stay Safe, Stay Original