Marilyn Manson and His Impact on Sub-culture

Marilyn Manson has been pushing the envelope of the right to freedom of expression since his controversial “shock rock” antics began in the early 1990’s. His methods are strange and rejected by most of society, as it cannot understand what he is trying to achieve. Many people believe that Marilyn Manson is bizarre, seeing him wearing women’s clothing, applying heavy facial makeup, and covering himself with jewelry.

His success can be attributed not only to his entertainment abilities, but even more so to the incredible marketing campaign organized to promote himself and his crazy actions.

Don't use plagiarized sources. Get your custom essay on
“ Marilyn Manson and His Impact on Sub-culture ”
Get custom paper
NEW! smart matching with writer

His actions give the media a scapegoat to fall back on and a figure which they can blame all of society’s problems. He has amassed a large following throughout the 1990’s and even today as the self-proclaimed Anti-Christ Marilyn Manson. His fans understand where he has come from, what he has been through and are familiar with rejection from society.

The Marilyn Manson’s following is normally associated with the Gothic or “Goth” subculture.

At first examination, this seems to be the case as Manson followers and those of the Goth community share remarkable similarities; although true Goths label Manson follows as merely “Spooks” or “Mall Goths”, and not real members of the Gothic following. The similarities have been exploited by the media and have linked his music to violent acts against society.

“It was following the Columbine incident that the media began routinely tagging Marilyn Manson as ‘goth rock’ despite the fact that Manson’s music had little relation to gothic music or sub-culture.

This essay will explore the reasons why Marilyn Manson is who he is today, why he has such an influence over a particular subculture, and if these followers are actually part of the Gothic community.

Who Is Marilyn Manson?

“Brian Warner, who formed the band in 1989 and whose apparent business savvy and flair for controversy turned them into a success. Using androgyny, satanic images and themes of rebellion and death, Manson irked bystanders and proved that outrageous rock was still a viable form of entertainment.” (Marilyn, Answers.com)

The band originally started in South Florida as a small industrial Goth band, and by 1990, Marilyn Manson, along with four other musicians became Marilyn Manson and the Spooky Kids. They opened for Nine Inch Nails (NIN), and Trent Reznor was very impressed with them and would help them in the future in many different ways. They got a contract from Trent Reznor’s new label “Nothing” and got a spot on Nine Inch Nails’ 94 tours. Manson got to meet Dr. Anton Szandor LaVey. He is the founder of the Church of Satan. Dr. LaVey named Manson as a priest of the Church of Satan. Hence, the title Reverend was given to Manson. (Stanton, Bizarre)

Manson’s interest in Satanism began when he as a young boy. He spent most of his childhood at his grandparent’s home. Manson and his friend didn’t have anything to do except explore his grandfather’s (Jack Warner) basement. They find out that his grandfather is a cross-dresser and a user of explicit pornographic material such as bestiality. This is where Manson was first introduced to perversity. He attended a Christian school and had Christian beliefs forced upon him even though he was Episcopalian.

He was teased and ridiculed because of this. This aside, he always knew that their was something different about him. After being detested by his peers, he gradually began to hate his school and take exception to everything that he was told. He turned to music to free him of the troubles that exist in his life, and instead finds out who he really is. He becomes the exact kind of person that he was once scared of as a youth. (Long, Manson and Strauss)

Manson began his teenage years in public school where sex, drugs, rock, and the occult were laid in front of him and he began embrace them. Here he meets many people with the same interests as he has. Manson also begins to experience his sexuality with women. From his school experiences to his involvement with sexuality, Manson begins terrorizing the people who have mistreated him. He started to experiment with black magic, began an enduring drug habit, and displayed his disgust for mainstream citizens by stealing from stores. All of this is what Brian Warner was, and who Marilyn Manson was to become. (Long, Manson and Strauss)

As Manson’s reputation developed, so did the disturbance surrounding him and his actions. His concerts were regularly protested by civil rights groups, and his music was the target attacks from religious and more specifically, Christian groups. This image was created using Manson’s genius for marketing. At the peak of this controversy, Manson had a cover story in Rolling Stone Magazine as well as a best selling autobiography: The Long Hard Road Out of Hell.

Why Does He Have Such A Following?

“Congress shall make no law respecting an establishment of religion, or prohibiting the free exercise thereof; or abridging the freedom of speech, or of the press; or the right of the people peaceably to assemble, and to petition the government for a redress of grievances.” (Bill of Rights)

Manson, along with many other artists, fully embraces their first amendment right to free speech to get their message across. This message mainly appeals to younger generations who can relate to Manson’s songs. Younger audiences are more accepting of his attitude and beliefs, partly due to the fact that teens are more susceptible to mass influence and are easily confused. His communication and identification through music allowed him to amass a loyal following of discontented teens, also know as “Mansonites.”

“Mansonite can also be used to refer to anyone who has chosen to identify with the Goth subculture without having any idea of its actual nature or composition. Generally, an overnight Goth, or Spooky Kid, will adopt certain aspects of the Goth aesthetic (predominantly black clothing, copious amounts of eyeliner) and loudly proclaim themselves Goth.” (Mansonite, Wikipedia.com)

Older generations are quick to assume that it is Manson’s antics which appeals to his followers. But, if no attention was paid to Manson, and his songs and actions didn’t receive the attention that they do, there wouldn’t be such controversy over his religious beliefs or whether he is actually influencing delinquent teens. Teens that are labeled as outcasts can identify with Manson because the media portrays him as an outcast. He dresses differently, often in women’s clothing and he pretends to be a homosexual – something which is a hot topic of acceptance in today’s society. Teenagers these days have very short attention spans and turn to someone like Manson to entertain them by doing extreme things.

A style of rock music that often evokes bleak, lugubrious imagery. A performer or follower of this style of music – Courtesy of Dictionary.com

“Mall Goth or Spooky Kid is a disparaging term for someone not supposed to be a real Goth, whose commitment to the Gothic is seen as shallow, pretentious, or dependent on shopping mall-purchased Goth clothes. Their taste is narrowly subjective to mallcore/nu-metal. There have been accusations that (some of, at least) those who listen to the music of Marilyn Manson, Korn, and Slipknot are mall goths. Many mall goths shop at the popular clothing store Hot Topic.” (Mall Goths, Wikipedia.com)

Real Gothists would refer to Mansonites as “posers”, who pretend to know about a particular subculture, but in reality only know a few choice buzz-words and what style of clothes to wear.

How do you define Goth? Goth is short for Gothic, and we typically associate Goth with people that wear black or blood-red coloured clothing . These clothes are often made of leather, lace, and fishnet, and are adorned with spikes, studs, or other shiny metal objects. Sometimes metallic, black, or dark makeup is worn by both the male and females. Some go so far as permanent body modifications such as full body tattoos, tongue splitting, or vampire teeth implants.

“Those in the Goth scene tend to view the Goth concept rather as an expression of individuality, something they take part in because it seems comfortable and natural for them to do so, rather than because it’s something they want to be. And as such, Goth is a state of mind. Goth is not about being cool-hip, up-to-date. Goth is more about being cool-chilly as in unemotional, detached, unmoved… at least on the surface. There’s an inner calmness, tranquility to it. A need for being given and giving the others space to be at one with themselves. Respect towards the individual – at least as long as it is a fellow Goth.” (Goth, BBC)

After conducting a thorough research of the particular subculture, it really is difficult to define Goth. It is ambiguous and open for interpretation. If Marilyn Manson followers acts or dresses a certain way because of their expression for individuality, then they could be considered Goth. If a Marilyn Manson follower acts or dresses a certain way just to follow the crowd or fit in with this subculture, then, based on the quote above, they would not be considered Goth.

The Bill of Rights, US Department of State

Marilyn Manson and His Impact on Sub-culture. (2016, Jul 22). Retrieved from https://studymoose.com/marilyn-manson-and-his-impact-on-sub-culture-essay 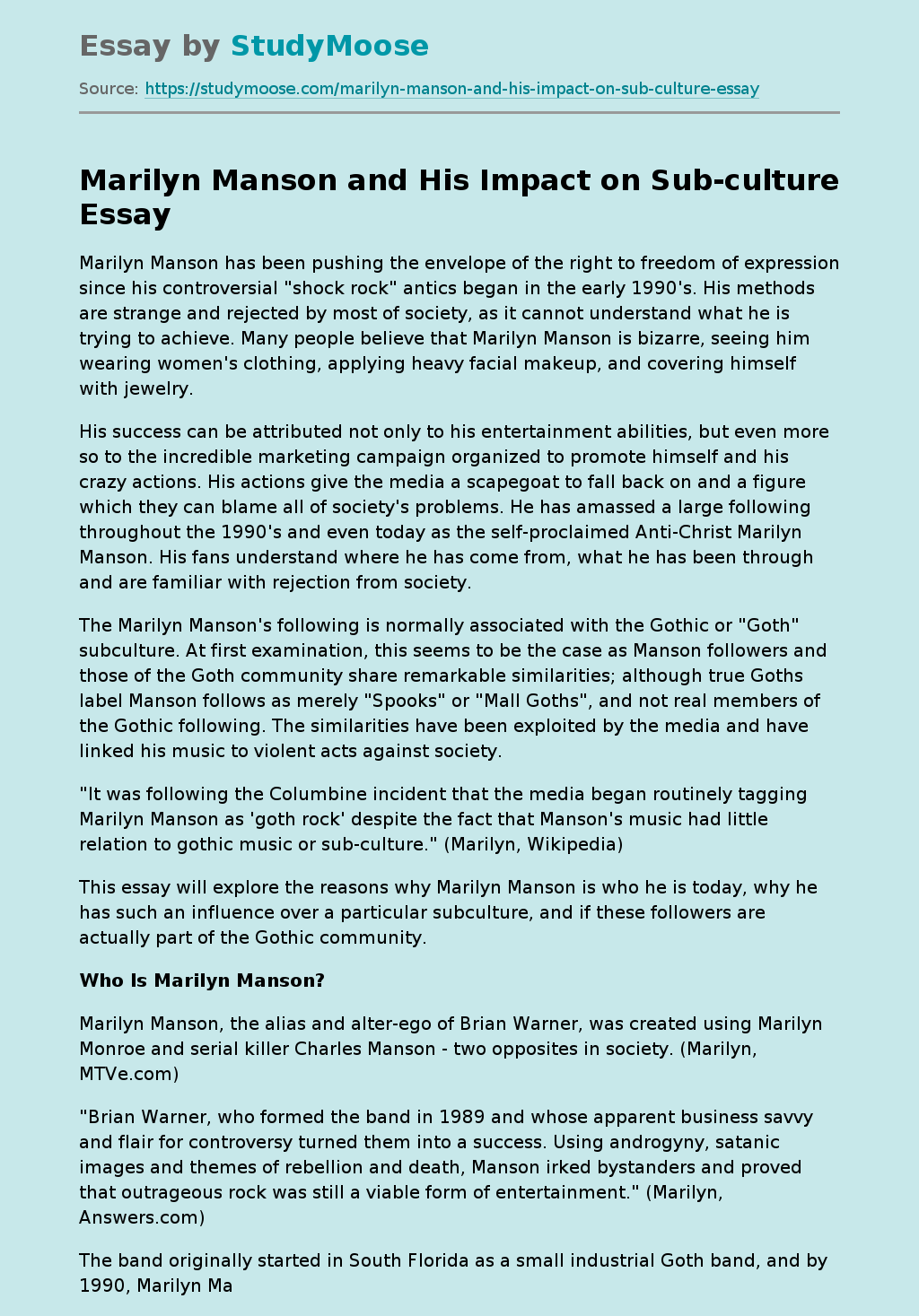