Charles Manson is notoriously connected to the brutal border of Sharon Tate and other Hollywood residents. Born Charles Milles Maddox to sixteen year old Kathleen Maddox, Charles was born into mayhem. Kathleen was an alcoholic and a prostitute; she was not very accepting of her son and showed him no love. Kathleen married William Mason and quickly that marriage dissolved. Fighting for his mother’s attention Charles left his home and lived on the streets.

Manson began to do petty crime to get by.

Don't use plagiarized sources. Get your custom essay on
“ Case Study of Charles Manson ”
Get custom paper
NEW! smart matching with writer

Charles Manson spent about half of his life in prison; he was noted for being a model prisoner. In 1955 Charles got married to a seventeen year old and moved to California. She became pregnant and soon after Manson began his life of crime, instead of petty crimes he moved up to stealing cars. Soon his wife left him and moved away with his child. While incarcerated Manson tapt into his creative talents and learned how to read music and play the guitar.

When analyzing the case of Charles Manson four perspectives come to mind. The four perspectives that could be applied to the life of Charles Manson include psychodynamic, behavioral, humanistic, and sociocultural. Psychodynamic is the modern version of psychoanalysis that is focused on the development of a sense of self and the discovery of motivations behind a person’s behavior other than sexual motivations.

This applies to Manson because he struggled with not only knowing himself, but finding acceptance from those around him. The behavioral perspective is voluntary behavior that is learned.

Behavioral responses are filled by pleasurable consequences are strengthened or reinforced. Manson learned his behavior at a young age as his mother set a poor parental example by using drugs and her refusal to acknowledge his existence escalated his desire to be followed. The third perspective is cognitive and it states the modern perspective that focuses on memory, intelligence, and perception, problem solving and learning.

Manson would fit into this perspective because of his memory of survival by stealing which lead him to be in and out of prison. Finally we look at the sociocultural perspective that focuses on the relationship between social behavior and culture. The social behavior that he exhibited while moving between relationships and imprisonment was magnified when The Beatles came out with Helter Skelter. The two perspectives that seem to best explain the life of Charles Manson are sociocultural and behavioral. The behavioral perspective represents learned behaviors. At an early age Manson was around drugs, drinking, and prostitution. Naturally Manson learned that these things were ok. His mother was a prostitute that wanted nothing to do with her son; she also had a drug problem.

Manson grew up in and out of prison and developed a drug and alcohol problem. Manson could not have a functioning relationship, his first wife left him due to him being in and out of jail. Manson second wife was a prostitute and divorced Manson after he was arrested for pimping, stealing, and conning. After being released from prison Manson headed to San Francisco where he played guitar. Manson began to develop followers. Manson developed a need for followers, he and his followers moved to a ranch and soon it became a cult compound for “the family.”

The consequences of Manson’s actions were reinforced each time he was thrown into prison but let right back out, or each time he was allowed probation. He was able to commit the crimes knowing he would just be back in jail and shortly released. The sociocultural perspective looks at Manson’s social behavior. Manson showed a need to have a connection. The connection he did not receive from his mother or a father figure. Manson turned to music, when he learned to read music sheets and play guitar.

He believed he could be a famous musician when he was released from prison. Soon after Manson was released The Beatles released their white album, Manson believed that their song Helter Skelter was a prediction of an upcoming race war. Manson led his followers to believe that this race war was going to occur in the summer of 1969, when blacks were going to rise up and slaughter all the whites. When this Armageddon did not occur he convinced his followers that they would need to show the blacks how to do it. Manson was connected to multiple murders and is in prison today. Although he has commented horrific crimes, different perspectives in psychology can help explain his behavior to the healthy minded.

Case Study of Charles Manson. (2016, May 26). Retrieved from https://studymoose.com/re-case-study-of-charles-manson-essay 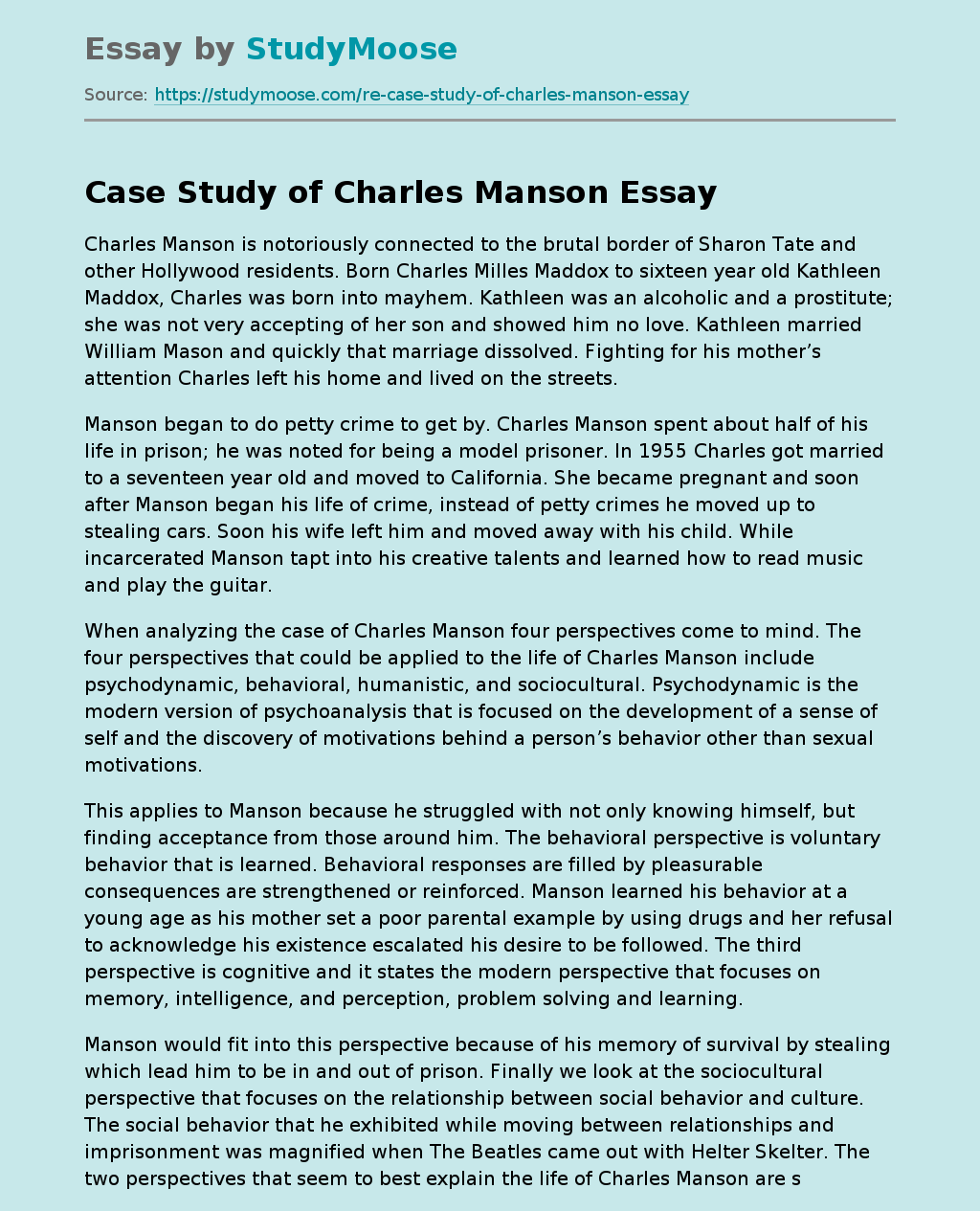