The Second Letter of Henan Cortes to Charles V

The Second letters to Charles V were written by Hernan Cortés of Spain in 1520. The letters were sent to Charles V to justify Cortés actions of attacking the Aztec’s against his superiors order. The letters that Cortés wrote details the lifestyle, and culture of the Aztec’s and how worshipped pagan gods. This document is a set of letters that Hernan Cortés wrote detailing his experiences within the area known today as Mexico. These documents allow readers to see the Aztec culture through the eyes of Cortés during his conquest in Mexico.

Don’t waste time
Get a verified writer to help you with The Second Letter of Henan Cortes to Charles V
Hire verified writer
$35.80 for a 2-page paper

As a result of this, there is a bias against the Aztecs in the letters since Cortés was a very religious Christion. This article was intended mainly for the Emperor, but the details Cortés put into explaining the power of Aztecs would eventually be used to present the achievements of Cortés. [1: Arkenberg, Cortés. “Hernan Cortés: From Second Letter to Charles V, 1520.

In 1485, Hernan Cortés was born in Spanish kingdom of Castile and would later on die in 1547 at the age of 62. Cortés would go to become a Spanish Conquistador and would eventually lead a campaign that would end in the creation of New Spain or future Mexico. His most well-known achievement would be his ability to conquer the Aztec empire in 1521. Cortés did have an education since he studied at the University of Salamanca to become a lawyer but would drop out after two years, to chase after the tales and stories of the new world.

As a result, Cortés education allows the Second letter to Charles V to illustrate the society of the Aztecs in a sharp way. Cortés was also very intelligent in the way he wrote the letters to CharlesV.

Cortés was trying to justify his actions for attacking the Aztecs, and the emphasis he puts on the Aztecs, pagan beliefs would appeal to the Christian Emperor Charles V. Another point where Cortés was smart about writing the document was commenting on the wealth of Montezuma the King of the Aztecs. This type of writing on about how great a king Montezuma was attempted to touch on the jealously that Charles V might have that a pagan king can have such wealth and power. [2: Hernan Cortés and Anthony Pagden, In Letters from Mexico (New Haven: Yale University Press, 2001), 11. ][3: Cortés, and Pagden, In Letter from Mexico, xli]

An essential thing to determine was what reason did Cortés have for creating this document. The reason that Cortés created these letters was to justify his actions of heading to the region of Mexico against the wishes of the governor of Cuba who was Diego Velázquez. The region of Mexico was something that fell under Velázquez authority so when Cortés decided to try and conquer Spain this was a threat to his power within the region. As a result, Cortés wrote to Charles V to justify his actions of conquering the region that would be named Mexico. Furthermore, Cortés within his document begins to portray himself as the perfect image for the emperor in this new region. An example of this would be when Cortés writes about “purifying the chapels in which they had stood, as they were all polluted with human blood, shed ill the sacrifices. In the place of these I put images of Our Lady and the Saints, which excited not a little feeling in Montezuma and the inhabitants.”

This particular action of placing images of the Saints on pagan idols was something that would have portrayed Cortés as the perfect representation of the Emperor. The significance of religion was a key factor to promote his conquest to the emperor since the conversions of natives was beginning to gain considerable prominence within the new world. As a result Cortés made sure to explain the Aztec culture, religious believes to support this idea that these pagans required Christianisation. Cortés continues to support his point of the need to convert these savages within the letter criticising the customs of the Aztecs specifically the use of human’s sacrifices. Cortés also made sure to describe the Aztecs as primitive people who worshiped false gods and viewed the king as a “barbarous monarch”. As a result, Cortés placed himself in a strong position to be the symbol of the crown that could bring a stable Christian society to save these people.[4: Cortés, and Pagden, In Letter from Mexico, 11][5: Arkenberg, Hernan Cortés: From Second Letter to Charles V, 1520][6: Arkenberg, Hernan Cortés: From Second Letter to Charles V, 1520]

The primary intended audience was Charles V to in an attempt to gain support from him to have authority over the territory of New Spain. Cortés wanted to set up a position where he did not have to answer to the governor of Cuba but only had to address himself to the Emperor. The audience of the document was not only meant to be for Charles V, but most people in Spain were able to read. Cortez went into great detail about the power of the Aztecs to add to his glory of how he was able to conquer a whole nation. As a result, Cortés did his best to relate what he was experiencing to cities in Spain and the old world to allow readers get an idea how the cities and culture functioned in the new world. Cortés also made sure to touch a lot on the culture and the traditions of the natives in an effort to convey the Aztecs way of life. As result anyone who would end up doing the research on the Aztec culture would see this source as a helpful primary document.

The document does have a significant historical importance as it provides readers with a view into the Aztec empire. The letter that Cortés wrote begins by providing a detailed look into the culture of the Aztecs, and the structure of their society. This message is important since the Aztecs did not have a formal way to record their history. This letter gives readers an understanding of how the Aztecs dealt with their surrounding neighbours and how they practised their religious beliefs. The letter also covers the architecture that the Aztecs used within their community, and the origins of where the Aztecs originated. For anyone doing research on the Aztecs Cortés letter to Charles, V is an important primary document to use. Readers of the letters can expect to find Christian bias within the document that looks down on particular traditions of the Aztecs since Christians condemn certain actions as savage. Within the document, there is a push by the narrative to view the Natives as savages, but the central sense from the letters is that the Aztecs had a civilized society.

The document continues to show readers that the Aztecs had a very cultural society with a complicated system of ceremonial practices within the Aztec court. Even Cortés who regularly described the Aztecs as barbarous was surprised by the amount ceremonial proceedings involved in their court. Even though Cortés goes into detail about the ceremonial and complexity of the Aztecs it is not with the right tensions. Cortés hoped to make Charles V jealous about the wealth of this new king and hence would be more likely to allow Cortés to conquer the region of present day Mexico. This type of information is critical to having an understanding to the Aztec way of life since the culture and ceremonies were at the foundation of understanding most ancient cultures.

The letter also provides an understanding of the Aztec way of administrating the regions under their control. The letter goes into detail explaining the use of collectors to collect tribute from the surrounding areas of Tenochtitlán. The letter even goes into detail touching on the fact that the king would receive a large array of different sources of tribute. In conclusion, the letters that Cortés wrote provide readers with profound insight into the world of the Aztecs. [7: Arkenberg, Hernan Cortés: From Second Letter to Charles V, 1520][8: Cortés, Hernan Cortés: From Second Letter to Charles V, 1520]

The letters that Cortés writes allows historians a chance to see the new world in through the eyes of the Christians conquistadors. Through the use of the document, the readers get a chance to see the mentality of the Christian Conquistadors and how they were able to justify their actions against the Indigenous population in the new world. Readers also get to examine the logic of how the Spanish were able to condemn the Aztecs as savages regardless of the achievements and complexity of their society. Historians who study the letter are then able to understand how slavery of the native population was seen to be justified by the Christians as they developed the idea that the indigenous population was just pagan savages. In conclusion, this document provides insight into the world of the Aztecs and how Christian Conquistadors viewed the indigenous population of the new world.

In conclusion, the letters that Cortés wrote to Charles V was a tool to receive justification for conquering the Aztecs to create the region of New Spain. This document does have a bias within the documentation, but it provides a first-person account about the lifestyle and structure of the Aztec society. In conclusion, Cortés did cover a significant amount of information about the Aztecs, by providing a person view into the world.

The Second Letter of Henan Cortes to Charles V. (2016, Aug 14). Retrieved from http://studymoose.com/the-second-letter-of-henan-cortes-to-charles-v-essay 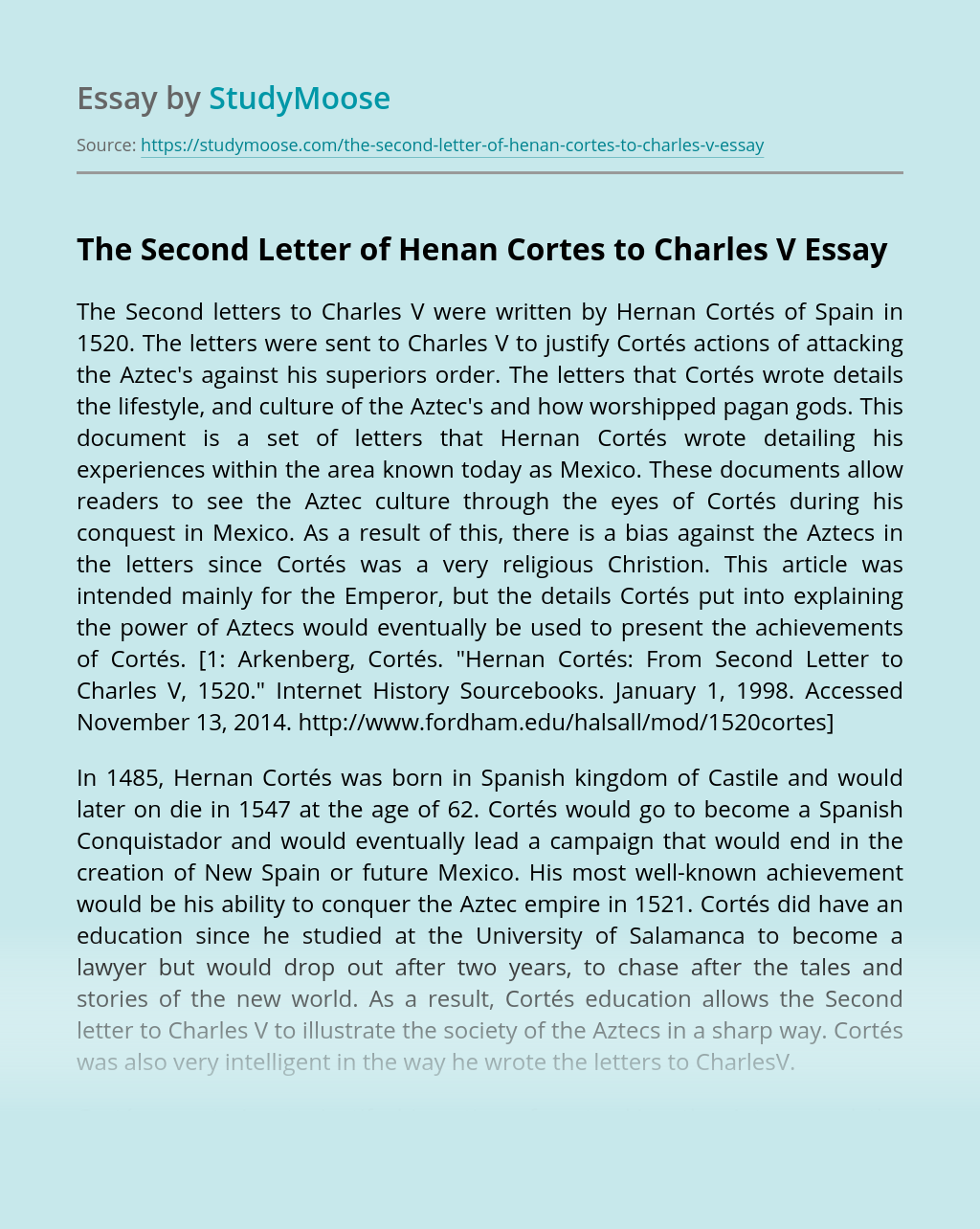 Don’t waste time
Get a verified writer to help you with The Second Letter of Henan Cortes to Charles V
Hire verified writer
$35.80 for a 2-page paper
Stay Safe, Stay Original