The Modern Elements in Arthur Pinero’s
“The Second Mrs. Tanqueray”

As a modern writer, Arthur Pinero has presented a great amount of modern elements in his work. For instance, his tragedy “The Second Mrs. Tanqueray” has a marvelous collection of these elements. Stage direction, Defamiliarization, mystery, metatheatrical technique, Surrealism, impressionistic monologue, psycho patient concept, violating the unity of time, and cubism can all be found in this play, but one never knows the exact depth of words and the different worlds they hide.

Don't use plagiarized sources. Get your custom essay on
“ Modern Elements in Pinero’s “The Second Mrs. Tanqueray” ”
Get custom paper
NEW! smart matching with writer

In fact, at the beginning of each act, a stage direction is found to guide the actors about where to stand and how to react. It, also, presents a description of their facial expressions and gestures , along with their tones of voice. Moreover, a stage direction gives some details about the characters’ social class. For instance, the stage direction at the beginning of Act I introduces Aubrey Tanqueray as a member of the upper-class, for his chambers have, “A richly and tastefully decorated room, elegantly and luxuriously furnished.

Furthermore, Pinero manipulates another modern element called Defamiliarization. In the 19th century, the Russian Formalist Critic Victor Shklovsky says that the modern writers should come up with something new as means of experimentation. In “The Second Mrs. Tanqueray,” Pinero inserts few French words in his English text for the sake of defamiliarization. For example, he says “Mesalliance” instead of “Unmatchable marriage,” “Vin ordinare” instead of “Ordinary wine” and “L’age critique” instead of “The critical age” in Act I.

The modern audience is supposed to be cultured, so he/she is expected to understand the text. Since ambiguity and mystery are praised in modern drama, Pinero has employed these elements in his play as well. This matter is clearly seen in the first act, in which Aubrey tells his friends Jayne and Misquith that their friendship must come into an end, now, because he will remarry. He insists that they will not remain friends when they know the second Mrs. Tanqueray. Aubrey, here, is ambiguous.

He hides the identity of his new wife keeping his friends in suspense. Most importantly, at the end of Act III, Paula insists on telling Aubrey the truth about her previous relation with Hugh Ardale, who has come to marry Ellean. This mystery has different interpretations, one of which is that, Hugh was the first man in her life who broke her virginity, betrayed her, and refused to marry her. Hence, this matter has led her to the path of prostitution. Another interpretation for the matter is that, Paula is trying to show herself as a good mother to Ellean. She does not want her daughter, as she thinks of Ellean, to marry such an indecent man like Hugh. Furthermore, according to Christianity, Ellean cannot marry a man who has slept with her stepmother; for if Hugh marries Ellean, it will be an incest. Lastly, this mysterious insist on telling Aubrey can be seen as Paula’s jealousy. She is jealous of Ellean, and how her relation with Hugh is better than her previous relation with him. Although she has lived with him, Hugh does not see Paula as his wife, for he, like everyone, is attracted to her physically not spiritually. Hence, he chooses Ellean as his wife describing her, ” as good as my own mother.” In addition to the previous elements, Pinero, also, manipulates the Metatheatrical technique, which is found in Act I. Close to the end of that act, Aubrey converses with his friend Cayley Drummle after Jayne and Misquith has left, and reveals the identity of his new wife.

Knowing that it is Paula, the prostitute, Drummle understands and admires Aubrey for being tolerant. He, then, tells him that, “I’m merely a spectator in life; nothing more than a man in a play…, I love to see certain characters happy and comfortable at the finish.” Drummle, here, is trying to remind the audience that he is actually an actor in a play, so what they watch is not reality. Using this method, Pinero has violated Aristotle’s Dramatic Illusion, which states that the audience must believe what they see as reality. Furthermore, Pinero employs another modern element called Surrealistic technique in the play. Surrealism is, in fact, an anti-realistic technique that was coined at the beginning of the 20th century. It is used in drama to make an oppressed character fight for her freedom against a totalitarian force. The fight is like a nightmare in the play. Andre Breton says that violence should be confined to the language only, and this is true as far as Paula’s quarrels are concerned. However, the other Surrealistic leader Antonin Artaud believes that violence should be shown in both language and action. It is worth mentioning, that the Surrealistic fight, though painful, is humorous, and includes grotesquery.

A sample of this technique is seen in Act II, in which Paula quarrels with Aubrey about Ellean’s trip with Mrs. Cortelyon. She becomes extremely angry at Aubrey, for she understands that he aims at isolating Ellean from her bad influence. She knows that Aubrey still sees her as a fallen woman like everyone, as she states, ” I can’t be so useful to your daughter as such people as this; and so I’m to be given the go-by for any town friend of yours.” In order to annoy him, Paula decides to invite her friend Mabel, a prostitute who has married George Orreyed, as a revenge for her dignity. In fact, Pinero’s aim of using the Surrealistic technique is to incarnate Paula’s verbal fight with Aubrey and Ellean. In fact, Paula’s fight with Ellean, in Act II, presents two modern elements, the psycho patient concept and the impressionistic monologue. In that act, Paula inquires about the reason that makes Ellean behave coldly with her. Ellean tells her that her mother has appeared in her dream, before, telling her to love her father, but she has not told her to love Paula yet. Paula, then, tells Ellean, ” Dreams are only a hash-up of one’s day-thoughts, I suppose you know.

Think intently of anything, and it’s bound to come back to you at night.” Then, she plays the role of a Psychoanalyst by telling Ellean that she has got a complex after her mother’s death, which is the reason for seeing her in her dreams. Because Paula is vulgar, Ellean does not accept that. Here, Paula is echoing the Austrian Psychoanalyst Sigmund Freud’s theory of Psychoanalysis. According to Freud, a psychoanalyst treats a psycho patient by listening to him and allowing him to verbalize his thoughts, past conflicts, fantasies and dreams. In his book “The Interpretation of Dream”, Freud says that dreams are symbolic of what a person is unconsciously think of, similar to what Paula has stated.

Freud says, that an analyst interprets to his patient his thoughts, fantasies and dreams, the, relates them to his present life; creating an insight for resolution of the problems. The analyst honestly clarifies the patient’s life wishes and guilt, then, confronts him with his complexes to undo them; and that what Paula has applied on Ellean. Since Ellean gets angry, Paula tries to justify her aggression. She tries to draw Ellean’s sympathy and love by telling her that she has been through several tragedies in her life that turn her to be like this. She tells her, “I’ve talked to you as I’ve never talked to a woman in my life.” Paula wants Ellean to love her and asks her, ” Kiss me!” Instead of sympathizing with Paula, Ellean turns her back coldly, a matter that pushes Paula to become extremely angry and start yelling at Ellean. This part presents an impressionistic monologue. This kind of monologue is along speech said by a character to another one who listens to her/him.

This character expresses her/his inner conflicts. The impressionistic monologue reflects psychological realism and depth in characterization. What Paula has said previously represents her psychological depth and introduces her as a psycho patient, as well. Pinero, also, violates the unity of time at the same act. When Mrs. Cortelyon offers to take Ellean with her to Paris then London, she states, ” I’m going to Paris tomorrow for a week or two before settling down in Chester Square.” She , also, asks Aubrey to let Ellean stays with her in town “during the season.” Here, Mrs. Cortelyon tends to take Ellean for about 2 months, a matter that reflects the modern sense of violating time. Last but not least, Pinero has , also, experimented with Cubism in his play.

In fact, Cubist writers at the early 20th century used to hide some parts from the text. They believe that matters overlap one another in reality because no one can see an item from all sides at the same time. This idea of missing parts or incomplete text is attributed later to the postmodern writers who dismantle the text then reassemble it to look incomplete and ambiguous. Ambiguity, in fact, is praised in modern drama since it stimulates the audience to contemplate and think of what is missed in the text. Similarly, Pinero, in “The Second Mrs. Tanqueray,” skips some details expecting the cultured audience to think and guess of what has happened in the missing part. For instance, It can be imagined that after Paula has left Highercoombe in a rage at the end of Act II, Aubrey makes it up with her when she returns.

Actually, Act III opens with the Orreyeds enjoying themselves at Highercoombe, a matter which indicates that Aubrey accepts the Orreyeds’ visit and welcomes them to please Paula. To conclude, despite the fact that he is described as a traditional writer, Pinero has presented himself as a real modern writer. He has experimented with several modern techniques that have not been coined yet as his time. Briefly, his new techniques have aided “The Second Mrs. Tanqueray” to survive until the 21st century. 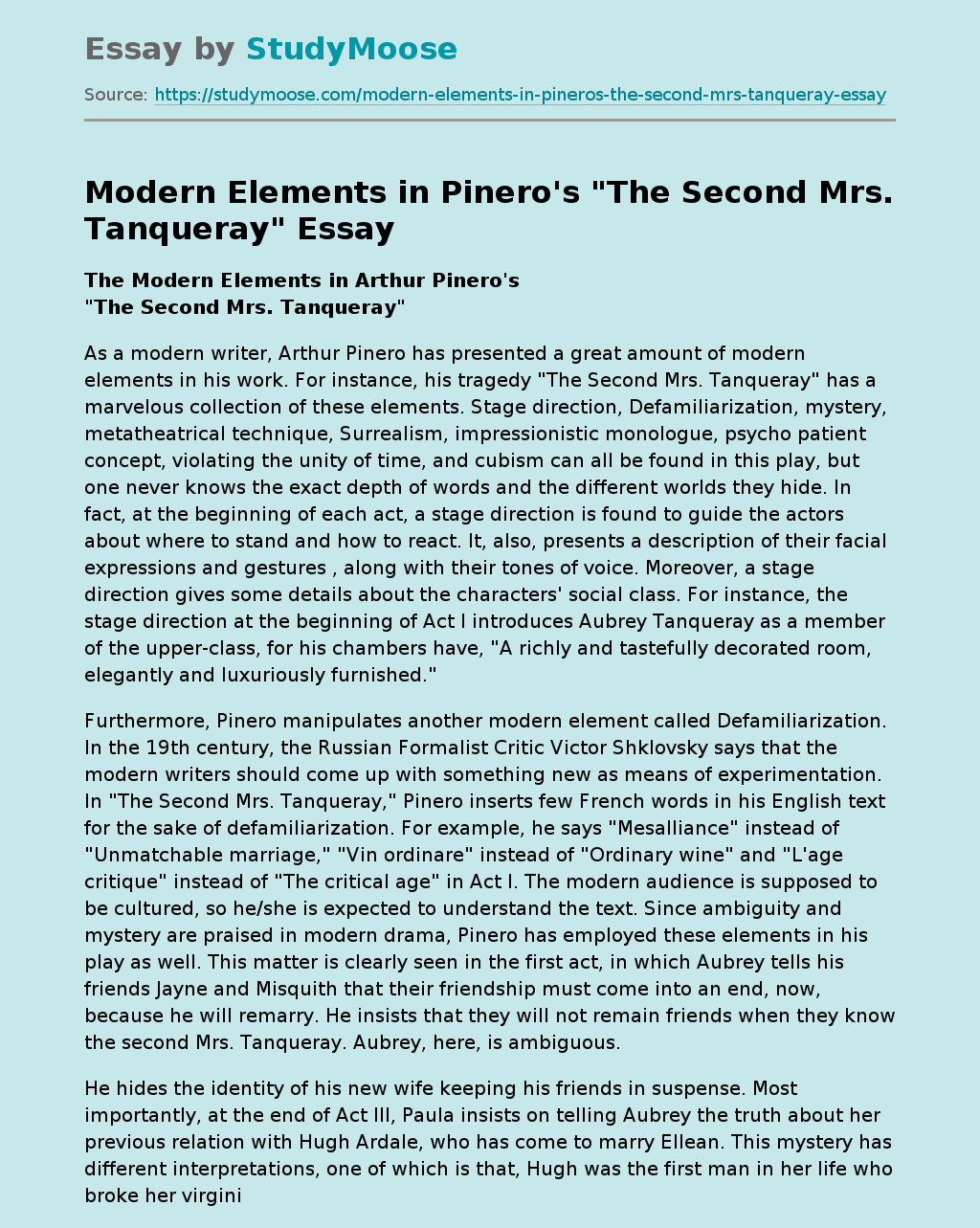