Elements of a State and Philippine Constitution

A community of persons more or less numerous, permanently occupying a definite portion of territory, independent of external control, and possessing an organized government to which the great body of its inhabitants render habitual obedience (De Leon, 2000).

The Philippines is a state.
Elements of a State

Don't use plagiarized sources.
Get Your Custom Essay on Elements of a State and Philippine Constitution Just from $13,9/Page

There is no specific number of people required living within a state so that it could be called a state.

The second element is the territory, which is the established area that rightly belongs to the people of the state. This is the aerial (air), terrestrial (land), fluvial (stream/river), and maritime (water) domains of the state.

The third element is the government, which is the agency to which the will of the state is expressed, created and administered.

This is a group of people or institutions which run and rule the society.

The fourth element is the sovereignty, which is known as the supreme power of the state to command and enforce obedience its will from the people.

According to Article One, National Territory, of The 1987 Constitution of the Republic of the Philippines: “The national territory comprises the Philippine archipelago, with all the islands and waters embraced therein, and all other territories over which the Philippines has sovereignty or jurisdiction, consisting of its terrestrial, fluvial and aerial domains, including its territorial sea, the seabed, the subsoil, the insular shelves, and other submarine areas. The waters around, between, and connecting the islands of the archipelago, regardless of their breadth and dimensions, form part of the internal waters of the Philippines.”

This means that all the area that is encompassed by 185 kilometers (100 nautical miles) from the Philippine shore, under the seabed even, is a territory of the Philippines. This is sometimes also known as the “Philippine Area of Responsibility”, a term used by PAG-ASA and other weather agencies to determine for example, if a typhoon or a Low Pressure Area has entered our territory.

Constitution of the Philippines

(1) Sovereignty of the people;

(2) Renunciation of war as an instrument of national policy;

(3) Supremacy of civilian authority over the military;

(4) Service and protection of the people as the prime duty of the Government;

(5) Separation of Church and State;

(7) Separation of power among the various branches of governments; and

One of the central components of the Constitution is the Bill of Rights, which declares and enumerates the basic rights and liberties of the people which the government (or any person) is forbidden to violate or encroach upon. Among the rights granted by the Constitution are:

(1) Due process of law and equal protection;

(2) Right against unreasonable search and seizure;

(4) Freedom of speech, of expression, and of the press;

(6) Liberty of abode and travel;

(7) Right to information on matters of public concern;

(8) Right to form associations for purposes not contrary to law;

(9) Right to a just compensation when private property is taken for public use;

(10) Right against impairment of contract;

(12) Rights pertaining to persons under investigation;

(14) Rights of the accused in criminal cases; and

(15) Right to speedy disposition of cases.

Philippine Constitutions | Official Gazette of the Republic of the Philippines. (n.d.). Retrieved from http://www.gov.ph/constitutions/

The Constitution of the Philippines: An Overview | Herald Digital Law Philippines. (2011, February 1). Retrieved from http://philippineslaw.wordpress.com/2011/02/01/the-constitution-of-the-philippines-an-overview/

Elements of a State and Philippine Constitution. (2016, Apr 22). Retrieved from https://studymoose.com/elements-of-a-state-and-philippine-constitution-essay 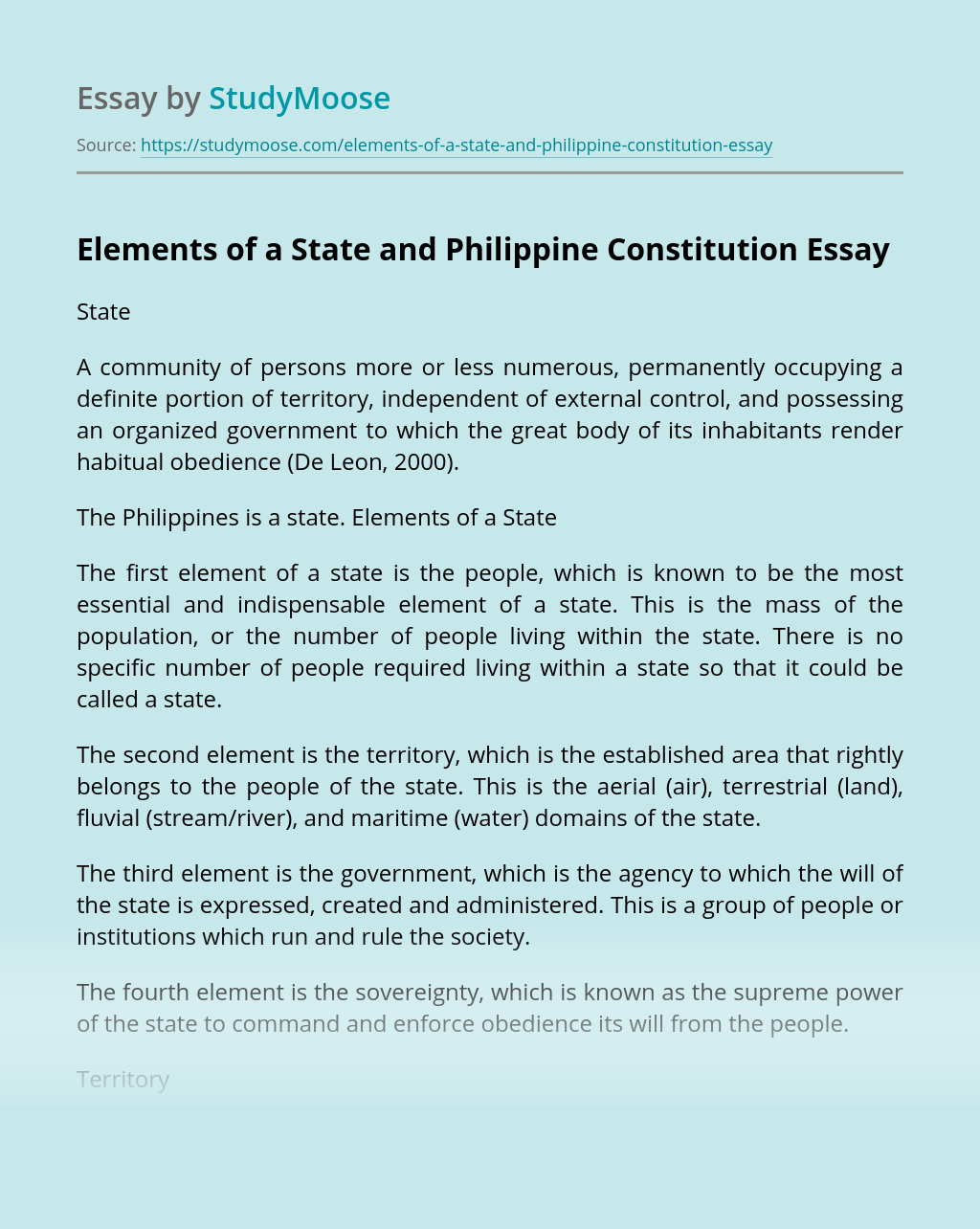 The Advantages of ASEAN for Politics and Economy

The Association of Southeast Asian Nations (ASEAN) is a political and economic organisation of ten countries located in Southeast Asia, which was formed on 8 August 1967 by Indonesia, Malaysia, the Philippines, Singapore and Thailand. Since then, membership has expanded to include Brunei, Cambodia, Laos, Myanmar and Vietnam. This popular organization in Asia benefits a...

Political and Social Apathy, there are two faces of apathy. The first considers apathy as a choice and participation in public life a consequence of one’s affirmative use of freedom. The second face of apathy arises when citizens are led to believe that their personal needs are not part of the political agenda, resulting into...

Get Essay
Indigenization of psychology in the Philippines

The status of efforts to indigenize psychology in the Philippines is reviewed. We address progress in four aspects of indigenization: theoretical/conceptual, methodological, topical, and institutional. Much, but not all, of this progress is the result of efforts associated with the indigenous Sikolohiyang Pilipino (Filipino psychology) movement, which emphasizes (a) the development of a Filipino psychology...

Economic Problems of the Philippines

Economic problems of the Philippines are very similar to those being battled by other underdeveloped and developing nations. After a long tryst with colonization, the nation is now grappling with increased imports and a mixed economy that is still to stabilize. The Republic of the Philippines is located in Southeast Asia and Manila is its...

History And Legend Of Mayon

Her unsullied splendor can not be denied. The sight of her can take one’s breath away. She is merely radiant as she stands high and grand in the horizon. She is really a one of a kind beauty that mesmerizes anybody who pays her a visit. You have to be visually challenged to miss her...