Charles Manson had experienced a very bumpy childhood being the son of a teenage, bisexual, alcoholic prostitute. Being shuffled between homes of relatives and orphanages, it is not surprising to see that his criminal activity sprouted from a very early age. Manson’s incredible charisma attracted many hippies and he managed to earn himself s reputation as god-like in the eyes of many beautiful girls. When Manson and his “Family” settled down in Spahn Ranch he was able to sleep with a different girl each night.

Don't use plagiarized sources. Get your custom essay on
“ Charles Manson ”
Get custom paper
NEW! smart matching with writer

Not only this, but he had the power to make his Family members murder whomever he was unhappy with. In fact, the Family members were often more than happy to commit murder is it pleased Charles Manson.

The Family used particularly gruesome methods of homicide and one woman had even contemplated carving an unborn baby out of the body of a murdered woman, as it would have made Manson proud. Charles Manson managed to brainwash his followers and make them worship like a god.

He abused power severely by ordering his Family members to kill people, often random, for his satisfaction. Being in his position, he could have prevented all the murders however he chose not to, and never hesitated to even discourage them.

Charles Manson is best known for the murder of Sharon Tate. Actually it would be more accurate to say Charles Manson and his “family” murdered Sharon Tate, and actress and wife of director Roman Polanski. The victims of the Manson family included Sharon Tate and her unborn baby Paul Richard Polanski, as well as her guests that evening, Abigail Folger, and her boyfriend Voytek Frykowski, and an internationally known hair stylist Jay Sebring.

The day after those murders the family killed Leno and Rosemary LaBianca. Before either of these murders took place part of the family murdered Gary Hinman. A man named Donald “shorty” Shea was also killed. The Manson Family also eventually killed defense attorney for one of the Manson Family members, Ronald Hughes, during the course of the trial.

So why would Charles Manson lead a number of followers to commit these horrendous and meaningless crimes? Manson knew the layout of the Polanski house. It is quite possible that the crimes were committed at that house because Manson wanted to scare Terry Melcher for not backing his recording career. Terry Melcher, was a man in the music business. Manson tried unsuccessfully to convince Melcher to finance a film in which Manson’s music could be used. Melcher once lived in the Polanski house, and thus by killing tenants, the Family could scare him. Some people in the family believed that it was done because it would spark nation wide publicity and the murders would be “noticed.” The Manson Family murders are certainly the most bizarre acts of serial murder the United States has ever seen. The reason is that Manson’s motives do not fit under the more common motives held by serial killers.

In conclusion I think Manson was a coward, he dragged desperate and innocent people that didn’t know any better, into his problems. After brain washing his people he told them to do the killing, actually never committing a murder himself. These murders were so bizarre because what would you expect from a bunch of brainwashed hippies, tripping out on acid. They were legally insane therefore, I don’t think they really knew what they were doing most of the time, which made things worse. 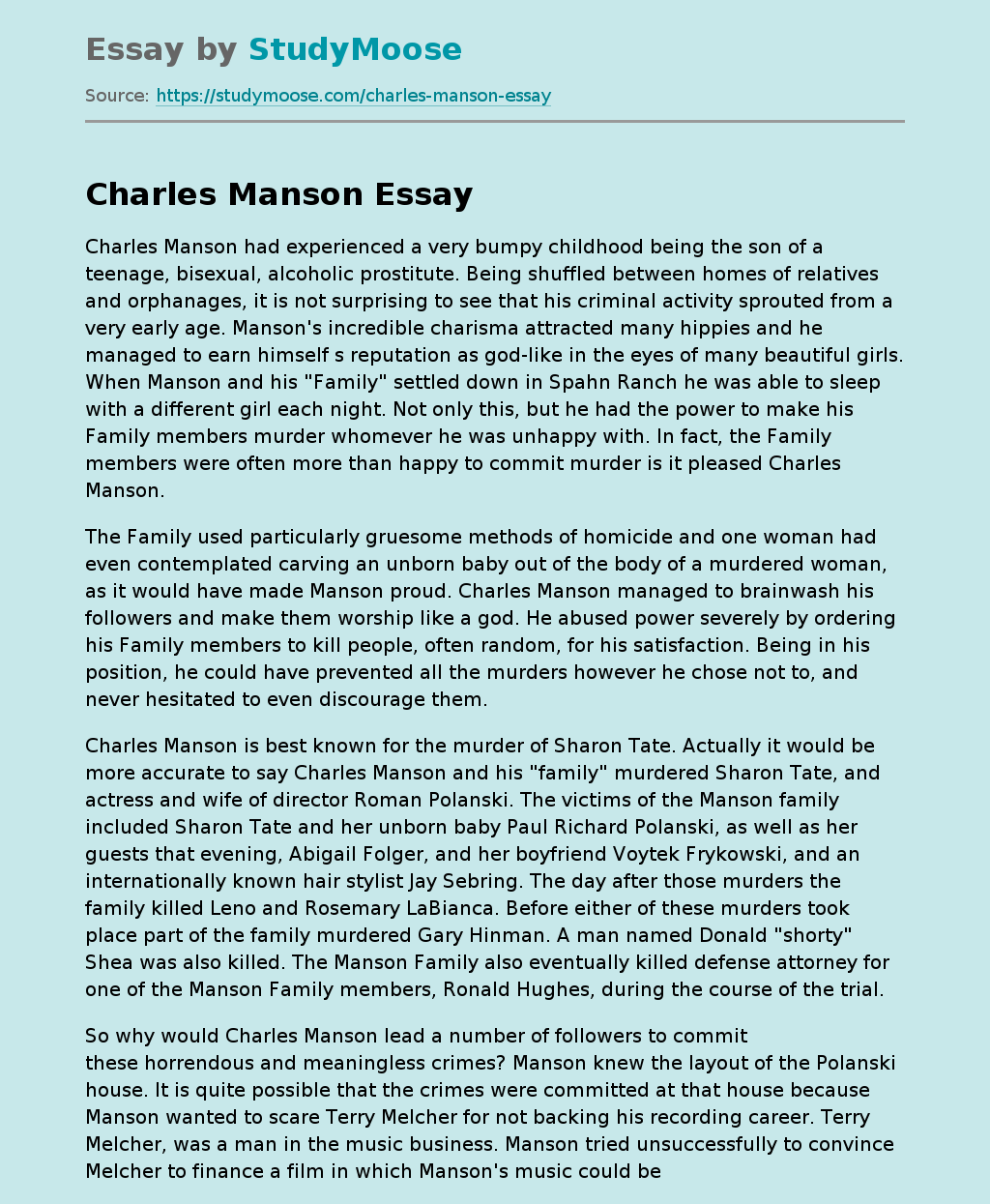