Andy Warhol’s Use Of The Controversial Pop Art Style

Art in the past was rarely used as a commercial technique until around the mid-20th century. Artist Andy Warhol initiated the visual style of pop art in order to explore relationships between advertisement, popular culture, and artistic expression. Although Warhol revolutionized pop art throughout the 1970s in the United States and around the world, he essentially utilized popular icons in order to become iconic– which brings up controversy about whether he was a visionary genius, a sell-out, or an amazing businessman.

Don't use plagiarized sources. Get your custom essay on
“ Andy Warhol’s Use Of The Controversial Pop Art Style ”
Get custom paper
NEW! smart matching with writer

There were very few known artists who had experimented with pop art before Andy Warhol. However, one artist who created pop art slightly prior to and around the same time as Warhol was Roy Lichtenstein, whose works were inspired by comic strips. Andy Warhol, who was born on August 6th, 1928, mentions in an interview in 1971 that he was also inspired by comic strips, as well. Warhol grew up with his impoverished European immigrant family in Pittsburgh. As a child Warhol had diseases including Sydenham’s chorea and Hypochondria, which was the reason he was bedridden for the majority of his childhood.

the instigation of his skill-set, preferences, and personality; as he would lay in his bed during those years, he would draw images of the movie stars he would hear about while listening to the radio. When Warhol was a teenager he graduated high school and originally was looking to attend the University of Pittsburgh for art education but ended up attending Carnegie Institute of Technology for commercial art.

Here he learned strategies to skyrocket his career. During the 1950’s Warhol first gained fame for his drawings for shoe advertisements. He was then hired by RCA Records to design promotional materials and album covers. It wasn’t until the 1960’s that Warhol started to draw iconic American objects like dollar bills and Coca-Cola. Warhol spent the 1970’s decade by finding many rich patrons, like John Lennon and the Shah of Iran, to support his career.

Andy Warhol challenged society with his business tactics and his celibacy. Around Warhol’s era, the typical art piece would have been a lot less vibrant and a lot more relaxed than the works Warhol created. The artistic norm would be to advocate certain social characteristics such as promoting nationalism, eating at diners, and spending time with family. Warhol’s money was a very important influence to his decisions to challenge the artistic norms in society. Warhol himself stated that “making money is art, and working is art and good business is the best art” (Warhol). He can be viewed to have been a rather materialistic man, and therefore had qualities that could have made him seem as if he was betraying the heart of true art in exchange for his fame and fortune. Warhol became popular by promoting what was already popular at the time with works such as Campbell’s Soup Cans (1962)– which advocates delicious Campbell’s soup), and Marilyn Diptych (1962)– which promotes actress Marilyn Monroe). He also made a portrait in 1973 called Mao, which displays the image of famous Communist leader Mao Zedong. He later portrayed vocalist Mick Jagger of the classic band The Rolling Stones by creating a portrait called Mick Jagger (1975). If an artist gives people an image that they are already familiar with or already enjoy, it is more likely that they will become more familiarized with the artist and will enjoy the artist, as well. Warhol also became famous by using aesthetically pleasing images as his focal points so that viewers would associate his work to be more attractive. A popular quote from Warhol is “I believe in low light and trick mirrors. I believe in plastic surgery.” Warhol meant by this quote that he liked to demonstrate outer beauty before inner beauty, as unnatural beauty was even more appealing to his audiences than natural beauty was. Even in today’s society the public will go through extremes to possess a certain kind of beauty, which is very relatable to Warhol’s opinions on plastic surgery. Another way Andy Warhol challenged society’s norms was with his sexual orientation. Warhol identified himself to have been homosexual, and even though he had several male partners throughout his years he remained a virgin his entire life. Benjamin Kahan, who is a professor for Women’s and Gender Studies at Louisiana State University, stated Warhol’s celibacy to have included him into another class of sexual orientation known as asexuality. Kahan theorized that Warhol’s asexuality gave him an advantage because “he [was] not constrained or weighed down by outside influences. Warhol [could] participate in a philosophical bachelorhood, meaning that his mind [was] not married to any one idea” (Molzen). Thus, with his commerce strategies and lack of sexuality Warhol had massive potential of performing the role of being such a progressive artist.

Contemporary art styles can only emerge from radical artistic ideas, and Andy Warhol certainly possessed eccentric techniques in his artworks. He was versatile and aside from pop art works he had pieces of many different styles such as drawing, painting, photography, printmaking, film, silk screening, and sculpture. Andy Warhol added to his legacy his creation of Interview magazine, along with his book The Philosophy of Andy Warhol that was published in 1975. Some artists with works that have clearly been inspired by Warhol are Damien Hirst, Takashi Murakami, and Jeff Koons, who all currently bring pop-culture into the third dimension.

Warhol’s controversial position in the art world contributes to the way that he is ironically seen as an unconventional artist. He mentions in his book how “they always say time changes things, but you actually have to change them yourself” (Warhol). As a visionary genius, a sell-out, and an amazing businessman, Andy Warhol transformed abstract art everywhere with his innovative artistic styles and strategies.

Andy Warhol’s Use Of The Controversial Pop Art Style. (2019, Aug 19). Retrieved from https://studymoose.com/andy-warhols-use-of-the-controversial-pop-art-style-essay 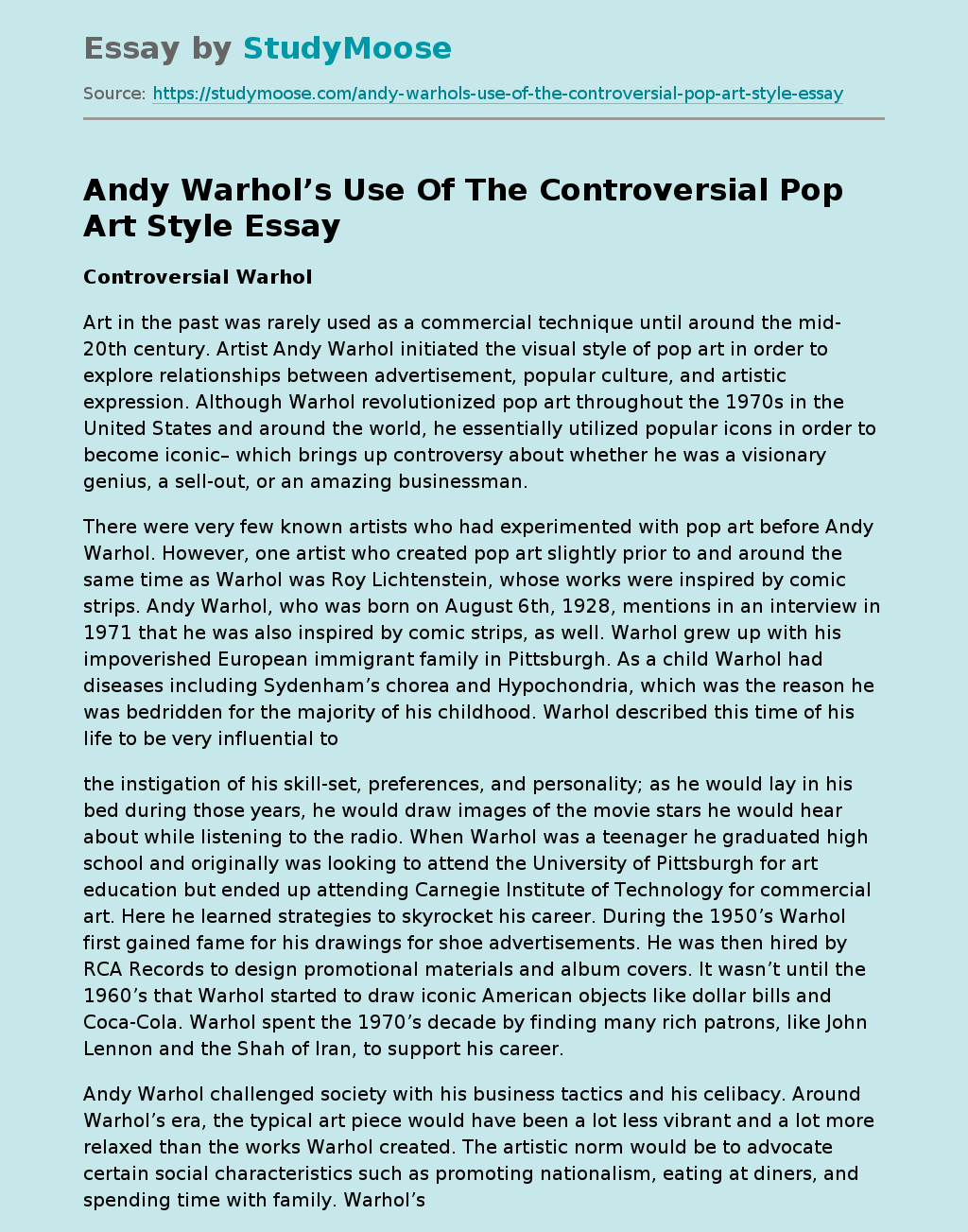