Reg Mombassa and Keith Haring are two well-known artists who both represent the pop-art movement.

Keith Haring began producing art in New York in 1980 by drawing on subway advertising boards. He felt that this was a good way for him to be able to express his work to the public.

New Zealand born Chris O’Doherty has been producing pop-art under the name of Reg Mombassa since about 1980. His earliest works became famous on the t-shirts of a well known Australian surf brand, Mambo.

Don't use plagiarized sources. Get your custom essay on
“ Popular culture ”
Get custom paper
NEW! smart matching with writer

Haring’s “Best Buddies”, produced in 1990, is very simple, two-dimensional and brightly coloured. Made from a silkscreen print, its simplicity is intended to attract attention and instantly convey the message that friendship is good. The figures have no obvious sex or race, which puts forward the message that friendship is for anyone and everyone.

In contrast, Mombassa’s interpretation of the biblical scene of “The Temptation” is highly detailed with strong colours, and conveys many complex messages.

The most obvious message is that of today’s temptation of material objects, represented by the toaster, and the violence and crime for solving society’s problems, which is represented by the gun. This ‘Garden of Eden’ is set in Australia’s outback, showing that Mombassa’s main influence is Australian society.

Each artwork is conveying its own strong social comment, and presenting it in different ways. Haring has used bright, bold colours and dark lines to put forward the message of the vitality of friendship, through two unidentifiable abstract figures.

This means that Haring has left the responder to decide what race and sex the figures are, reinforcing the point that these factors are not important when choosing your friends. This is in comparison with Mombassa’s detailed image of a well known biblical scene, using strong colours and a slightly more realistic overall picture.

The simplicity of Haring’s artwork conveys the social message instantly, where as Mombassa’s artwork requires the responder to study and analyse the detail and hidden messages behind the image.

Haring created his simple artwork for the fast-paced lifestyle for the general public in the city New York. The image is easy and quick to absorb and therefore is more greatly appreciated by the busy day-to-day viewers.

The more leisurely lifestyle of Australia in the nineties was able to take time to appreciate the complexity of Mombassa’s detailed artwork. Due to this, it was easier for the public to deconstruct the many messages hidden throughout the artwork.

Both artists have been able to reach the masses through t-shirts and other publicly exposed works and have become well accepted by the general public. Their work has served to influence many people with the message that they portray and have become part of every day life. Their art has been worn on t-shirts by people all over the world for decades. 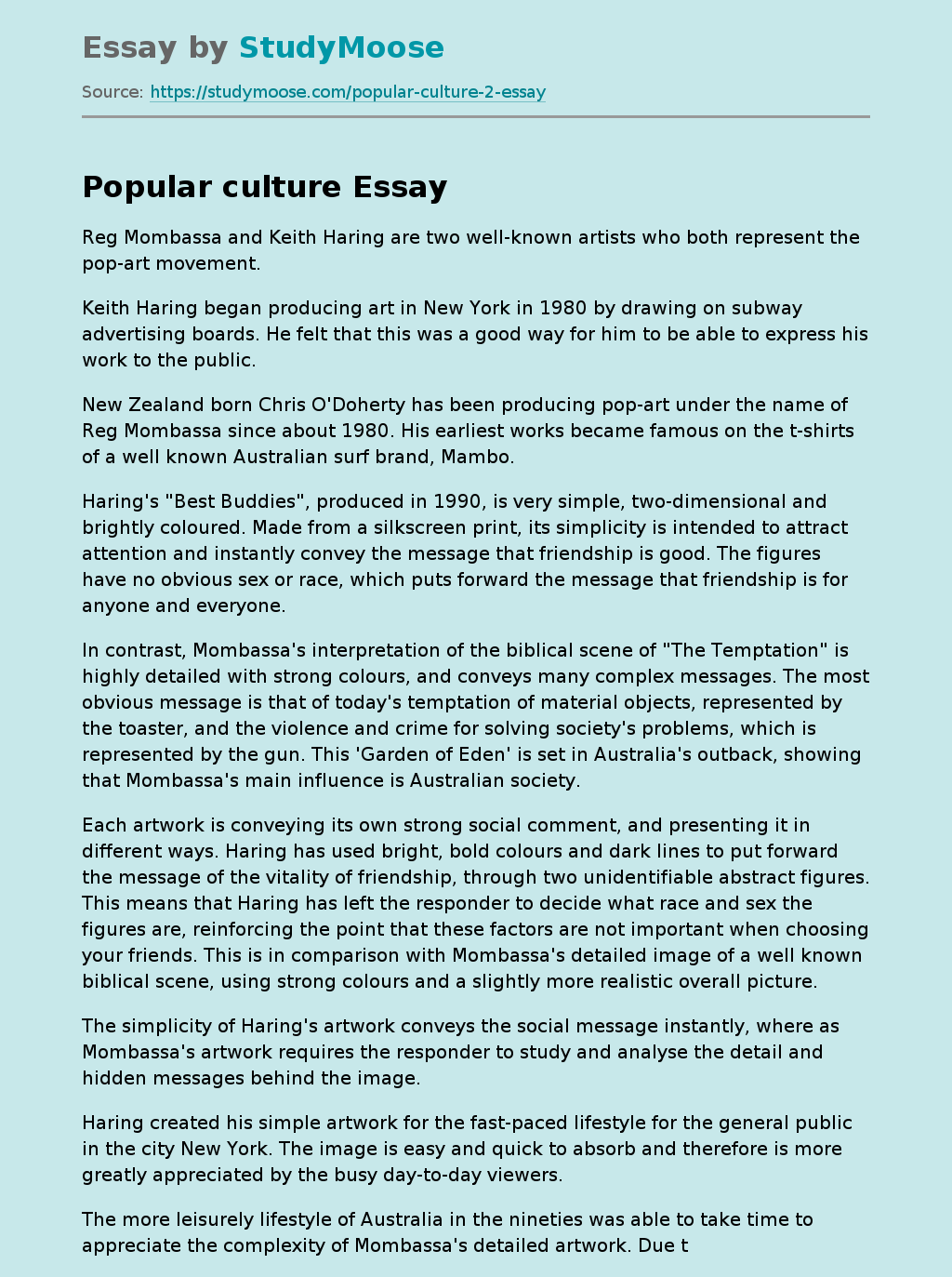