Behaviour of Fish in an Egyptian Tea Garden Commentary

In the poem “Behaviour of Fish in an Egyptian Tea Garden” by Keith Douglas, a beautiful woman uses the power of seduction to attract many men. Douglas uses simile to describe the woman as a “white stone” while calling men different types of fish like “magnate, an important fish” and “flat-eyed fish”. Throughout the whole poem, Douglas seems to use the word “fish” many times. It seems he is describing the environment as an aquatic environment. Since it is third person limited, the reader does not know what the males are thinking, but using imagery the reader can know how they look at her and it is clear that the males are attracted to her.

Don't use plagiarized sources. Get your custom essay on
“ Behaviour of Fish in an Egyptian Tea Garden Commentary ”
Get custom paper
NEW! smart matching with writer

The poem contains seven stanzas with four lines in each stanza. It is a narrative poem because it has a plot about a beautiful woman trying to use her ways of seduction, but the men are too threatened of it and they soon run off. There is no rhyming scheme although there are some rhymes like “afternoon” and “spoon”.

Each stanza does not have rhyming endings, only four out of seven stanzas have a rhyming scheme. An interested thing that the readers might notice is that each line has about nine or ten syllables.

In stanza one, Douglas introduces the woman as a “white stone” and she “draws down the fish” (L.1). The first line describes the woman’s beauty and how it attracts the attention of all of the men in the room. The woman is most likely sitting and trying to look beautiful so all the men would want her.

The woman “Draws down men’s glances and their cruel wish for love.” (Line 3) The woman is not doing anything and yet she has already done so much. Not only did she make the men look at her, but it seems they are also thinking about her and how they want to be with her.

In stanza two, the reader learns about the woman’s way of seduction. “Slyly her red lip on the spoon/ slips in a morsel of the ice cream” (L.4, 5). Most men have a dirty mind, so when she put that spoon full of ice cream in her mouth, she got the men’s full attention. She is also wearing many different cosmetic accessories. She is wearing red lips stick and red nail polish while looking white or a “milky stone” (L.6).

There is this one man in stanza three that seems to have a little bit more interest in the woman.”A cotton magnate, an important fish” seems to like her since he is looking from across. The man was going to walk out, but after seeing her one more time he decided to stay to watch her some more. The next man in stanza four is an old man described as a “crustacean old man” who is sitting near her. As he is there staring at her just like every other man, he tries not to stare anywhere else but her face. He “might see her charms through the fissures where the eyes should be or else his teeth will parted in a stare” (L.14-16). What the author is saying is that if the man looks below the neck region, his jaw will drop because of his perverted thoughts.

A third man known as the “lean dark mackerel” tries to look as if he does not care too much about the woman. “The flat-eyed fish sucks on a straw, staring from its repose, laxly.”(L.19, 20) He is still attracted to her since he turned around to look at her, but he seemed calm and cool because he was resting and looking at her in a peaceful manner.

In stanza six, they talk about a man who is stepping up and attempts to do what every man wants to do with her. Every man wants to be with her, but everyone is threatened. The man is “circling and passing near the white attraction.” (L.22) The man is trying to have to get the confidence to ask her out, but he never does. He was to afraid of what would happen so he never had the opportunity. Since the ice cream is now gone, the men don’t seem to be attracted to her anymore. “The fish swim off on business/ and she sits home alone at the table” (L.26, 27). Douglas is saying that the woman lost her power of seduction and she is no longer the attraction and every man has left since she is not as beautiful anymore. She is a “white stone/ useless except to a collector, a rich man.” (L. 27, 28) The quote means she is no longer the thing that the men are interested in and the only way she will get someone to be with her is if she becomes a trophy wife.

In the end of the poem, it comes to a sad end. The woman is lonely as the men go on with their busy lives. Throughout the whole poem, she was trying to use the power of seduction, but ended up teasing everyone away. As a reader, it comes to no surprise that she did not get anyone because being a tease is no way to get a man or a woman. Therefore, justice has been served as she ends up alone.

Behaviour of Fish in an Egyptian Tea Garden Commentary. (2017, Feb 09). Retrieved from https://studymoose.com/behaviour-of-fish-in-an-egyptian-tea-garden-commentary-essay 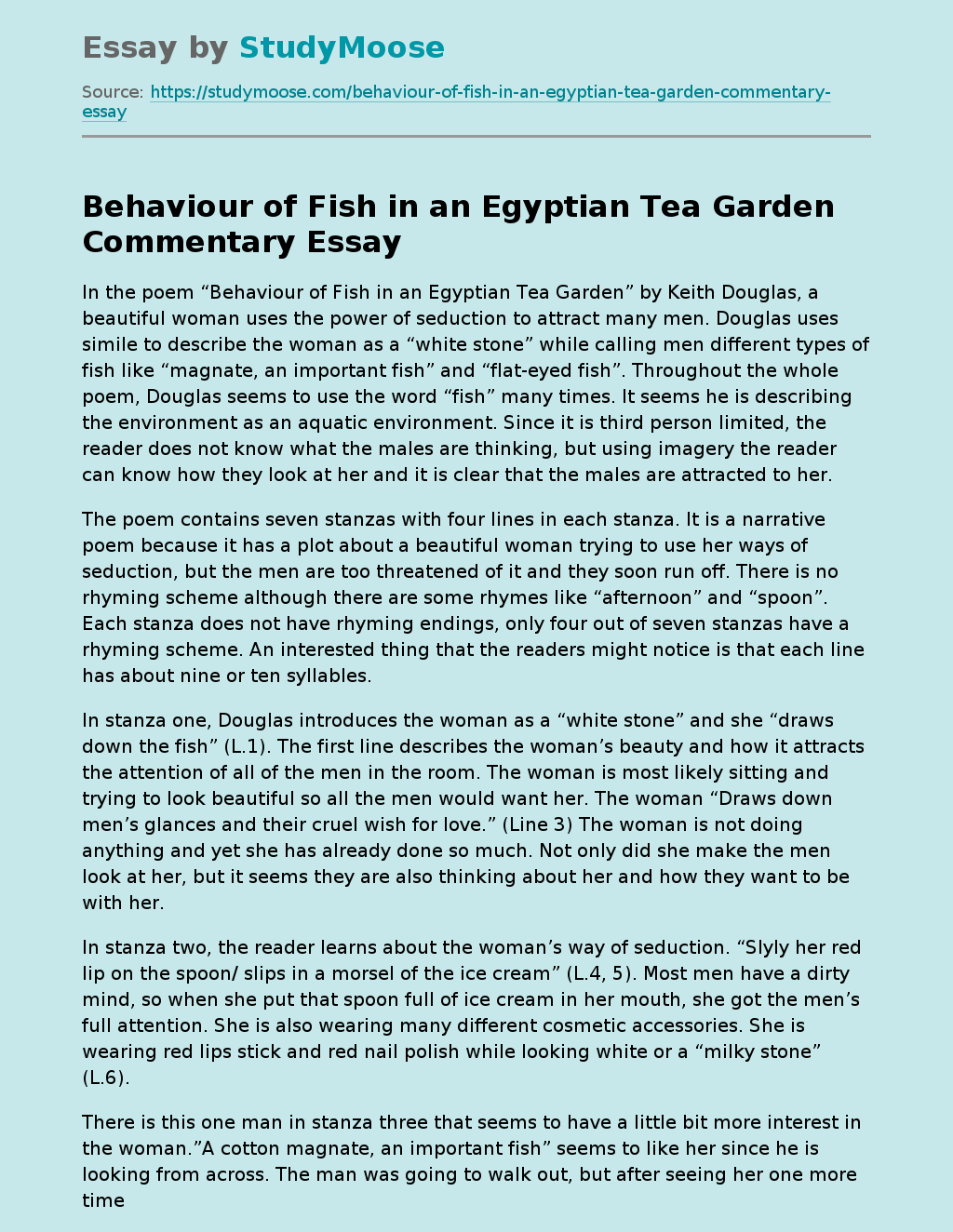