What is the goal in a poem? Why do writers write? Most poems are an attempt to pass on a message, to give a moral, or in any case, to communicate in one way or another. An example of a writer doing this in a poem may be seen in An Old Man’s Winter Night, by Robert Frost. Robert Frost (1874-1963) wrote An Old Man’s Winter Night, perhaps his most well conceived work and published it in the book ‘Mountain Interval’, released in 1920 as a fine peak to his career.

Don't use plagiarized sources. Get your custom essay on
“ Analysis of Robert Frost’s “An Old Man’s Winter Night” ”
Get custom paper
NEW! smart matching with writer

The poem tells the story of the last night before an old man’s death. This man is portrayed as being lonely, and without meaning to anyone except for himself. The old man seems to realize this in a certain point in the poem, and decides that he no longer wants to live. He then goes to sleep, however soon after he is disturbed by the shifting of a log.

He then shifts, as the log did, and dies seemingly without pain, “still sleeping” as Frost says. The poem appears to have a message to transmit, which can be unveiled through some close reading. There are several reasons which convince the reader that An Old Man’s Winter Night is memorable, impressive, and effectively passes on a moral.

Firstly, the reader is engaged into the scene with no information about the old man, which parallels the old man’s situation, as neither does he know how he has become what he is: “What kept him from remembering what it was / That brought him to that creaking room was age.

” Perhaps this was done to make the reader just as lost as the old man and able to enter more deeply into the old man’s character, thus being able to sympathize better with him. The old man seems to be lacking any interest in a long life and apparently has no real social life. This lack of friends is what draws us to feel for the man who clearly was not cared for in life, either due to a refusal to care for others, or because other unjustly neglected him. The man’s meaningless existence is accentuated by him constantly scaring away what seems to frighten him or makes him uncomfortable. However, the old man seems to be apathetic towards his own state.

The fact that he does not even know how he got to be so in the first place adds to this notion, and makes him seem detached from his own situation. Another factor which makes the emptiness more apparent is the “barrels round him”. One may wonder: “What is in these barrels?” As Frost does not tell us what they are, we may assume that they are empty barrels, much like the life of the man. Another factor which adds to the void of the man’s life is that the author uses possessive adjectives showing that the snow on the roof is “his” and that the icicles hanging along the wall are “his”. The reader may assume that there must be an enormous lack of subsistence to the man’s life for Frost to tell us that these completely insignificant matters are possessed by him. Overall, the reader pities the old man for his seemingly lonely, purportless, and depressing existence.

Secondly, in An Old Man’s Winter Night, Frost has artistically created metaphors with light which are overflowing with meanings that can easily be missed and yet help in drawing the poem together with a sense of cohesion. “What kept his eyes from giving back the gaze / Was the lamp tilted near them in his hand.” This helps one to understand the way the man is feeling, albeit it in a minor way and in turn aids one in working out what he is doing. He is not sitting idly, but has a lamp, therefore is not trying to sleep. We are not instructed further as to what he is attempting to do but it clearly requires thought. He cannot cope with this mental surge as his age has drawn senility, “What kept him from remembering what it was / That brought him to that creaking room was age.” Frost tells us early in the poem that he was light “to no one but himself.” This informs us that he is the only one that is in touch with himself and his existence.

This light he is to himself and the light he holds in his hand work together to make his isolation even more apparent, because the light that he holds is making him unable to see the outside. For him to be able to see outside he could simply have tilted the light towards the window, yet, one may understand that this metaphor shows that he is either unwilling to open up to others, or is afraid of what he may then see. He may have been intimidated by the out of doors which “looked darkly in at him”. This continues with the idea that he was only a light to himself because in tilting the light towards himself, he sees his reflection in the window rather than what may have been beyond the window. However, had he illuminated them so that he could see outside, they would no longer be darkly looking in at him. Frost then writes: “A quiet light, and then not even that.” One may speculate from this line that Frost is telling us that even the old man has lost touch with himself, and no longer cares about his own existence.

Frost may possibly be calling our attention to this line with the eye-rhyme between “what” and “that”. In the next few lines, the old man dies: “The log that shifted with a jolt / Once in the stove, disturbed him and he shifted, / And eased his heavy breathing, but still slept.” Perhaps the log shifting, breaking, and going out represented his light permanently going out as well. This link may be made with the repetition of the word “shifted”; the log shifts, and then the man shifts. In these lines there is also alliteration with the words “still slept”. Frost may have been drawing our attention to this to be sure that the death of the old man would have a strong impact on the reader. These lines are impressive and effective at expressing the death of the old man, and leave the reader feeling sorry for him.

Thirdly, one may appreciate how clear the final moral is of the poem. “One aged man — one man — can’t keep a house, / A farm, a countryside, or if he can, / It’s thus he does it of a winter night.” Frost generalizes the situation, by broadening “one aged man” to “one man”. He resumes the whole story, giving the reader a clear moral at the end, identifiable to all thanks to the generalization. One may believe that, ultimately, Frost is trying to show one how not to end up, and how not to die, but offers no insight as to the better way of ending the spell one spends on Earth. Perhaps he is telling us to make sure that we do not end up like this man, and that we should “tilt the light” towards others instead of ourselves, and therefore to be in touch with others.

Furthermore, it is telling us that if we do not open up towards others, and if we stay inside our own shell, with our icicles on the walls and our snow on top, isolating us from the outside world, that we shall end up in solitude and be a light to no one but ourselves, just like the old man. It may be out of context to wonder if this poem relates to the poet in any way, but it does seem rather in depth for any imagination. However, as Robert Frost was not a particularly lonely man, perhaps he was expressing a great fear of his brought forth by an incident in his surroundings.

As one may now see, there are several aspects of the poem which make An Old Man’s Winter Night memorable and effective in transmitting the author’s message. These aspects are: the reader is engaged into the scene with no information about the old man; metaphors which Frost has made with light are overflowing with many meanings; one may appreciate how clear the poem is fairly clear thanks to the generalization and how the whole of the poem thoroughly contributes to the moral. This poem transmits its idea superbly and majestically making its goal of communication accomplished. 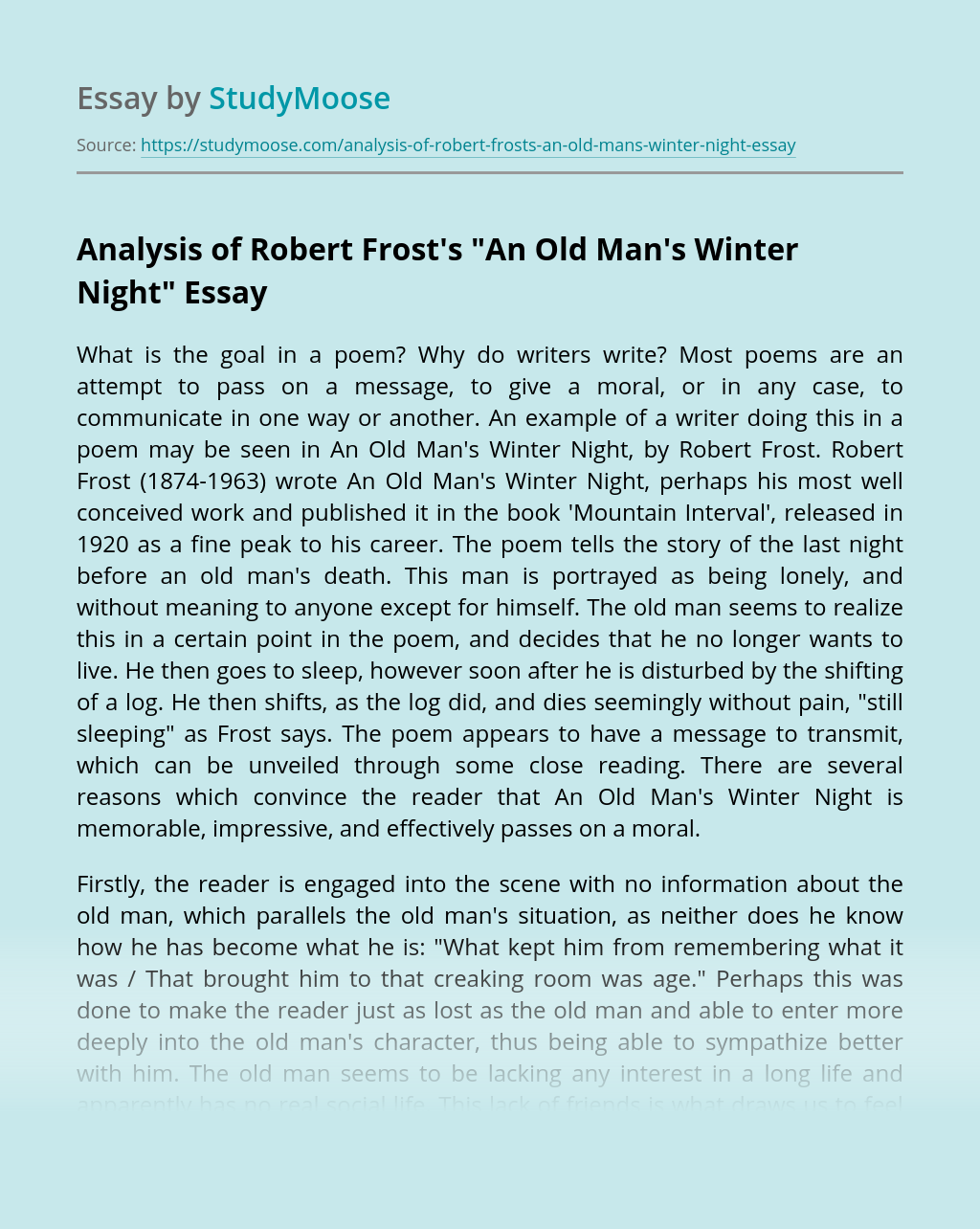