Robert Frost’s short poem “The Road Not Taken” allegedly written on the mountain interval in 1920 unites nature with a larger symbolic meaning in an elegant poetic manner. The author standing high in the sky, commanding a view of the two roads, makes the final choice, taking one road. Realizing later that the road left behind on the mountain interval is the one to which he will never return, he experiences regret, yet remains confident of the correctness of his ultimate choice.

Don't use plagiarized sources. Get your custom essay on
“ Robert Frost’s short poem “The Road Not Taken” ”
Get custom paper
NEW! smart matching with writer

The metaphorical meaning conveyed in the poem is adequately expressed with the help of a variety of technical methods including alliteration, assonance, and consonance.

The scene is set in “a yellow wood”. The wood is most probably needed by the author so as to create a pleasant natural environment that would appeal to most of the readers and put them in a romantic mood straight away. In modern days, as well as at the beginning of the 20th century, people often feel that their connection with the earth is broken to a degree by their isolation from the woods and natural habitats in urban life routine.

The wood creates a thick wall around the author that makes him impenetrable or at least shielded from outside influences and creates a quiet place where he can deliberate without hurry or harassment so as to make a good choice.

The initial scene is felt with quiet, yet decisive force of someone who had arrived at a clear choice through the process of deliberation.

The author plunged forward, toward the road he preferred. Yet his desire to follow the first road as well coupled with his realization that taking one road means abandoning another lead to sadness caused by the fact that life is not always what one wants it to be. Sometimes it offers choices that none of us want to make. This is why the author acknowledges that he “shall be telling this with a sigh somewhere ages and ages hence”. Sadness coupled with realization of his correct choice underpin the mood at the end of the poem.

The metaphorical meaning of the poem is concentrated in the image of the two roads. The author makes a choice not between the actual roads in the wood. Instead, these roads signify larger images of paths one takes in life. These can be understood in the variety of ways – as a career choice, as the choice of a vocation, as a choice in love life, or general trend of what one makes more important – serving people, for example, or self-actualization.

The points of comparison between the two physical roads parallel those that life paths have: one road, the preferred one, was “grassy and wanted wear”. This turns to be the famous road “less travelled by”. The grass on the road can be understood as symbolizing the things one can accomplish on the less travelled road, as deeds that are awaiting the person who will come and tackle the task. Choosing the road where “no step had trodden black”, Frost plunges in a complex, challenging world where new issues await at every corner.

The relationship of the author to the other road is another important revelation to the reader where yet another piece of philosophical wisdom is revealed through metaphorical means. In passing the place where the road bends in two, the author deserts the first road in favor of his preferred un-traveled one. His movement along the road, bypassing the juncture, is parallel to that of the movement in the usual case of a life choice, where one proceeds irrespective of one’s choice, abandoning all other options that were available. In a sense, this makes our lives one of forgone opportunities, for all opportunities are gained at the expense of forsaking other ones. Speaking of his progress from one road to another, the author says:

Yet knowing how way leads on to way,

I doubted if I should ever come back.

This is a good piece of knowledge for everyone moving along the road of life, since one path inevitably brings one to another from which there is seldom a return to the original set of choices. This idea can help many people articulate more responsible attitudes toward life in general and their decisions on important matters in particular.

The metaphor of the road ‘less travelled by’ is the crucial part of the poem, the one that makes different kinds of people cite the poem frequently. The author states:

I took the one less traveled by,

And that has made all the difference.

He claims that his way was made different by the fact that he was moving along a different road, not the one where crowds were heading.  The author’s path was definitely full of new discoveries and revelations, new ideas and intents that related to his unique experience as the first traveller on the remote road. He does not state what difference it made, but readers can assume that it was essential to the development of his personality and character, to broadening his horizons and teaching him to pursue new opportunities.

The relative unpopularity of the road made it work for the particular individual who was not discouraged by the absence of people on the road. The acquired experience was more than enough to compensate for his loneliness on the way. It is probably not a chance that the author brings this idea forward as the story is concluding perhaps in an effort to emphasize it beyond usual significance.

To underscore his ideas and convey them to the reader more effectively, Frost employs a number of stylistic and phonetic devices. Of special importance are alliteration, assonance, and consonance. Alliteration appears when the author uses two or more similar sounds beginning the words in a sequence to make the speech more melodious and resonant. In “The Road Not Taken” there are at least two cases of alliteration:

The first line with its repetition of “L” makes the speech flow more melodious and smooth, helping create the impression of a large heap of leaves, all combined together in a big mass that falls together smoothly and gently. In the second case, “W” is probably repeated to increase the feeling that the person is surrounded by a warm and gentle autumn atmosphere.

Assonance appears where two or more vowels are repeated. An example can be found in the first stanza of “The Road Not Taken”:

This line probably uses assonance simply to contribute to the musical flow of the story.

Consonance emerges where two or more consonant signs are repeated to create a special effect, although not necessarily in a beginning position, which makes this device different from alliteration. An example of consonance in the poem under discussion can be found in the line:

The first “L” elegantly chimes in with the subsequent ones to give the impression of sweet melody charming to the ears.

Other examples of consonance will include:

I took the one less traveled by

I doubted if I should ever come back

And looked down one as far as I could

The repetition of “D” or “T” in all these cases contributes to the feeling of strength, virility, and firm decision by the speaker. In this way, technical devices create additional feelings and impressions that contribute to the overall tone of the poem.

The rhythm of the poem includes four beats in a line. The majority of lines contain eight syllables, and all lines have an identical rhythm, which makes the poem sound melodious and easily readable. The first line sets the beats for the whole poem:

The line contains four sound units, in each the first syllable is unstressed, while the second one is stressed. The rhythm helps bring out the meaning. Thus, a so-called caesura, or pause within a sentence indicates to the reader moment where speech is halted because of a special meaning. An example can be found in the line:

…And be one traveler, long I stood …

The speaker attempts to make a pause where the meaning of the sentence envisages interruption so as to take the traveller to the next idea. From the understanding of options facing the traveler, the speaker proceeds to the description of the choice process.

Robert Frost’s poem “The Road Not Taken” describes the process of choice that affects an individual’s course of life for a lifetime. By portraying the road in the woods forking in two, Frost draws a distinct parallel to the choices one makes in life. In a musical and romantic poem, Frost depicts how a speaker takes the road ignored everybody else, instead choosing to pursue the less travelled path. His efforts are rewarded although he never gets to the initial point and forever forfeits the other road that also seemed attractive. Yet such irrevocable choices are part of everyday life. The author skilfully brings this message across with the help of various technical devices, effectively woven into the network of the story. 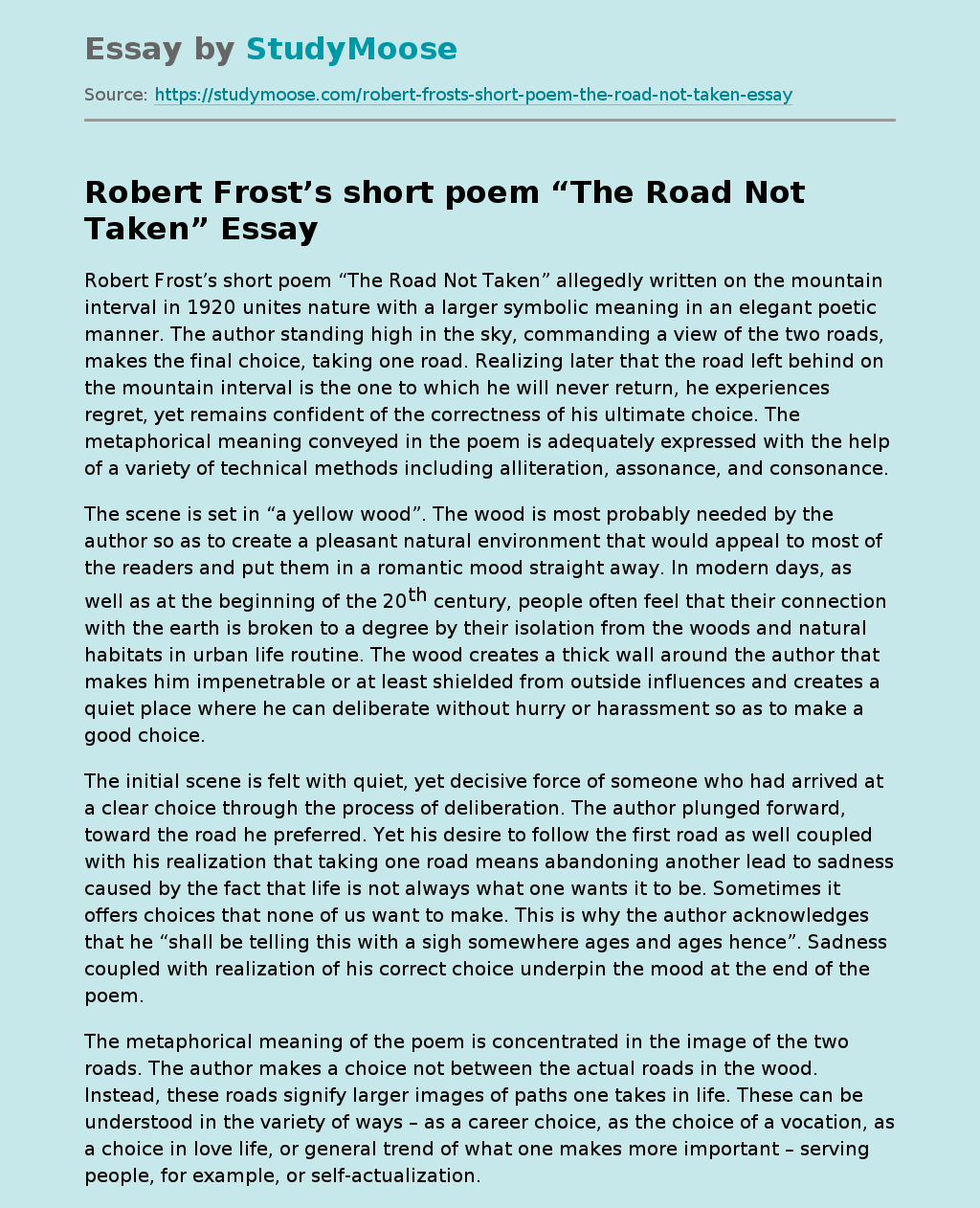