Individual's Choice in The Road Not Taken

One of the most renowned American poets of his century, and of our generation still, Robert Frost – evident in his perhaps most widely recognized poem, “The Road Not Taken” (1915) – is able to effectively relate the inherent and quintessential condundrum existent in humanity which plagues the greater part of every human being’s existence. Conversely, the poet Blanche Farley, in a similar poem entitled “The Lover Not Taken” (1984) is able to afford readers more than a brief glimpse, and perhaps, reflection, of the inner workings of the human psyche, and its complexities; however much verging on a lampoon or parody of Frost’s work it may appear to be.

Don't use plagiarized sources. Get your custom essay on
“ Individual’s Choice in The Road Not Taken ”
Get custom paper
NEW! smart matching with writer

Both writers are able to convey an aspect of humanity through their poetry. Apart from the glaring similarity which exists in the title of Frost and Farley’s poem, “The Road… ” and “The Lover… ” share another familiar element.

Both are fraught with the inherent human agony and reality of choice. The need to choose between two roads to tread by, or lovers to take for one’s own; and the possibility of being at an advantage or disadvantage for choosing or dismissing a lover or proverbial road over the other is explicitly voiced in both poems.

Both Frost and Farley are able to communicate the exquisite agony which is necessarily attached to the act of choosing, and perhaps even mourning the fact that one doesn’t have the capacity to venture and experience both undertaking.

Frost’s “The Road Not Taken” begins with the famous lines affirming the previously mentioned sentiment when he pronounces, “Two roads diverged in a yellow wood, / And sorry I could not travel both… ” (1-2).

In case readers were unable to exact this particular ideology from the title yet, the aforementioned quoted lines are able to firmly establish and affirm it. The extent of Robert Frost’s poem proceeds to relate how he chose one road over the other, one that appeared less than pleasant, but that which he proceeded to tread along in nonetheless.

And despite already treading along in it, Frost briefly thought of returning and walking the other road instead, but he resolves to continue on the road he’s chosen, pronouncing, “Yet knowing how way leads to way, / I doubted if I should ever come back. ” (14-15). The poem aptly culminates under a tiresome, but hopeful and optimistic note in which the poet looks back on the journey he’s taken, and relates: “I shall be telling this with a sigh / Somewhere ages and ages hence: / Two roads diverged in a wood, and I– / I took the ones less traveled by, / And that has made all the difference.” (16-20). The proverbial road and journey which the poet took, and which every man and woman, at one point or another, is inevitably bound to undertake is highlighted in the poem. Frost stresses the weight or impact that every individual’s choice contributes in the shaping of his or her life. The concluding line in the poem speaks to readers on a visceral level because it encompasses an inherent and significant aspect of every individual’s humanity.

In “The Lover Not Taken,” Blanche Farley addresses this similar aspect of humanity – the perennial agony associated with choice – albeit rooted in parody, and perhaps even comedy. Farley relates the age-old torment of being torn between lovers, playfully relating, at times subtly, and sometimes crudely, in a fashion almost identical to Frost’s previous poem, “Committed to one, she wanted both / And, mulling it over, long she stood… This new guy, smooth as a yellow wood / Really turned her on. ” (1-2, 5-6)

Farley proceeds to relate what she finds attractive in both men, almost in a manner which appears achingly juvenile, but the poet redeems herself with traces of wit and humor which “The Lover Not Taken” is not without. The narrator troubles herself with a view of the consequences and ramifications that could possibly ensue if she was to pick one lover over the other; but like Frost, the narrator is able to arrive at a firm decision. Farley concludes the protagonist’s particular condundrum in comedic triumphance by expressing, “With that in mind, she took the fast way home, / The road by the pond, and phone the blond.” (21-22)

Blanche Farley’s “The Lover Not Taken” may be different compared to Robert Frost’s classic “The Road Not Taken” in terms of the gravity of choices being discussed, but it nonetheless presents readers a reality which applies in the extent of human existence. It affirms the idea that the perennial agony which exists alongside mankind’s inherent need to choose is very much present, be it in something as arcane and immensely significant as the journey every individual is supposed to undertake which will alter their entire being, to something as seemingly banal, trite and even juvenile as ambivalent love. Ultimately,“The Road Not Taken” and “The Lover Not Taken, are both able to evoke the agony which lies in choices, however disparate the weight of the concerns addressed in each poem may be, and in essence, both are able to reflect humanity.

Individual's Choice in The Road Not Taken. (2016, Dec 07). Retrieved from https://studymoose.com/individuals-choice-in-the-road-not-taken-essay 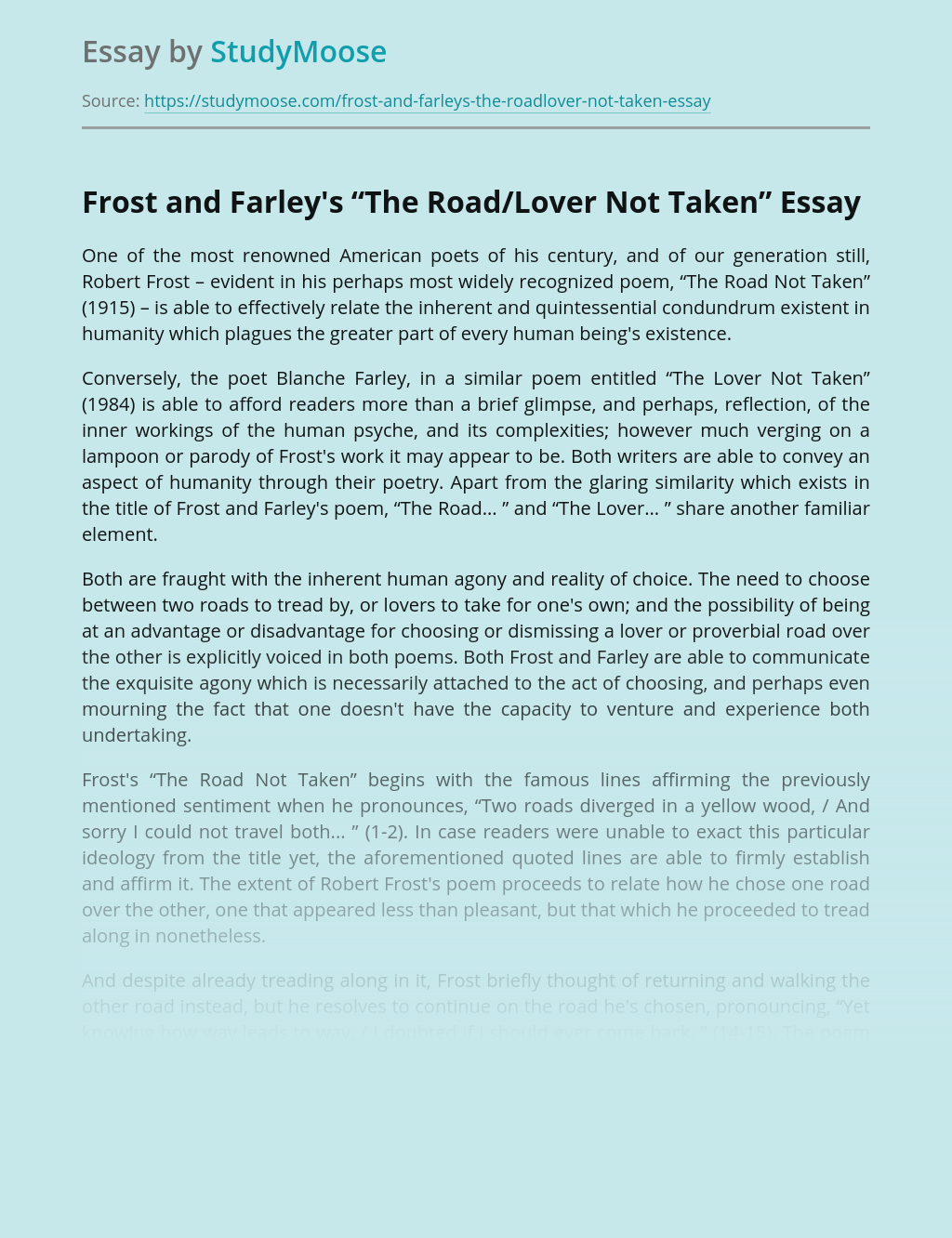