Analysis of the Road Not Taken by Robert Frost

The Road Not Taken by Robert Frost shows the narrator coming to a fork in the wood, which offers two paths to take. By use of symbolism and various verb tenses in different stanzas the author was able to convey the overall meaning of the poem. The narrator scrutinized the road but does not find a noticeable difference in the two paths and thus was stuck deciding whether which road is the better decision. However, in the fourth stanza, by the allegory “I took the one less traveled by” shows that the narrator wishes to take the path which leads to individualism.

Don't use plagiarized sources. Get your custom essay on
“ Analysis of the Road Not Taken by Robert Frost ”
Get custom paper
NEW! smart matching with writer

The narrator portrayed that in life there are decisions we must make that must be based on our own agenda. Symbols also play in defining the meaning of the poem. The symbol of the color yellow is use to show more than just the narrator’s cowardice, but also yellow represents autumn meaning the author is at the end of his life which indicates that he has wasted his whole life in indecision.

Proficient in: The Road Not Taken

Other symbols such as “two roads” and “one traveler” in the first stanza show the idea of free choice and individualism of the narrator.

We can also tie in to the fact that because the roads lies in the woods, and that roads represents free choice, the overall idea would be comparable to free choice and fate. You are free to choose what choice to make but in the end the choices you make are still a part of your fate.

The first three stanzas of the poem being in past tense hints that he is looking back at his past, but the fourth stanza shows us the narrator is hoping “somewhere ages and ages hence” the decision he made will benefit him. In addition, because the narrator is still uncertain if the choice he made was the better of the two, we can concludes that he is still reflective on whether which road he should have took, hence the title “The Road Not Taken. ” Partially, the poem tells us about the narrator’s fear of regrets which eventually leads to his indecisiveness in choice of what road to travel.

The fear of making mistakes from either choice had excluded the narrator from taking any action. . Frost’s point is to acknowledge the fact that in life there are choices where uncertainty makes choosing difficult, and often we are paralyzed by the fact of making the “wrong choice. ” Words such as “sorry,” “sigh,” and “doubted” shows the authors regrets and concern for making the wrong choice. The last stanza offered the author’s apprehension furthermore of whether which road he should take with the stuttered “I.

” Although in the last two lines the narrator says he takes “the [road] less traveled by, and that has made all the difference,” the use of the word difference is ironic to what the poem has states in retrospective about the similarity of the roads. In the poem The Road Not Taken the narrator’s idea of non-conformity coupled with the fear of regrets from making the wrong choice apprehended him from making any decisions. The Road Not Taken shows us that the choices we make in life should be based on our individual values.

Analysis of the Road Not Taken by Robert Frost. (2016, Nov 26). Retrieved from http://studymoose.com/analysis-of-the-road-not-taken-by-robert-frost-essay 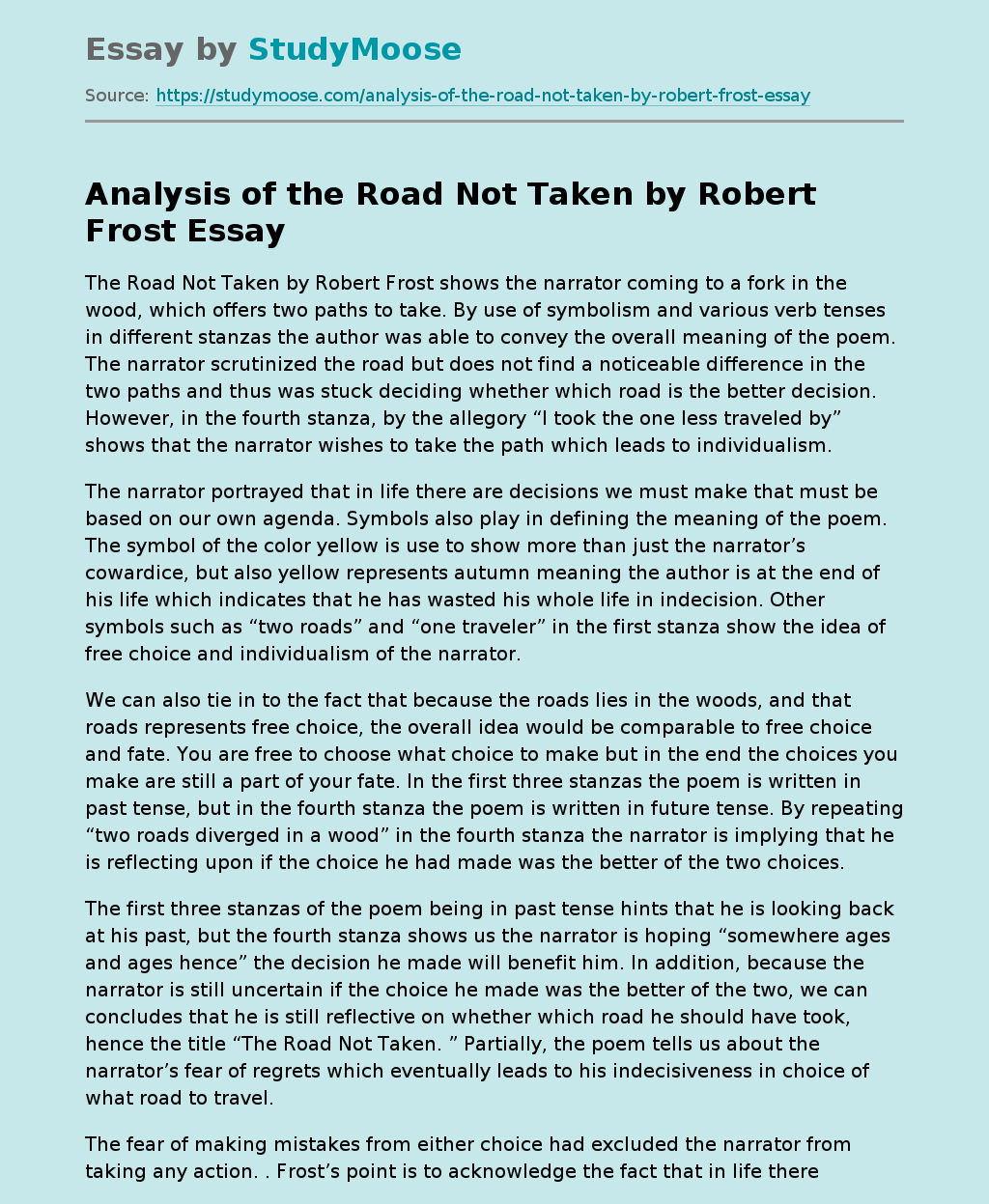