In their respective fields, both Walt Whitman and Ralph Waldo Emerson were considered to be quintessential American writers. Their thoughts and statements regarding nonconformity and individuality were revolutionizing for the era that they lived. Thanks to them,similar thoughts and statements, are now much more mainstream and unexceptional. Although they used different tactics to get their points across, their shared opinions become evident.

Both Walt Whitman and Ralph Waldo Emerson believed strongly in originality and personal expression;although the different tactics that they used to get their message across were nothing short of contrasting.

Turn in your highest-quality paper
Get a qualified writer to help you with
“ Transcendentalism of Ralph Waldo Emerson vs Walt Whitman ”
Get high-quality paper
NEW! AI matching with writer

In Emerson’s case, he was vehemently opposed to a society that he saw to be oppressive and unimaginative. Emerson was convinced that all of modern human civilization was in collaboration to crush his uniqueness and subjugate him to a life of a faceless cog. “Society is in conspiracy against the manhood of everyone of its members.”

Conversely, Whitman regarded the common man with much esteem and favoritism.

In his epic poem, “Song of Myself” Whitman spoke of the working class with an unusual favoring and support of their ways and lifestyle. “The sun falls on the crisply hair and mustache, falls on the black of his polished and perfect limbs, and I behold the picturesque giant and love him.” Whitman encouraged the reader to lead an original and unconfirmed life. He celebrated the common man and tells the reader to be happy with their life and social stature.

These ideals might seem as if completely different, but the points that they try to get across, are exactly the same.

They are both stating that one should turn its back on the complex structure that is society and rather live a simple (although by no means primitive or unoriginal) life, unconstrained by conforming and strict social customs or procedures.

The tones of Emerson’s poem’s and Whitman’s essay, were quite contrasting. Emerson’s essay seemed almost cold and apocalyptic contrasted to Whitman’s comparatively beautiful and uplifting poem. In Self Reliance, Emerson speaks of society with disgust and suspicion. He sees it all as a cruel masquerade that binds hapless souls to its iron will. “Society never advances. It recedes as fast on one side as it gains on another.” In “Song of Myself”, Whitman speaks in flourishes and silky verse’s. “You sea! I resign myself to you also – I guess what you mean, I behold from the beach your crooked fingers.”

Emerson’s essay was very philosophical and open to personal interpretation (“A foolish consistency is the hobgoblin of little minds”), while Whitman’s poem was more detailed and vividly sensual (“The beards of the young men glisten’d with wet, it ran from their long hair”). Also notable, is the fact that Whitman spoke to the reader about what he perceives and his personal opinions. (“I guess it must be the flag of my disposition.”),while Emerson spoke more about facts that he knew to be true, leaving it up the reader to agree or not. “Another sort of false prayers are our regrets.”

From this, it is obvious to see that their writing styles and personal tactics differed greatly when it came to persuading someone of a particular cause.Emerson and Whitman both strived for more originality in society. Whitman was dedicated to creating an authentic American conciseness through his writing, one that was not made up of cast off European procedures. Emerson was committed to freeing the minds and let loose the originality, which he saw society holding back. “Society is a joint stock company, in which the members agree, for the better securing of his bread to each shareholder, to surrender the liberty and culture of the eater.

It is evident to see that both Walt Whitman and Ralph Waldo Emersonstrongly felt the need to free, warn, or otherwise inform society of their findings and opinions. Thanks to this sense of obligation and perspective liberty, we all now get to enjoy many other informative do-gooders like them, eager to advise and enlighten us in all aspects of life. Ironically, in their attempts to free us of the torture that is society, they have unleashed a quintessential component that makes their fear and opposition to this civilization too accurate indeed.That would be telemarketing. 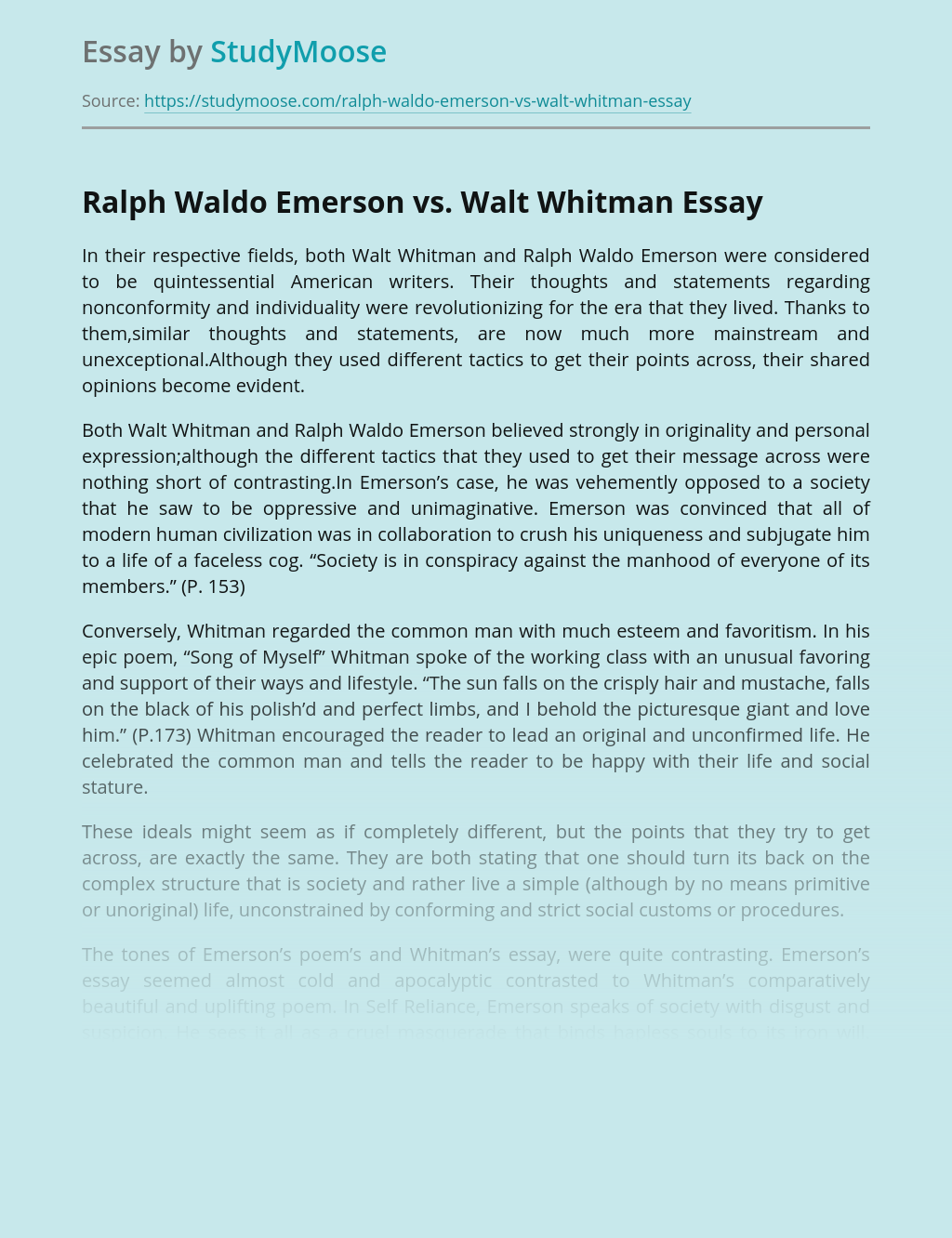 Turn in your highest-quality paper
Get a qualified writer to help you with
“ Transcendentalism of Ralph Waldo Emerson vs Walt Whitman ”
Get high-quality paper
Helping students since 2015
Stay Safe, Stay Original