Perhaps the two greatest rebels in the history of modern art were Andy Warhol and Jackson Pollock. To a great extent, they knocked what was considered traditional art for a veritable loop with their new and unique approach to what was considered “good arts.” Granted, neither artist was the first to rock the traditional method of presenting “Gods and Kings” as the centerpiece of the artist’s canvas.

Dadaism, Impressionism and a host of other styles of art had been slowly, but surely chipping away at the traditional mores of art for many decades.

Don't use plagiarized sources. Get your custom essay on
“ Andy Warhol and Jackson Pollock ”
Get custom paper
NEW! smart matching with writer

But, it was Pollock with abstract expressionism and, to a greater degree, Warhol with pop art that truly blew away many of the common conventional themes of the art world and attracting widespread public attention as mega star artists.

Now, some of the more trite critics will look at Pollock’s abstractions and Warhol’s elevation of the mundane as something “Anyone can do” or, worse, “I can do that”, but as previously stated such criticism is ridiculously trite and based on a surface value (or non-existent) understanding of the work and legacy of these masters.

For Pollock and Jackson, art was far more than simply putting paint to canvas.

Yes, their work was visually appealing (again, Warhol’s work was more appealing, however, on a national level), but this appeal was not limited to merely how good the painting looked. No, there was a unique psychology that captured the pulse of public sentiment that drove the popularity of these paintings.

In other words, the paintings touched a raw nerve in their audience because the artist’s had a unique ability to firmly place their finger on the cultural pulse of a society and it was this that made them so popular.

Of course, in order to understand how they were able to place their finger on the pulse of a nation it is also critical to understand what was motivating them, how they achieved their psychological response in their audience, why the audience was so open to receiving such a psychological response, and what was the dominant cultural themes in society at the time that made their work so wildly popular. Much of this will be examined in this essay and from this a clearer understanding of the work and influence of Pollock and Warhol will b derived.

Regarding the ways the careers of Pollock and Warhol went against the standard perceptions of Abstract Expressionism and Pop Art, it would be safe to say that neither Pollock nor Warhol was looking to impress an audience of art critics or maintain their popularity in certain social circles as much as they were looking to take their work directly to an audience and knock the art world for a loop.

In other words, they did not seek to be members of an established club of conventional wisdom or taste as much as they were looking to completely re-establish the means and methods of how art was perceived and what goals art functioned. In Pollock’s case, abstract expressionism was designed more as an understanding of the chaotic nature of the human psyche. For Warhol, pop art was an understanding of the consumer and entertainment driven culture and both rejected the elitism that was so very common in art critic and fan circles.

Regarding consumer culture, the work of Warhol is much easier to decipher on the surface than Pollock’s work. As the legend goes, when Warhol was asked to paint the things that mattered most to him he painted Campbell Soup cans because he ate Campbell’s soup every day. Later, this would expand into the painting of a variety of celebrities and pop cultural icons that were at the heart of commercial entertainment consumerism. To a great degree, Warhol was savagely mocking the former notion that the subject of the artist’s brush need to be gods and kings from antiquity. Instead, Warhol pointed out that modern gods and kings come from the world of entertainment and that they are rooted in commercialism.

For Pollock, the connection is more subtle although his bizarre painting style would assume to be anything but. On Pollock’s canvas, there is present the images of chaos and a decided lack of clarity. (Hence, the painting were abstract) As such, there is not so much a direct attack or presentation of consumerism in a positive or negative light as much as it is an “attack” on the psyche of the individual who has become a walking ball of confusion thanks to media inspired messages of consumerism. In other words, you can not separate the parts from the whole and in the case of Pollock you can not separate the confused mind from the random images that perpetually bombard it.

Regarding the relationship between disaster and mass culture, it would seem that Warhol did not really have such an alarmist view of pop culture. In fact, he was more celebratory and embracing of it. Yes, there can be a cynical notion put forth that Warhol may have felt that people were belittling themselves and not living up to their full potential by being overly reliant on a love of consumerism and popular entertainment and this, of course, can lead to a weakening of the mid; but, overall, Warhol did not seem to paint his images as a cautionary tale although it is understandable that some may feel it this way. After all, if a person felt that popular culture and entertainment were the central focus of a declining culture then Warhol’s painting would be representative of alarm bells going off.

Regarding how contemporary politics affected the careers of both artists this is somewhat of a difficult question to answer because neither Warhol nor Pollock were known for being expository in terms of the means and methods in which they developed their art. Of course, Warhol had produced paintings of John F. Kennedy, but such painting was far more focused on lauding the celebrity nature of Kennedy’s depiction as opposed to an endorsement of his politics. Pollock was seemingly a humanist in his psychological approach to invoking emotion and did not seem to endorse any politic motivations. Whether or not this made them popular with the public is a somewhat moot point because the public was more interested in the “hipness” of their work as opposed to any sincere attempt to decipher meaning.

In terms of criticizing pop culture the answer would be Pollock by default as Warhol celebrated consumerism. Pollock’s material was far more cerebral and this would seemingly go hand in hand with a rejection of trite consumerism although such an ideology was probably not Pollock’s governing motivation. Again, it is hard to prescribe motives to visionaries mainly because it is difficult to understand where there are coming from since they are the origination point of and ideology and not a tool of it. As such, understanding them takes on a unique level of difficulty. 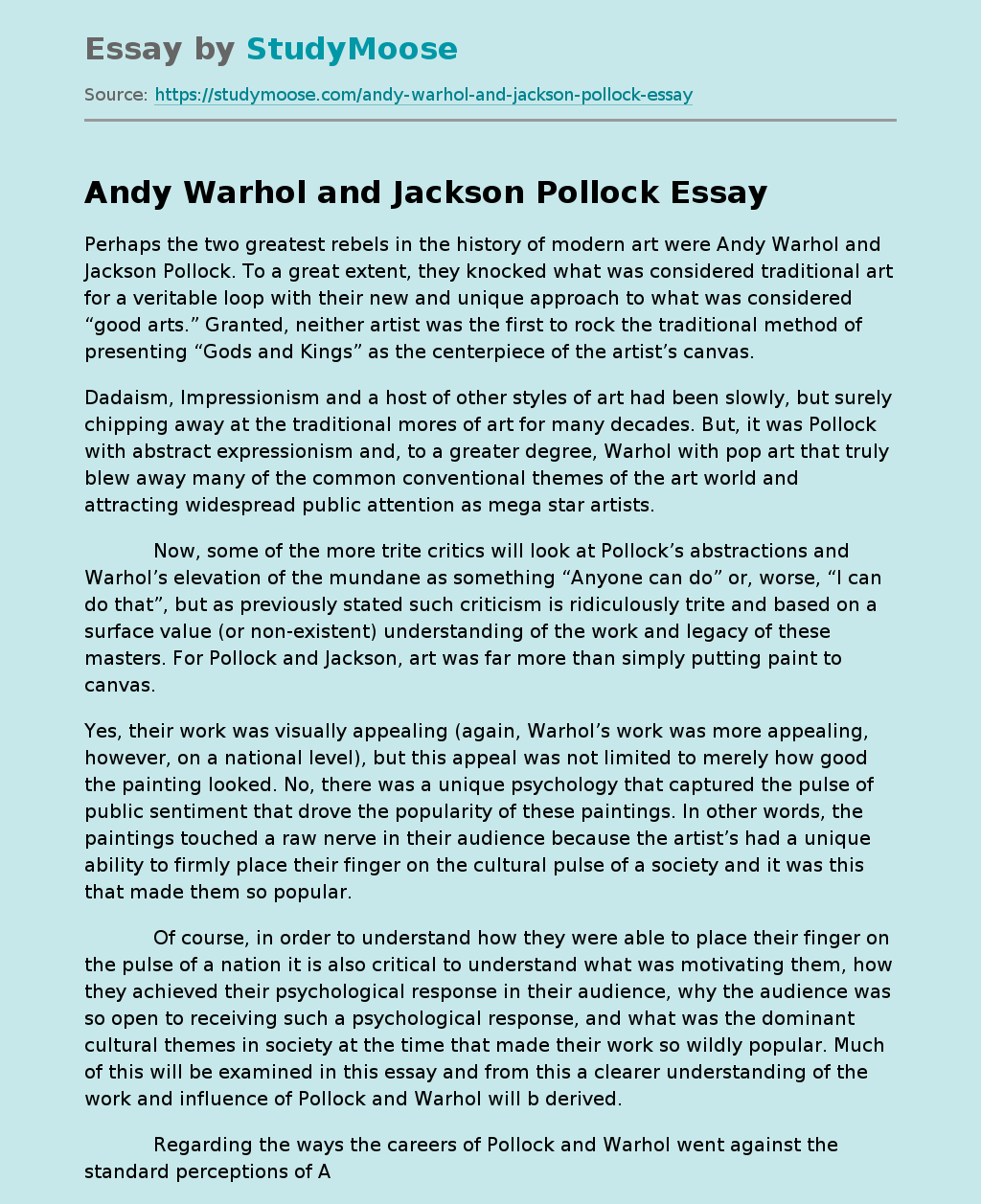