Art is a captivating medium. A painting can speak volumes on the current culture of the society it was created in. It’s not common to see a political cartoon in your local newspaper, making fun of the current political landscape and the opinion of the people. There was an artist who didn’t exactly create a wacky cartoon about politics but rather took an abstract approach to satirize the culture of the United States. That artist is Andy Warhol, who revolutionized the pop art movement and changed America’s culture for years to come.

Don't use plagiarized sources. Get your custom essay on
“ Andy Warhol’s Art ”
Get custom paper
NEW! smart matching with writer

The first real attention he received in the social space was from his “Factory”, the studio that he and his assistants worked within to create his pop art. In the words of Rob Horning in “BROKEN SOCIAL SCENE”, The Factory “[was] generating work with a kind of automated relentlessness” (Horning 84-89). His project became draining in no time; he would consistently parody the current culture and events that would unfold.

This must have not phased him that much, as he would go on to do this for longer. The more Warhol would print his silk-screen works of art, the more America itself would feel like nothing but just a big joke. The country always had its fair share of artists that would poke fun at the situations and cultural movements that it would get itself into. What makes Warhol different from the rest, however, was that these past artists had a sense of respect and held some things to a sacred level, whereas Warhol saw the inherent unimportance of what society held dear.

Nothing was exempt from his satirical work. That’s what jump started the rise of fame for Warhol in America.

Warhol observed a kind of condition that was plaguing society, a condition that spoke volumes about the gullibleness of the current culture. It’s the people’s willingness to fall for advertisements created by corporations that just want as much profit as possible, even if that means using whatever they can to get the consumer watching. Warhol saw what was happening and decided to create art that would get the viewer to understand what he was seeing happen. The Factory got to work creating the famous Campbell’s Soup Cans, created in 1962. The real inspiration for the piece was from his friend, Muriel Latow, that said: “Something you see every day and something that everybody would recognize. Something like a can of Campbell’s Soup.” Warhol responded by exclaiming, “Oh that sounds fabulous.” (Scherman and Dalton 87) They weren’t aware for the sheer amount of criticism and praise this piece would have received by the time they had been long done. 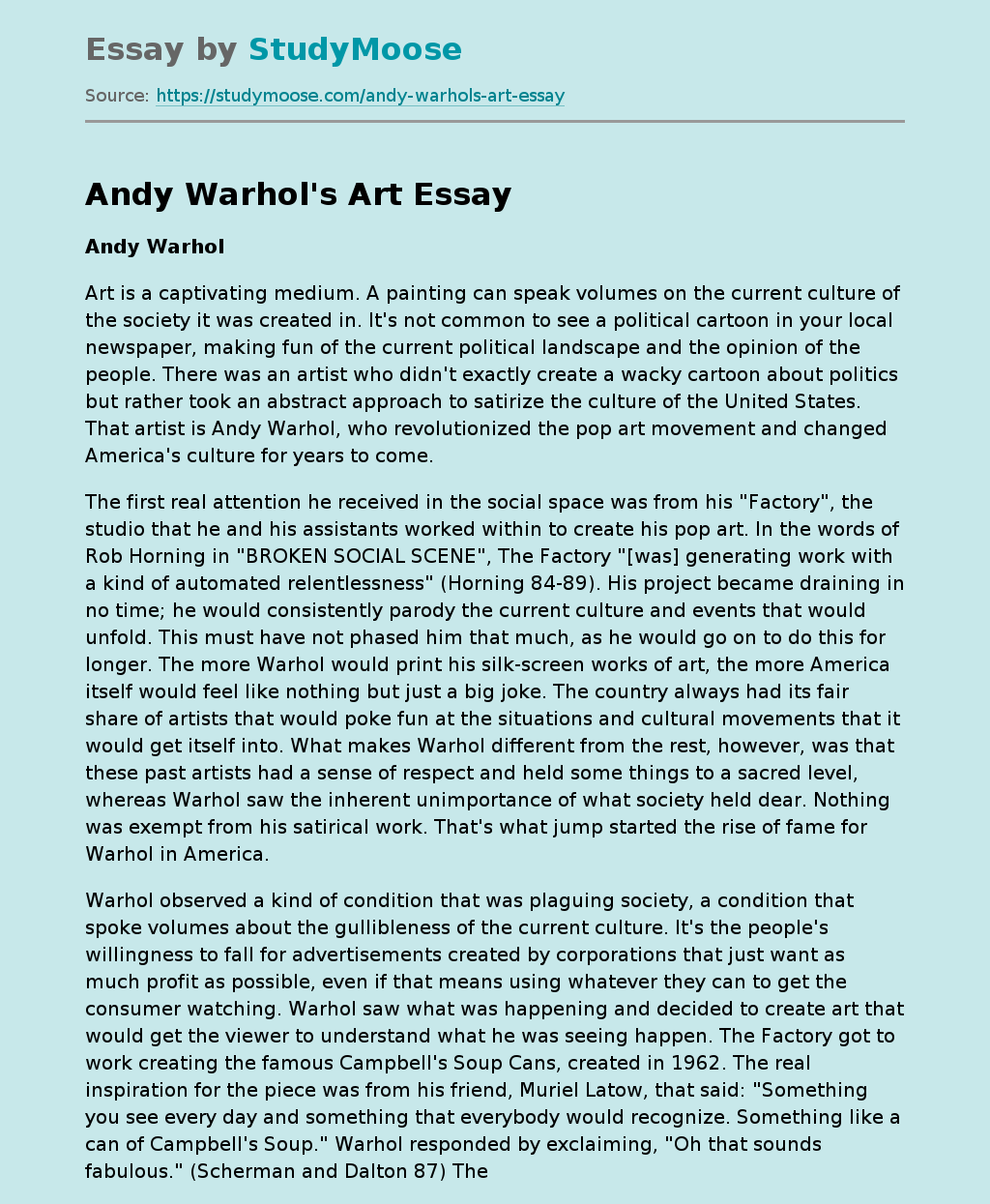