The technical revolution in architecture known as “Gothic” began at the end of the 12th century and lasted just over two hundred years. The advances made in architecture paralleled those in intellectual life. Gothic architecture was generally tall and inspiring and was a significant structural improvement upon the Romanesque buildings that preceded it.

Even though the Gothic era roughly lasted two hundred years (12th-14th century), it was long enough to voyage deep into the beautiful and complex world of architecture.

These contributions revolutionized the building habits of the time, as well as, have a profound influence on the social, religious and political culture throughout the European world. This essay will provide a brief history of the Gothic Era and detail the essential elements of Gothic style. Also, insight will be provided on the influence Gothic Style had on the people and culture during the Middle Ages and how it has transcended to Modern times.

Gothic architecture made its debut in the cathedrals of France during the 12th century.

The historical style itself originated at the abbey church of St. Denis in Saint-Denis, near Paris, where it exemplified the vision of Abbot Suger. The first truly Gothic construction was the choir of the church, known as the Abbey of St. Denis, consecrated in 1144.

The architectural structure of the Abbey of St. Denis differed from previous churches in many ways.

Most churches had wooden rafters, which were replaced with stone vaults, but Abbott Suger decided to replace the stone vaults with pointed arches and complex ribbed vaults. The pointed arches allowed for the stretching of the walls to an extreme height which later became a fundamental element to the ribbed groin vault.

The scholar H. W. Janson (1974) describes the Abbey of St. Denis this way, “…the entire plan is held together by a new kind of geometric order: it consists of seven identical wedge-shaped units fanning out from the center of the apse. This double ambulatory is a continuous space, whose space is outlined by a network of slender arches, ribs, and columns that sustains the vaults.” (pg 67)

With these structural systems in place, the area was seemingly weightless and open compared to the solid rigidity of the Romanesque churches. This complex plan had given way to large stained glass windows that can now expose the inner chambers to a luminosity that was not available before these advances in architecture.

This new style of architecture, stemmed from Abbot Suger’s vision, essentially began the spread of Gothic style throughout Europe, which was first was adopted in northern France and by the English, and then further spread throughout France, the Low Countries and parts of Germany and also to Spain and northern Italy by end of the 14th Century. This medieval style emphasized two main characteristics: verticality and light.

The Gothic architects used height and light to obtain a feeling of aspiration toward God and heaven. They did this through the use of an ingenious structural system which was mainly composed of the following structural components: pointed arches, arched vaults and flying buttresses.

In order to achieve the extreme heights, the weight of the building was placed on outside supports called buttresses. Since the walls were freed from bearing the weight of the ceiling, they could be designed with large openings. Artists filled these openings with stained glass–tiny pieces of colored glass fit together to form images which told the stories of Jesus and the saints of His Church.

When the sun shines through these stained glass windows, the light is transformed into multi-colored patterns on the floor. The architects of the Gothic cathedrals were trying to create an other-worldly feeling, the beauty of heaven. They were successful.

As the tendency was to dramatize height in Gothic architecture, the walls typically appear as tall, thin columns set between the windows. Again, this is a result of the Gothic structural system employed. Whereas most other types of church buildings are covered by trusses, wooden roofs or stone barrel vaults, which do not permit large openings as can be found in Gothic architecture, the Gothic cathedrals are covered by a unique set of masonry vaults. These vaults are formed by the intersection of two half-cylinders which allows arches to appear on all four sides.

The floorplan of the Gothic cathedral resembles the shape of a cross. The horizontal arm of the cross is called a transept. It extends out from the main body of the church, called the nave. This Gothic floorplan is a reminder of Jesus’ passion and death.

The Gothic goal of creating a single, open, high, lighted interior space was achieved by the use of flying buttresses. The barrel-vaulted ceilings were buttressed (held in place) by means of these wall-like pillars set outside of the church. They act like slender, gigantic fingers. Flying buttresses have a straight upper surface and a curved lower surface. Heavy pinnacles were added on top of the outer pillars which were needed to weight down the buttress properly.

The men who designed the flying buttress were artists guided by geometrical concepts of proportion yet one of the basic methods they used to acquire knowledge was the process of trial-and-error. They kept at it until they perfected their building techniques. The development of the Gothic structural system with its flying buttresses is one of the greatest achievements in architecture. It is no coincidence that it was devised by men of great faith who wished to give honor and glory to God through their arts and crafts.

After the 14th century, people began a more approachable aspect to architecture. The idea of detail, rather than height, was the focus. This concluded the Gothic era, but the aftermath of this period resounded in many of the cathedrals that still stand today as a ‘living’ testament to an era passed. Before the Gothic architecture, rarely was there a period of time where religious and patriotic zeal was seen with the same amount of effort as put into the Gothic cathedrals. This was the legacy and influence that the Gothic Style had on the people and culture during the Middle Ages.

Influence on the People and Culture of the Middle Ages

The essential character of the Gothic period, particularly at the outset, was the predominance of architecture; all the other arts were determined by it. The character of the Gothic visual aesthetic was one of immense vitality; it was spikily linear and restlessly active. Informed by the scholasticism and mysticism of the Middle Ages, it reflected the exalted religious intensity, the pathos, and the self-intoxication with logical formalism that was the essence of the medieval.

The cathedral was a church building whose purpose was the service of God. Pride as well as spirituality inspired cathedral builders. Guilds that contributed their services were often memorialized in stained glass windows and special chapels. As with almost any large undertaking of the time, there were political implications for the people involved in the operation of the building cathedral. The types of cathedrals built at a given time were thus representatives of the political, social and economic situation there at the time of construction.

The Gothic church resided in the center, often elevated part of the town or city. The position of the church symbolized the dominance of the church over human affairs, not only spiritual but secular as well. “Gothic cathedrals used refined, upward-striving lines to symbolize humanity’s upward striving to escape the bounds of earth and enter the mystery of space” (Creative Impulse).

The dissemination of the style from its birth place in Ile-de-France was not unlike the exportation of an industrial technique. And in the 13th century, such exportation easily reached the far corners of the western world along the roots of commerce. Robert Banner states, that architecture is more than simply a technique. “It has a permanence of its own and it conditions the mind as well as the footsteps of the people who make use of it. Gothic was not dark, massive, and contained, like the older Romanesque style, but light open and aerial in its appearance in all parts of Europe and had enduring effect on the outlook of architectural styles in succeeding generations, commonly called the Gothic Revival.

Gothic Revival in the Modern Ages

Gothic revival is a term designating a return to the building styles of the Middle Ages. Although the Gothic revival was practiced throughout Europe, it attained its greatest importance in the United States and England. The Columbia Encyclopedia (2003) describes that the early works were designed in a fanciful late rococo manner, exemplified by Horace Walpole’s remodeled “gothick” house, “Strawberry Hill” in 1770. By 1830, however, architects turned to more archaeological methods. Thus, just as the classical revivalists had done, they began to copy the original examples more literally.

A. W. N. Pugin wrote two of the basic texts of the Gothic Revival. In “Contrasts,” written in 1836, Pugin put forth the idea that the Middle Ages, in its way of life and art, was superior to his own time and ought to be imitated. He amplified his ideas in is writing of “The True Principles of Pointed or Christian Architecture,” in 1841. He propounded that not only must Gothic detail be authentic but that the contemporary architect should achieve the structural clarity and high level of craftsmanship that were found in the Middle Ages by using the methods of medieval builders.

The first works of note in the Gothic Revival style appeared in the 1830s in buildings designed by A. J. Davis and Richard Upjohn. The archetypal castle Lyndhurst (originally called Knoll) in Tarrytown, New York, was designed by Davis in 1838 and doubled in size, also under Davis, in 1865. The private houses in Bangor, Maine were the first commissions of Richard Upjohn in 1833 through 1836. He soon executed several gothic revival structures starting with St. John’s Church in Bangor (1836-39), and then continued with several smaller commissions when in 1839 he was engaged to rebuild Trinity Church in New York City.

In the 1840’s, a young man by the name of James Renwick made significant contributions to the Gothic Revival. He became especially renowned for his Grace Church and St. Patrick’s Cathedral in New York City, both prime examples of the Gothic revival in the United States.

The Gothic movement floundered because of the impossibility of reproducing medieval buildings when there was no longer a medieval economy or technology. Only superficial effects of the style lingered in some eclectic works of the 19th and 20th cent. However, the ideals of earlier theoreticians, the clear expression of structure and materials have influenced modern architecture.

As detailed in the essay, Gothic architecture made contributions to the architectural world that revolutionized the building habits of the time as well influenced the social, religious and political culture throughout Western Europe. The aftermath of this period is resounded in many of the cathedrals that still stand today as a ‘living’ testament to an era passed. Before the Gothic architecture of France, rarely anywhere else was religious and patriotic zeal seen with the same amount of effort as put into the Gothic cathedrals. That was Abbot Suger’s goal, which was continuously accomplished with the building, and rebuilding, of every Gothic cathedral. Truly, Gothic architecture not only influenced the people of an earlier time but still continues to influence people today. 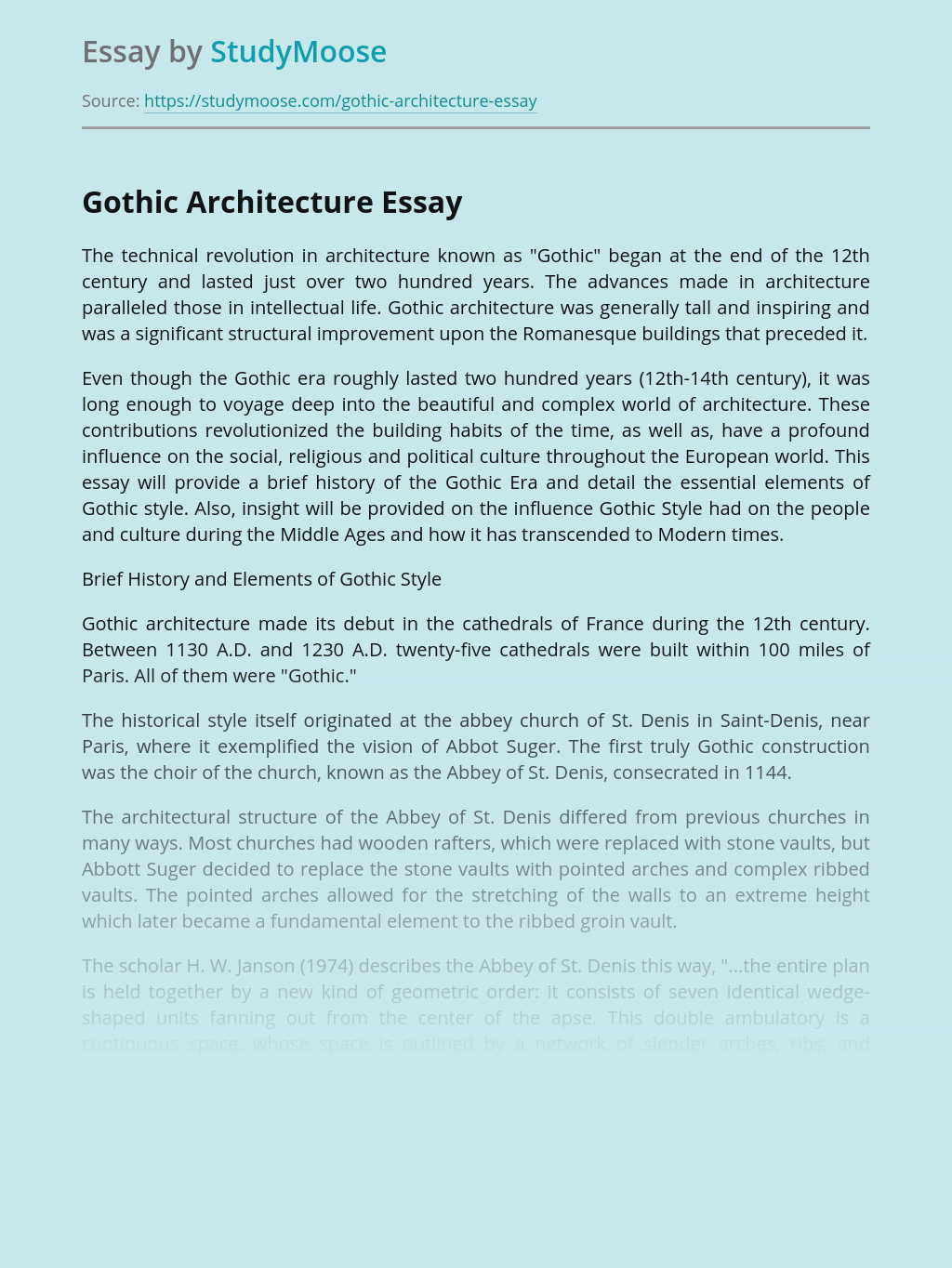