In this story, almost every detail seems to stand for something else. These ironic details foreshadow Fortunado’s horrible death.

Poe’s uses irony and foreshadowing to develop suspense and mood throughout this story. The first example of irony in this story lies in the character’s name. The name Forunato is ironic because it sounds like the word fortunate. Also Fortunato translates to “fortunate one” in Italian and suggests good luck. As we know from the beginning of the story, Fortunato is not so fortunate and his future lies in the hands of Montresor.

Other ironies abound in the setting of the “Cask of the Amontillado. ” This story takes place in Italy during Carnival, which is a joyous and happy time full of family, friends, and food.

Carnival is the last place one would think of committing a murder. This ironic setting is one of the reasons Montresor is so successful and is why Fortunato is so surprised. A more visual and humorous irony lies in Fortunato’s apparel.

“The man wore motley. He had on a tight-fitting parti-striped dress, and his head was surmounted by the conical cap and bells” (Poe “Cask”). His festive outfit contrasts with the impending doom that awaits him. Also, it is ironic that Fortunato believes that he is intelligent on the subject of wines, but he is dressed as a fool.

In addition to irony, forshadowing is evident in the opening paragraph of the “Cask of the Amontillado”. Montresor’s first words to the reader are: The thousand injuries of Fortunato I had borne as I best could, but when he ventured upon insult I vowed revenge. You, who so well know the nature of my soul, will not suppose, however, that gave utterance to a threat. At length I would be avenged; this was a point definitely, settled –but the very definitiveness with which it was resolved precluded the idea of risk. I must not only punish but punish with impunity (Poe “Cask”).

Clearly, Montresor has serious intentions for Fortunato, and these comments foreshadow Montresor’s vengeance on Forunato at the end of the story. Montresor says he must not only punish but punish with impunity. This foreshadows how an insult drove Montresor to take justice into his own hands and implies that Forunato’s punishment was deserved. Later in the story we see how this justice is really just an excuse for murder. Another instance of foreshadowing is when Montresor and Fortunato are in the vaults, looking for the cask of Amontillado. Fortunato begins to cough and says, “Enough, the cough’s a mere nothing; it will not kill me.

I shall not die of a cough” (Poe “Cask”). This foreshadows his death because Fortunato was right in that he would not die of a cough but that he would die of something much more sinister. The clueless Fortunato also mentions that he has forgotten what Montresor’s family coat of arms looks like. Montresor describes his coat of arms as “A huge human foot d’or, in a field azure; the foot crushes a serpent rampant whose fangs are imbedded in the heel” (Poe “Cask”). This symbolically foreshadows Fortunato’s death because Montresor represents the human foot crushing the serpent, which represents Fortunato.

This coat of arms shows that Montresor was not the first in his family to take justice into his own hands, a hint that Fortunato does not pick up on. “The Fall of the House of Usher” also makes good use of irony and foreshadowing. It is one of Poe’s most well-known short stories and is considered one of his best. This story shows us how important irony and foreshadowing are to a gothic tale by providing suspense and humor to Poe’s stories. One instance of irony in “The Fall of the House of Usher” is in one of Usher’s many paintings. In this painting, Usher paints a vault for the burial of a body.

This is ironic because it portrays the tomb in which Madeline will be buried. It also shows how Lady Madeline would be buried alive. This painting signifies Usher’s dark thoughts and leads us to believe that he planned to bury Lady Madeline alive. Another example of irony is when the narrator reads Usher the story the “Mad Trist”. The narrator reads this story in order to calm both his and Usher’s nerves. This is ironic because the “Mad Trist” is a parody about a medieval romance. Poe introduces this story at the greatest moment of tension in the story; the Narrator cannot sleep, a storm rages outside, and Usher is on the brink of hysteria.

The narrator could not have picked a worse time to read this book. (Poe “Usher’). Probably the most ironic part of the story was the change that Lady Madeline experiences before she is buried and after she is buried. When the narrator first sees Madeline, before she is buried, she is lifeless and can barely move or talk. After she comes back from being buried alive however, she has much more of an impact on the people and things around her. When she comes back from the dead, she has enough strength to tackle and kill Usher. This shows us that Lady Madeline has grown since her death.

“The Fall of the House of Usher” is known for its Gothic elements. In this story Poe describes the house as bleak, gloomy, and close to crumbling down. When the narrator first sees the house at the beginning of the story he says, “I know not how it was — but, with the first glimpse of the building, a sense of insufferable gloom pervaded my spirit” (Poe 139). The gloom and bleakness of the house foreshadows the doom and horrors that will occur inside the house later on in the story. Poe lets us know from the beginning of the story that something execrable will happen inside that house.

Poe’s description of the Lady Madeline as having “affections of a partially cataleptical character” (155) predicts her early death. The word cataleptical means to be in a state in which consciousness and feeling are lost and the body assumes a death-like rigidity. Lady Madeline’s description foreshadows her death because she is described as lifeless and lost. She seems as if she was already dead. The most obvious example of foreshadowing in this story lies in the title. “The Fall of the House of Usher” foreshadows what will happen to not only the physical House of Usher, but also the symbolic House of Usher.

Symbolically, the House of Usher represents the bloodline of Ushers. When the house crumbles to the ground at the end of the story, it represents the end of the Usher bloodline. “The Cask of Amontillado” and “The Fall of the House of Usher” give a multitude of examples of both irony and foreshadowing. Poe uses these literary devices to develop suspense and mood in these stories. Without these literary devices, his stories would seem flat and boring. Poe’s literary devices are what captured and maintained my interests thought his stories. 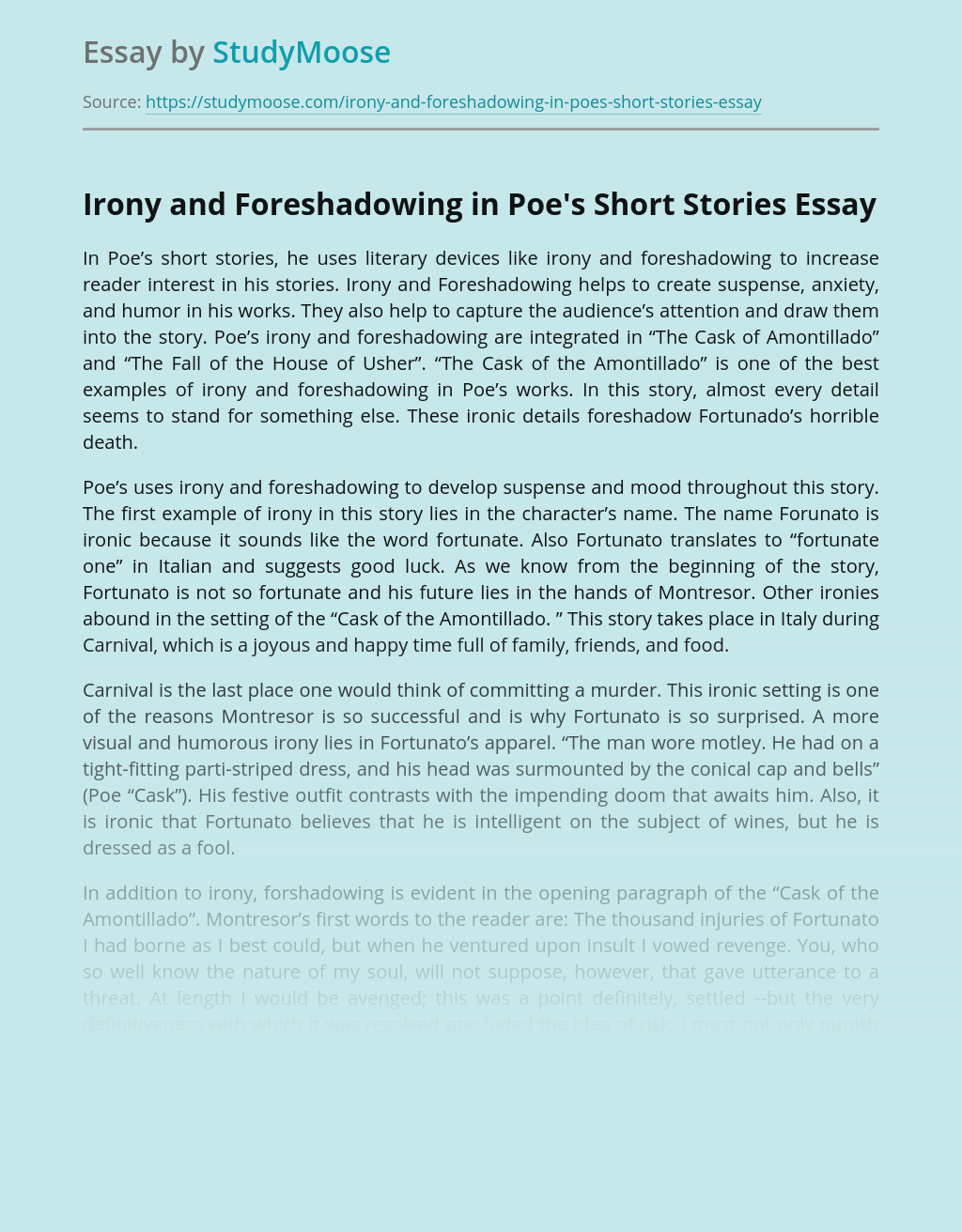 Short Story The Pit and The Pendulum

If there is one thing that has been prevalent since human interaction began, it is the concept of revenge. Everyone has a moment in their life where someone does them wrong, and they want nothing more than to get back at the person who is responsible. While this reaction is completely normal, the results of...

Edgar Allan Poe and Nathaniel Hawthorne were two of America’s finest Romantic writers. These two writers have stood the test of time and are read as much today if not more than they were in their own time. The major reason that both author’s were as popular as they are is because of the fact...

The Fall of the House of Usher Analysis

“The Fall of the House of Usher” is a short story written by Edger Allan Poe in 1839. Almost everything about the story is very gloomy, dark and depressing. For example, the house is described by the narrator as “the melancholy House of Usher” and the description of Roderick Usher himself makes you think of...

How is tension created in 'The tell tale hearts' and 'The black cat'?

In this essay I am going to study the narratives ‘the black cat’ and ‘the tell tale heart’ composed by famous writer Edgar Allen Poe and see how stress is created in the two tales. Both tales are written in a gothic horror category and Poe’s intent for this was to chill and agitate the...