The Betrayal of Anne Frank

For decades, historians around the world have been reviewing facts about the betrayal of Anne Frank. On August 4th, 1944, the Gestapo captured Anne Frank and the other residents of the ‘Secret Annex’. Months of torture were ahead of them in three different concentration camps. The camps got the best of seven out of eight people from the ‘Annex’. Otto Frank, Anne’s father, was the only survivor of the Holocaust. The betrayer of Anne Frank and her family needs to be found, they all deserve it.

Don't use plagiarized sources. Get your custom essay on
“ The Betrayal of Anne Frank ”
Get custom paper
NEW! smart matching with writer

Until now, no one has known who made the fatal phone call to the Secret Police. Anton ‘Tony’ Ahlers is the infamous betrayer of Anne Frank.

Tony Ahlers’ son said, “Your suspicions of my dad possibly betraying the Frank’s is wrong. He DID betray them.” Ahlers was also a known betrayer. Lana Hartog told one of the Frank family helpers that she knew Jews were hiding and could not just sit back and let it continue.

Although investigated after the war, she was not found guilty. This proves Lana’s innocence; therefore, she is not guilty. Ahlers is a clear suspect who hated Jews, and Otto and his family were Jews.

Ahlers was a worker for the DNP (Dutch National Party- Nazis) and had a hand in dozens of betrayals. Ahlers’ half sister, Margaret Block, says that Tony bragged about turning in the Franks; however, because everyone in their family was terrified of him and what he could do to them, they never turned him in.

If Ahlers had betrayed many other Jews and had turned them in, what would stop him from doing it again? That question leaves historians at a stop sign, at which they are paused momentarily.

Tony Ahlers was the only person in the investigation of the betrayal of the Frank family that had a motive; he desperately needed money. With his business bankrupt, he truly had nothing else to lose. Otto was of no use to him any longer in the aspect of business. Otto Frank did business with the German Army, and Ahlers found a letter stating Otto believed the Germans would lose the war. Ahlers used the letter to blackmail Otto. Tony desperately needed money, and his last resort was Otto Frank. Tony Ahlers is still the #1 suspect in the betrayal of Anne Frank.

The events of Anne’s betrayal and the Holocaust happened many decades ago. Certain things are fresh in the minds of historians everywhere; after all, Tony Ahlers has always been the prime suspect of the infamous betrayal. His sons’ confession, his job, and the only one with a motive, the arrow points right to him. His name needs to be brought to the table, so the Annex’s residents can rest in peace.

“In Spite Of Everything, I Believe That People Are Good At Heart.”

The Betrayal of Anne Frank. (2016, Sep 11). Retrieved from https://studymoose.com/the-betrayal-of-anne-frank-essay 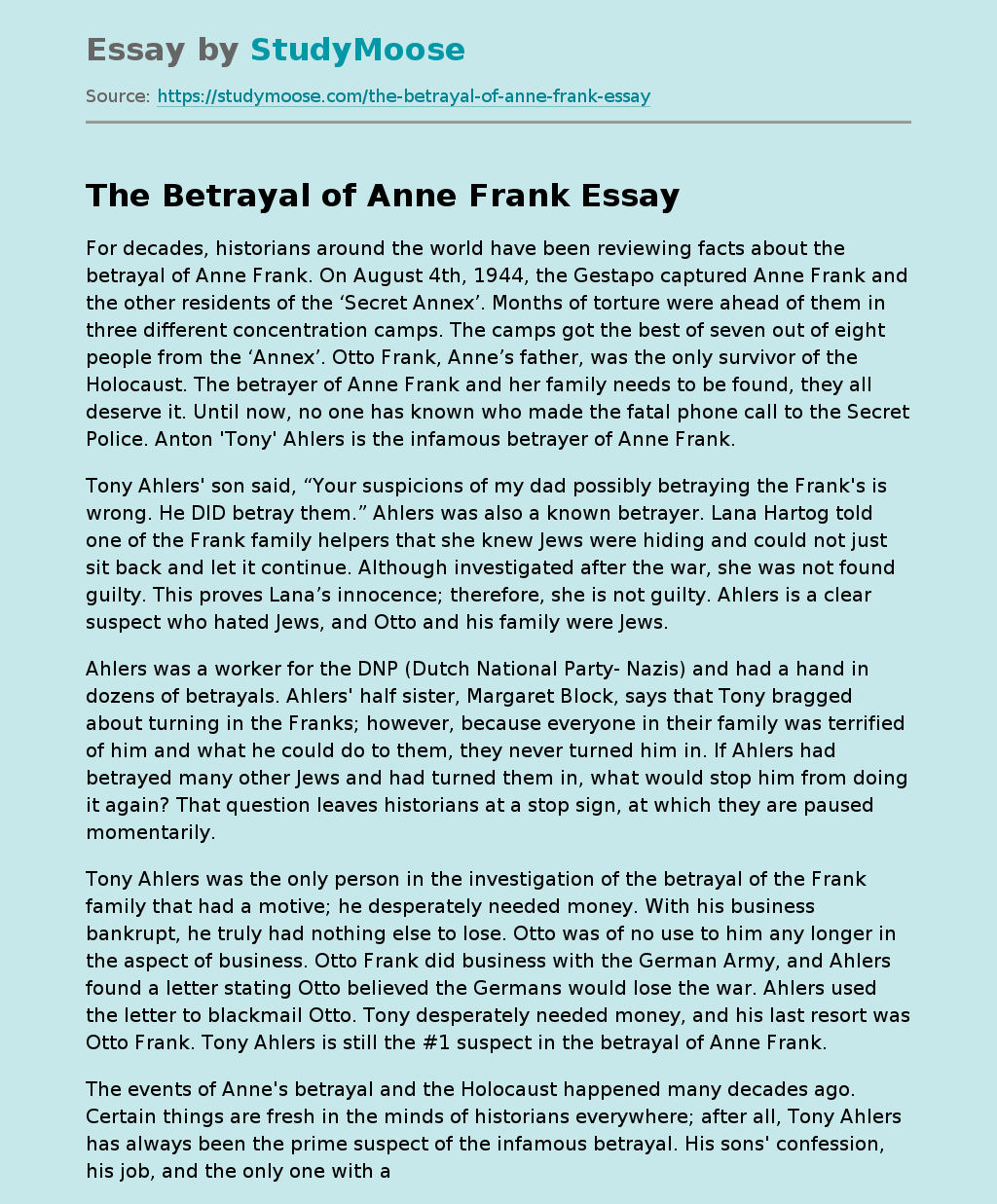