The Balance Of Nature

Living things or organisms provide each other with substances necessary for life, and a proper balance between plants and animals is needed to maintain life (1, p.246d).

Ecology is the study of interrelationships of organisms to one another and to the environment (2, p.

121). The word Ecology comes from the Greek words Oikos – house, and Logos – the way a subject is spoken about or treated. Ecology is a subject that tells about the houses of living things, in other words the study of how organisms interact with the various living and nonliving parts of the environment in which they live (3, p.14).

Biosphere is the portion of the earth and its atmosphere that is capable of supporting life (2, p.

All ecosystems are open, which means that energy and matter continually escape from the ecosystem as they are used by living organisms. Unless they are replaced, the ecosystem will collapse. Usually, the replacement comes from a biotic environment, but sometimes it happens between adjacent ecosystems. Often the pathway is difficult to determine(4, p.9).  Growth and reproduction, mortality, immigration, and emigration are among the numerous and important balancing mechanisms that affect ecosystems. They also influence behavior, physiology, and population numbers(4, p.9).

Living things are mixed together, involved in a great variety of ways, including feeding, competition, and cooperation.

Energy flows to the community, and the physical environment has profound effects on all plants and animals. The environment of any living thing consists both of other living things and of inanimate materials. The living community and its nonliving environment act together as an ecological system: an ecosystem (4, p.17).

The major parts of an ecosystem include: (1) the physical envelope of 1 2 air or water that surrounds the living unit and provides its climate, (2) the substrate on which the living unit rests or is anchored, that is, the soil, rock, or bottom sediments, (3) the assemblage of organisms-plants, animals, and microorganisms living within the given habit (5, p.585). In the ecosystem living things absorb, transform, and circulate energy and matter and then release it to the environment again. The final release comes from death ( 4, p.8). The kinds and numbers, or organisms, forming an ecosystem also affect the movement of energy and matter through the system (4, p.9). All ecosystems share certain common features. Each one of them is a dynamic mixture of the nonliving environment with the living things interlocked with great complexity (3, p.78). The whole surface of the earth can be regarded as an ecosystem-a functional ecological unit-that we often refer to as the biosphere (3, p.78).

The ability of living things to coexist in a community is only one of the factors characterizing it. Equally important is the tendency of the community to reproduce itself. One community succeeds until a stage is reached where the whole, with all its living organisms, is an approximate equilibrium with its environment. It may take decades or even thousands of years for this equilibrium to be achieved-but even then this balance is still changing. The mature community is vulnerable to slow processes of earth change, which is going on continually, as well as sudden catastrophes (6, p.443).

No organisms live with out affecting its environment and being affected in return. And it has been increasingly demonstrated that the intricate strands that form the ecological web of life also include mankind, In defying nature, in destroying nature, in building an arrogantly selfish, man-centered, artificial world, I do not see how man can gain peace of freedom or joy, writes the noted ecologist Marton Batesin in The Forestand The Sea. I have faith in man=s future, faith in possibilities latent in the human experiment, but it is faith in man as a pact of nature…faith in man saving life, not destroying it (6, p.16).

Man, other animals, and plants do not grow in isolation. The same sun energy flows through them all, and the same atoms of matter circulate constantly between them and the physical environment. Man, together with other living things, and with rocks, air, and water is linked in a complex 3 web (3, p.10).

When one examines a community, it is difficult to see in it the stability that is connoted by the popular quip of the balance of nature (6, p.44).

Some of the transport, use, and temporary storage of energy and materials comes about by such biological processes as photosynthesis, reproduction, and excretion (4, p.86).

The boundaries of an ecosystem are not absolute. They are usually defined by convenience(3, p.78). Energy and materials are also stored and circulated by physical processes in the non-living orabiotic part of the ecosystem. Precipitation, evaporation, erosion, despostion, and a variety of chemical reactions are among the processes that are constantly changing the availability of energy and matter in the system (4, p.8).

When the activities of plant=s and animal=s and their interactions with one another and their surroundings are brought together and examined as a functional unit, the importance of the physical, non-living part becomes readily apparent (3, p.78). AThe constant interactions between plants and animals in their ecosystem are the pathways by which matter and energy are distributed (4, p.8).

Plants and animals interactions represent many levels of relationships. Commonly they involve food for the animal and distribution of seed or pollination for the plant. Some of these relationships change with the seasons or with different life stages. Some of the relationships are give and take relationship, dependency, and protection (4, p.23).

Food chains are pathways in which living things obtain, use, and transfer energy. Plants trap solar energy in their manufacture of food by photosynthesis. They are basic food producers. Animals are the ultimate consumers (4, p.12).

A fundamental element in the web of life is the food chain. When a hunting animal kills its prey and eats: it is acting as one of the links of the food chain (3, p.14). In natural ecosystems, food chains tend to be long and complicated. Only a few carnivores occupy the top position, with an increase in organisms at each level (4, p.12). As one examines a food chain in terms of the animals and plants that constitute it, it soon becomes apparent that these forms can be arranged into what is called a pyramid of numbers. At the bottom, multitudes 4 of energy – producing plants, then a smaller number of herbivores that feed upon them, then a still smaller number of primary carnivores followed by an even smaller number of secondary carnivores. The animals at the top of the pyramid, the final consumers, are usually the largest in the community. The animal species at the bottom of the chain, the primary producers, are usually the smallest but most abundant members of the community (6, p.37).

All plants and animals are bound together by sharing the same air, earth, and water. They are also linked by a competition for solar energy, on which their lives depend. Once believed to be a ruthless and unbrittled battle, more recent studies of this struggle for existence suggests that cooperation and interdependence may become important for the survival of a species than a no-quarter (6, p.105).

Interspecific competition occurs when two species negatively affect one another. Two kinds of competition are recognized which include expletive and interference competition (6, p.561).

Expletive competition occurs when individuals of one species, by consuming one resource, usually food, deprive individuals of another species of that resource and thereby lower the second species= population growth rate (6, p.561).

Interference competition is more direct. It occurs when individuals of one species harm individuals of the second species. The degree to which such an effect is harmful can be different. Organisms may kill other organisms by producing toxins or fighting. Fighting may also produce injuries (6, p.561).

The balance of nature is the state in an ecosystem where the interrelationships of organisms to one another and to their environment are harmonious and integrated to a considerable degree, a climate forest. This balance may be upset in many ways, such as by a drastic change in environmental conditions (erosion followed by death of many plants) or by a great increase in numbers of a certain organism (2, p.41).

Ecosystems vary widely in respect to their efficiency of production, and many of those that are exploited recover slowly, if at all, from disturbance (95, p.587).

Catastrophes are essential for the preservation of certain ecosystems (7, p.19). When an ecosystem=s functioning is disturbed by a fire or flood, 5 it will frequently show some degree of resilience in returning to its normal state, provided that the disturbance has not been too severe or long-lasting (5, p.587).

Modern man engrossed by his own problems, increasingly isolated from nature by his cities, has only recently begun to rediscover an ancient truth: he represents just a strand in an infinitely complex web of life that shares the earth (6, p.9).

The ecological equation is simple. When there are too many predators, not enough resources, and a great deal of competition, an animal population dies out. But, when the opposite occurs, the population explodes(8, p.13). The most natural method of controlling outbreaks is biological control (8, p.13).

In conclusion, the whole ecosystem works together. Even though all the webs of life are complicated it is simple in God=s eyes and He is in control of it all.

The Balance Of Nature. (2016, Jul 11). Retrieved from http://studymoose.com/the-balance-of-nature-essay 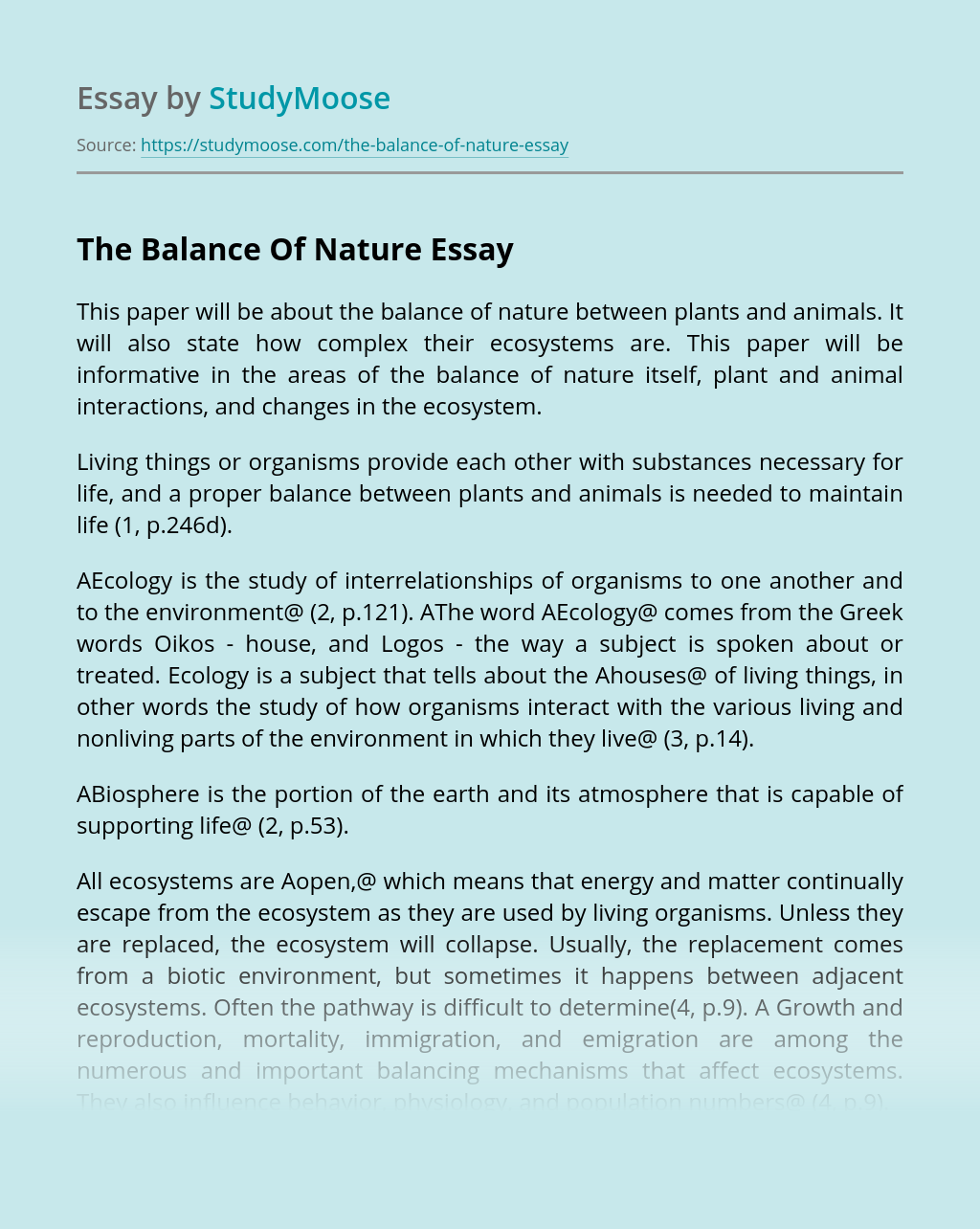 Don’t waste time
Get a verified writer to help you with The Balance Of Nature
Hire verified writer
$35.80 for a 2-page paper
Stay Safe, Stay Original