The relationship Benedick and Beatrice

The relationship Benedick and Beatrice have is unusual throughout the play, particularly as deception plays a major role in bringing the pair together. Firstly they are deceiving themselves into believing they feel nothing for each other, and wage a ‘merry war’ trading witty insults, then both are tricked into believing the other is enamoured of them. The result of this is the positive resolution of their relationship: an emotional declaration of true love, and finally a sincere and very open relationship, all ironically caused by deception.

At the very first mention of Benedick in the play, in Act 1, Scene 1, Beatrice begins a witty assault, and the audience soon realises that she is deceiving herself about the nature of her true feelings towards Benedick. Her reference to Benedick challenging Cupid pokes fun at Benedick’s supposed image of himself as ‘loved of all ladies’: she argues he is arrogant and that this is unlikely. However, this early reference linking Benedick to Cupid is a hint to the audience of their love to come.

Although Beatrice’s remarks are ruthless, the fact that they are so witty, and said by Beatrice in an amusing, not a sour tone, shows us that she doesn’t really mean them. The audience can see this, and Shakespeare reinforces this idea using the character of Leonato to explain the ‘merry war’ between Benedick and Beatrice.

Therefore the audience is able to watch with anticipation and amusement when we see this merry war in action. Benedick enters, and Beatrice soon strikes up their conversation with the merciless remark, ‘I wonder that you will still be talking, Signior Benedick: nobody marks you’.

We can instantly see how similar the pair are as Benedick retorts immediately, clearly possessing just as much wit as Beatrice: ‘What, my dear Lady Disdain, are you yet living?’, teasing her about her age and the fact that she is notorious for her scornful character. The conversation continues as each play upon the words of the other to form a new razor-sharp attack.

Their conversation is full of sex-antagonism: Benedick says he is ‘loved off all ladies, only you excepted’ and Beatrice remarks that she would rather ‘hear my dog bark at a crow than hear a man swear he loves me’. This gives us insight into their characters, as both are dismissive of the opposite sex, and resolutely believe that they will stay unattached. Yet even as they argue their similarities make the audience realise how perfect they would be together, and that both Beatrice and Benedick are deceiving only themselves that they do not love the other.

This self-deception becomes even more apparent in Act 2, Scene 1, the scene of the masked ball. Shakespeare uses physical deception in this scene to bring Benedick and Beatrice closer together. Benedick’s desire to ascertain what Beatrice truly thinks of him is a certain sign of the love he feels, yet is hiding from everyone including himself. He decides to learn Beatrice’s true opinion of him when he is masked, realising that she would never tell him if she knew who he was. However, Beatrice realises who he is and continues the ‘merry war’, delighting in insulting him once more, ‘He is the prince’s jester, a very dull fool’.

Benedick’s private response to this, later on in the scene, is significant, for Shakespeare once again uses deception in the very language Benedick speaks. Benedick expresses an unexpectedly strong reaction, declaring that Beatrice’s ‘every word stabs’ and feeling that she ‘misused me past the endurance of a block’. Benedick’s feeling of hurt and indignation could be interpreted as an unmistakable hint, clearly revealing his true feelings about Beatrice. Conversely it is possible that Benedick’s strong reaction is purely anger towards Beatrice, and that he genuinely begins to think negatively of her: ‘all disquiet, horror, and perturbation follows her’.

In her conversation with Don Pedro, Beatrice gives a hint of a reason as to why there is such animosity between her and Benedick. She implies that they had former dealings, ‘he leant it me awhile’ that he professed he had feelings for her, and she returned them doubly, but then he proved to be false. Although Shakespeare never returns to this idea of previous courting between the two, it may still be useful in understanding their relationship, and it is interesting that it implies that deception existed between them before.

By this point in the play, the audience and the other characters in the play have realised that Benedick and Beatrice are perfect for each other, even if they won’t admit it to themselves. Shakespeare uses the character of Don Pedro to think of a scheme, the ‘gullings’, involving positive deception: to stop Beatrice and Benedick deceiving themselves and to bring the pair to the positive resolution of their relationship. Don Pedro explains that he formulates this idea simply so that ‘the time shall not go dully by’, yet the reason may be that he is a romantic character in the novel, and as such can see the hidden love between Benedick and Beatrice, and wishes them to discover it and find happiness in the positive resolution of their relationship. Benedick has already revealed to the audience that he cares for Beatrice, but is just deceiving himself that he doesn’t. Don Pedro, Leonato and Claudio, people that Benedick trusts, deceive Benedick into believing that Beatrice secretly loves him, guessing and hoping that he will realise the strength of his true feelings for her, and stop deceiving himself that he feels otherwise:

The gulling scene begins with Benedick’s soliloquy in which he describes his perfect girl; he describes Beatrice without realising, yet the audience does, and it is very obvious to us that he is in love with her already. Benedick’s opinions and general view on women seems to have softened by this point in the play, as he doesn’t mention his fear of betrayal, and when describing his perfect girl, he describes personality, not looks: he explains she would be ’rich’, ‘wise’, ‘virtuous’, ‘mild’, ‘noble’, and then goes on to say that ‘her hair shall be… of what colour it please God.’ This humour reassures the audience that when resolved, Benedick and Beatrice’s relationship will not change entirely, yet will not continue to be an argumentative relationship: it will be light-hearted. Benedick’s façade as a love-scornful bachelor already seems weak and hardly credible, and we can see that he is nearly ready to discover his love for Beatrice. The deception only works because the three men make it very convincing. Benedick is certain that Leonato wouldn’t take part in deceiving him, he even says ‘I should think this a gull, but that the white-bearded fellow speaks it’. Leonato’s very presence causes Benedick to be deceived.

The three men introduce the idea of romance naturally into their conversation with a song about love and man’s inconstancy, to make sure they get Benedick’s attention. Claudio is present because he is already connected with love in the play due to his relationship with Hero, which makes his views seem more plausible. It is also convincing because they debate whether or not to tell him, and then decide against it. They also point out the faults in his personality: ‘the man…hath a contemptible spirit’, as they point out the virtues in hers: ‘she’s an excellent sweet lady’, which makes their supposed decision not to tell him about Beatrice’s love even more credible. Shakespeare uses the character of Don Pedro as the main force behind the gulling: it is he who leads the conversation; he is calm, thoughtful, wistful and therefore very convincing. For Benedick to be able to admit the love he has for Beatrice, he needs to truly believe that she is in love with him, and for this reason the gulling must be made convincing.

This fact verifies what the audience has seen since early in the play, that Benedick has always loved Beatrice, but has just suppressed this love because he believed she didn’t return it: he has been deceiving himself. This is also immediately clear from Benedick’s reaction to what he overhears. Although he is at first incredulous, by the time he has overheard the entire conversation he is convinced ‘this can be no trick’. Shakespeare brings an end to Benedick’s self deception as Benedick immediately decides to return Beatrice’s strength of feeling, saying ‘love me? It must be requited’. Benedick goes back on all his previous comments about women and love, agreeing with the men’s compliments to Beatrice, and deciding he will be ‘horribly in love with her’. Although humourous, his reaction still very moving, as it is so clear that he cared about Beatrice before this moment and has only just recognised this within himself.

At this point in the play it is harder for the audience to perceive Beatrice’s hidden love for Benedick, although we can still see that they are perfectly matched. It is Hero and Ursula who deceive Beatrice into believing Benedick is secretly in love with her, and they are successful in making her realise her true feelings for him. This second gulling is just as credible as the first, as the two women use many of the techniques that were used on Benedick: they make Beatrice realise that she is too scornful of men, forcing her to assess herself and consequently discover her true feelings. Their conversation is carefully planned: Hero realistically doesn’t praise Benedick more than Claudio: ‘He is the only man of Italy, always excepting my dear Claudio’ and Ursula, as a servant, isn’t too critical of Beatrice ‘she cannot be so much without true judgement’.

The two speak eloquently and metaphorically, in verse, which is traditionally most romantic. As a result Beatrice is utterly taken in, although her initial reaction is one of shock and disbelief: ‘What fire is in mine ears? Can this be true?’. Once Beatrice is deceived into believing Benedick loves her, she decides instantly to change herself for him: she vows she will ‘tame’ her ‘wild heart’, and lose her traits of ‘contempt’ and ‘maiden pride’. Her conscious decision to change herself so that she can be with Benedick demonstrates her former love for him, and her instant passionate reaction proves that she had indeed been deceiving herself, and has loved him all along.

The deception devised by Don Pedro allows Benedick and Beatrice to end their self-deception and acknowledge and embrace their genuine feelings for one another. Benedick and Beatrice’s relationship is created on a foundation of deception, yet ironically is strengthened by this. It is in Act 4, Scene 1, that the characters Benedick and Beatrice declare their love for each other, and we see the unquestionable positive resolution of their relationship; despite the fact that it is tested by the events in the other plot of the play: the collapse of Hero and Claudio’s engagement.

Benedick and Beatrice do not deceive themselves or each other any longer, Benedick professes ‘I do love nothing in the world so much as you’, and Beatrice likewise tells him ‘I love you with so much of my heart that none is left to protest’. This is a wonderful contrast to all the deception it has taken to bring them together, and also to the relationships of the other characters in the play: as Claudio and Hero’s relationship has at this point in the play disintegrated due to deception and an innate lack of trust. Deception unquestionably plays a significant role in this positive resolution of their relationship: Benedick and Beatrice have ultimately discovered an emotionally open relationship as a direct result of deception.

The relationship Benedick and Beatrice. (2016, Aug 14). Retrieved from http://studymoose.com/the-relationship-benedick-and-beatrice-essay 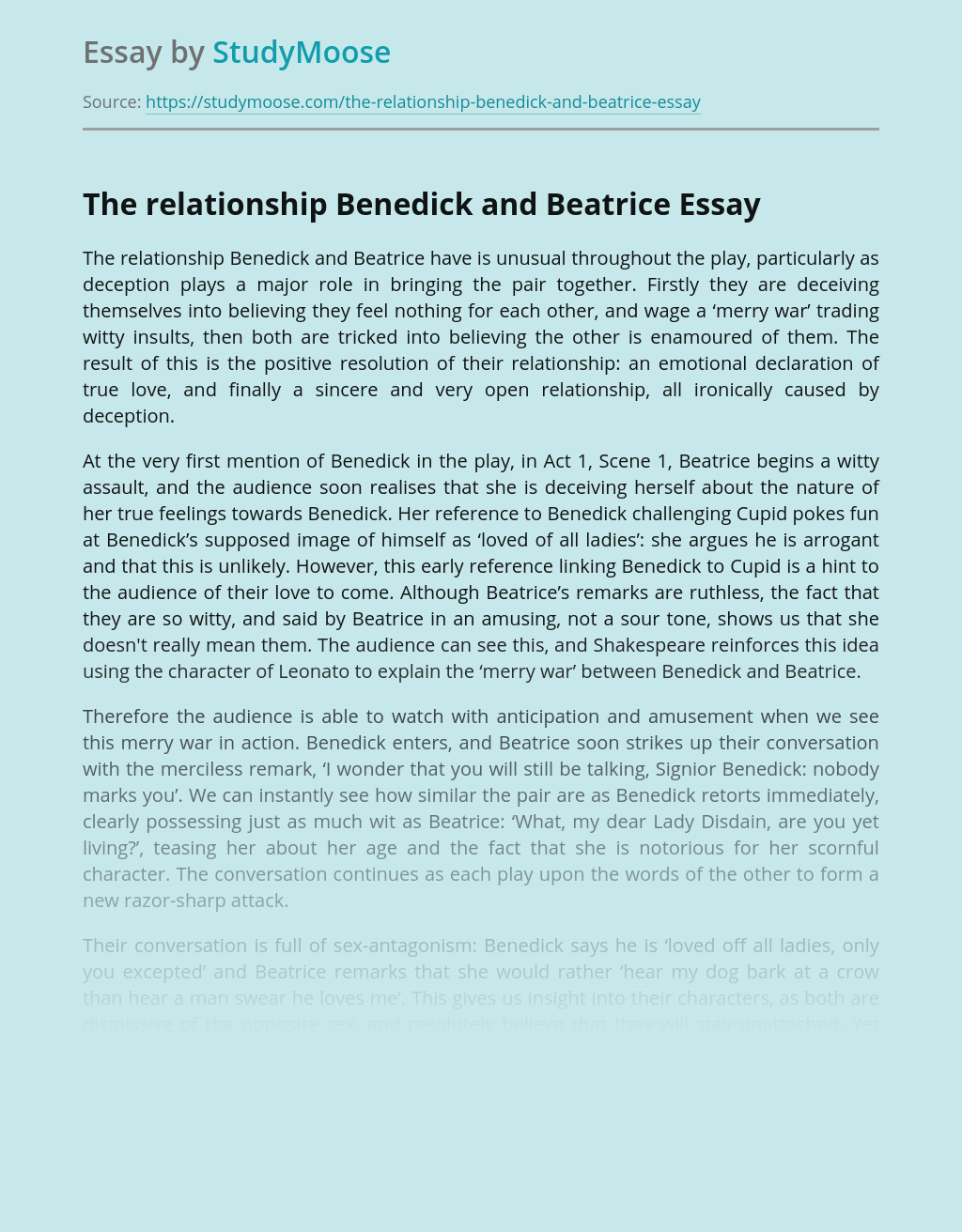 Don’t waste time
Get a verified expert to help you with The relationship Benedick and Beatrice
Hire verified expert
$35.80 for a 2-page paper
Stay Safe, Stay Original