Compare and Contrast: Claudio and Benedick

Shakespeare’s comedy, Much Ado About Nothing, is a play that follows a small group of friends from a high-class society in Massina. Two of this group are friends are Claudio and Benedick. In the beginning of the play they are seemingly similar, in that they both are of an upper-class upbringing and do their best to maintain their social reputation. The characters are made as to enhance their differences by the end of the play; they are foils to one another.

Turn in your highest-quality paper
Get a qualified writer to help you with
“ Compare and Contrast: Claudio and Benedick ”
Get high-quality paper
NEW! AI matching with writer

Both Benedick and Claudio find themselves fooled by other characters in the play and have to decide what they are willing to believe is true and what is false, furthermore both characters find love by the end of the play, but which means they use to get there differ. In the beginning of the play Claudio is introduced as an accomplished young military man who has just come back from a successful battle. He claims to be “in love” with a woman named Hero.

Before confronting her about the feelings he has for her, Claudio asks his friend Benedick to tell him what he personally thinks about Hero. In the hopes that he will confirm that she is in fact as fair and lovely as Claudio thinks she is. “I pray thee tell me truly how thou lik’st her.” (Much Ado About Nothing 1.1.171-172)

The “love” Claudio feels for Hero is based on the approval of his friends. Claudio goes on to ask, yet another associate, Prince Don Pedro, how he to feels about Hero.

Claudio is clearly a shallow minded individual with a limited capacity to think of only a few thoughts occupy his mind at one time. Claudio even makes not of it himself when talking to Benedick about when he first came to love Hero. I look’d upon her with a soldier’s eye, That liked, but had a rougher task in hand Than to drive liking to the name of love: But now I am return’d and that war-thoughts Have left their places vacant, in their rooms Come thronging soft and delicate desires, All prompting me how fair young Hero is, Saying, I liked her ere I went to wars. (Much Ado About Nothing 1.1.289-295)

Foil to Claudio is Benedick, an arrogant young man who, also like Claudio, took part in the war and was brought up in a high class society. Benedick is also concerned is his public image. He considers himself a ladies’ man of sorts and does not want to be tied down by any woman and would rather die than be wed because he does not trust women. That a woman conceived me, I thank her; that she brought me up, I likewise give her most humble thanks. But that I will have a recheat winded in my forehead, or hang my bugle in an invisible baldrick, all women shall pardon me. Because I will not do them the wrong to mistrust any, I will do myself the right to trust none; and the fine is, for the which I may go the finer, I will live a bachelor. (Much Ado About Nothing 1.1.229-237)

As if that did not make his point, Benedick goes on to say that he would prefer then to be bound by holy matrimony. He tells his friends that if he ever does anything so ridiculous as to fall in love that as his friends they should shoot him for his follies. “If I do, hang me in a bottle like a cat and shoot at me; and he that hits me, let him be clapped on the shoulder, and called Adam.” (Much Ado About Nothing 1.1.248-250) Because at this time Benedick truly believes that love is the worst fait for any man.

In his attempts to find public acceptance, Claudio proves to be easily fooled into believing anything he is told despite obvious lack of proof of what he is being deceived into thinking is true. When approached by Don John the bastard, the brother to Don Pedro and the least trusted person in Messina. Claudio falls for the lie that his friend, Don Pedro, who offered to help Claudio woo Hero has actually planed to woo her for himself, Claudio as gullible as he is believes Don John’s lies. “Claudio permits the masked Don Pedro, prince of Arragon, to woo Hero in his place but then is misled into believing that the prince has betrayed him and courted Hero for himself.” (Shakespeare’s Comedies 104) Once the treason is proven false Claudio goes right back to being his pleasant self and accepts Hero with no questions asked. “Lady, as you are mine, I am yours: I give away myself for you and dote upon the exchange.” (Much Ado About Nothing 2.1.304-306) Benedick is so back and forth with his feelings for Hero it makes his love appear to be very uncertain.

After being bombarded by all the recent talk of love from all of his friends, including Claudio, a military man he would have thought would never have let himself be attached to any lady. Benedick begins to wonder if he too might fall for someone, because if a solder like Claudio can be swayed to fall in love, surely Benedick himself could also. He then decides what sort of woman would be able to win his heart. Benedick’s standers are high and very specific. One woman is fair, yet I am well; another is wise, yet I am well; another virtuous, yet I am well; but till all graces be in one woman, one woman shall not come in my grace. Rich she shall be, that’s certain; wise, or I’ll none; virtuous, or I’ll never cheapen her; fair, or I’ll never look on her; mild, or come not near me; noble, or not I for an angel; of good discourse, an excellent musician, and her hair shall be of what colour it please God. (Much Ado About Nothing 2.3.26-35)

With the prospect of love already in his mind Benedick becomes a victim of his cohorts plan to fool him into that believing that Beatrice, an equally idealistic character with a witty personality, who Benedick’s friends think would be perfect for him, is in love with him. After hearing how much she loves him, Benedick changes his views entirely. “a bachelor in words more than sentiment, so that, during his monologue in 2.3, we watched with sympathy and knowing as he persuaded himself, easily, into love.” (Much Ado about Nothing (review)

Shakespeare Bulletin 25.3 (2007) 119-122) Skeptical at first, Benedick has a moment of realization as he looks in himself. Through this introspection Benedick leads himself to the conclusions that Beatrice is indeed the perfect match for him and fits his criteria for the only woman that could make him fall in love. “-’tis so, I cannot reprove it; and wise, but for loving me; by my troth, it is no addition to her wit, nor no great argument of her folly, for I will be horribly in love with her. I may chance have some odd quirks and remnants of wit broken on me, because I have railed so long against marriage” ( Much Ado About Nothing 2.3.228-234) Though his own insight, Benedick changes his whole view about love all together.

In conclusion both Claudio and Benedick are deceived at one point or another in believing something that they are told with no real proof, and both find love by the end of the play, but the means by which they find their way to love differs. Benedick’s path is much more liner and though introspection on how he feels about Beatrice. Were Claudio’s path is sways back and forth due to his insecurities and follies.

Compare and Contrast: Claudio and Benedick. (2017, Feb 10). Retrieved from https://studymoose.com/compare-and-contrast-claudio-and-benedick-essay 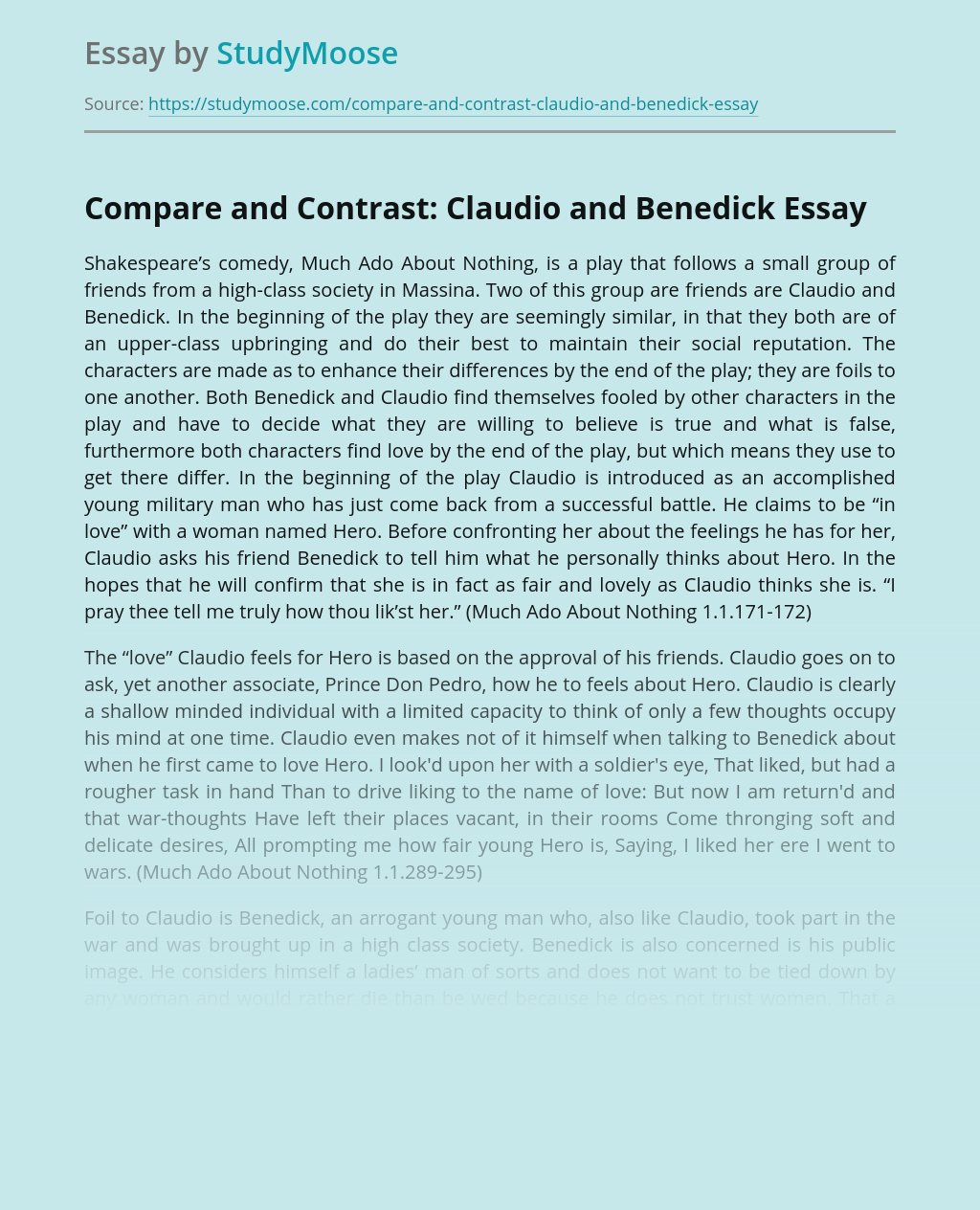 Turn in your highest-quality paper
Get a qualified writer to help you with
“ Compare and Contrast: Claudio and Benedick ”
Get high-quality paper
Helping students since 2015
Stay Safe, Stay Original