Assignment About Beatrice And Catherine

Don't use plagiarized sources. Get your custom essay on
“ Assignment About Beatrice And Catherine ”
Get custom paper
NEW! smart matching with writer

When other characters do not conform to his idea of a man’s specific characteristics, it leads to conflict, especially with Rodolfo, Catherine and subsequently the other characters. Eddie is fundamentally a simple, straightforward man who is seen to be kind, humorous and generous in anticipating the illegal arrival of Beatrice’s cousins Marco and Rodolfo. From the start of the play, we see that Eddie is respected in the Red Hook community. By telling Eddie ‘… you got a lotta credit comin’ to you…’ Louis highlights Eddie’s respect in the community.

Eddie’s views about the qualities of a man are quite cynical. He feels that a man should be strong and that he should go to work and earn money for his family. Eddie’s views and behaviour causes conflict on a small scale. At the start of the play, Eddie criticises Catherine when he shows clear hostility to Rodolfo and in the end Marco. The work Eddie does can influence his behaviour because it is ‘a man’s job’.

It requires a lot of strength which is one of the qualities Eddie feels a man should have. Some of the people he works with also share Eddie’s views. Being more ‘manly’ than Eddie causes conflict and being less ‘manly’ than Eddie’s expectations also cause conflict.

Rodolfo’s physical appearance and characteristics do not live up to Eddie’s expectations of a man as Rodolfo has blonde hair and he can cook, sew and sing. Catherine (Eddie’s niece) finds Rodolfo attractive due to the fact that he has no responsibilities and he has a more frivolous, light hearted attitude to life. However, Eddie finds him repulsive and unmanly. Eddie is suspicious of Rodolfo’s interest in Catherine; believing that he wants to marry her in order to gain an American citizenship-‘… he’s only bowin’ to his passport’. However it becomes clear to the audience that Rodolfo’s intentions towards Catherine are purely because of his love for her.

Eddie’s reluctance to be displaced in Catherine’s affections as well as his desire for her, force him to confide his suspicions of Rodolfo’s apparent homosexuality to Alfieri. Eddie says to Alfieri – ‘the guy ain’t right, Mr. Alfieri’. Alfieri realises the true nature of the situation and responds by saying ‘there is too much love for the daughter, too much love for the niece’. Eddie fails to understand what Alfieri is trying to say and thereby seals his fate. Even after Alfieri tells Eddie to let things run their natural course, he betrays Marco and Rodolfo by calling the Immigration Bureau.

Not only is it Eddie who displays his distrust of Rodolfo, but the longshoremen as well. Eddie tells Beatrice that they are calling Rodolfo ‘Paper Doll’. Eddie also tells Beatrice that he thinks that Rodolfo is ‘like a weird’ and ‘… with that wacky hair; he’s like a chorus girl or sump’m’. Eddie’s suspicions of Rodolfo lead to a dramatic tension at the start of Act two where he drunkenly returns home, pins Rodolfo to the wall and kisses him. When people are drunk they normally do the things that they have always desired to do therefore Eddie kissing Rodolfo when he was drunk gives me the impression that Eddie is homosexual and that he had always wanted to kiss Rodolfo.

Although one brother doesn’t meet Eddie’s expectations of a ‘real man’, the other brother does, and not only does he meet it, he also surpasses it. Marco is a stronger, more reticent man who has come to America to earn money so that he can send it to Italy to feed his starving wife and children. By doing this he conforms to Eddie’s expectations by not only showing his strength but also showing his responsibility as well. He is responsible to his wife and children by feeding them and he is also responsible to Rodolfo as he looks out for him. Eddie calls Marco a ‘real man’. Mike describes him as ‘a regular bull’ and also says ‘if they leave him alone he woulda unload the whole ship by himself’.

Marco’s masculinity leads to conflict when he and Eddie have a trial of strength at the end of Act One. By lifting the chair higher than Eddie and over Eddie’s head, Marco not only replaces Eddie as the most important and strongest man in the household, but he also makes Eddie feel threatened by demonstrating conventionally ‘masculine’ characteristics. Another climatic moment where Marco’s manliness leads to conflict is at the end of Act Two which is Eddie’s death. Eddie pulls a knife out on Marco but he (Marco) displays his strength once again by turning Eddie’s weapon on himself (Eddie) consequently resulting in Eddie’s death.

Eddie has a lack of formal English and he speaks in conversational Brooklynese- ‘listen, I could tell you things about Louis which you wouldn’t wave to him no more’. The characters in ‘A View from the Bridge’ lack the language to express themselves fully and sometimes do not want to put their ideas into words. This is often the case between Eddie, Beatrice and Catherine. Eddie is urged to protect Catherine from discovering her independence which makes him increasingly sensitive to the presence of Beatrice’s cousins and to Rodolfo in particular who Catherine rapidly becomes attracted to. Catherine and Rodolfo’s planned marriage brings out an increasingly aggressive reaction in Eddie and starts to break the family apart. Catherine becomes more rebellious and independent.

Assignment About Beatrice And Catherine. (2020, Jun 02). Retrieved from https://studymoose.com/beatrice-and-catherine-6123-new-essay 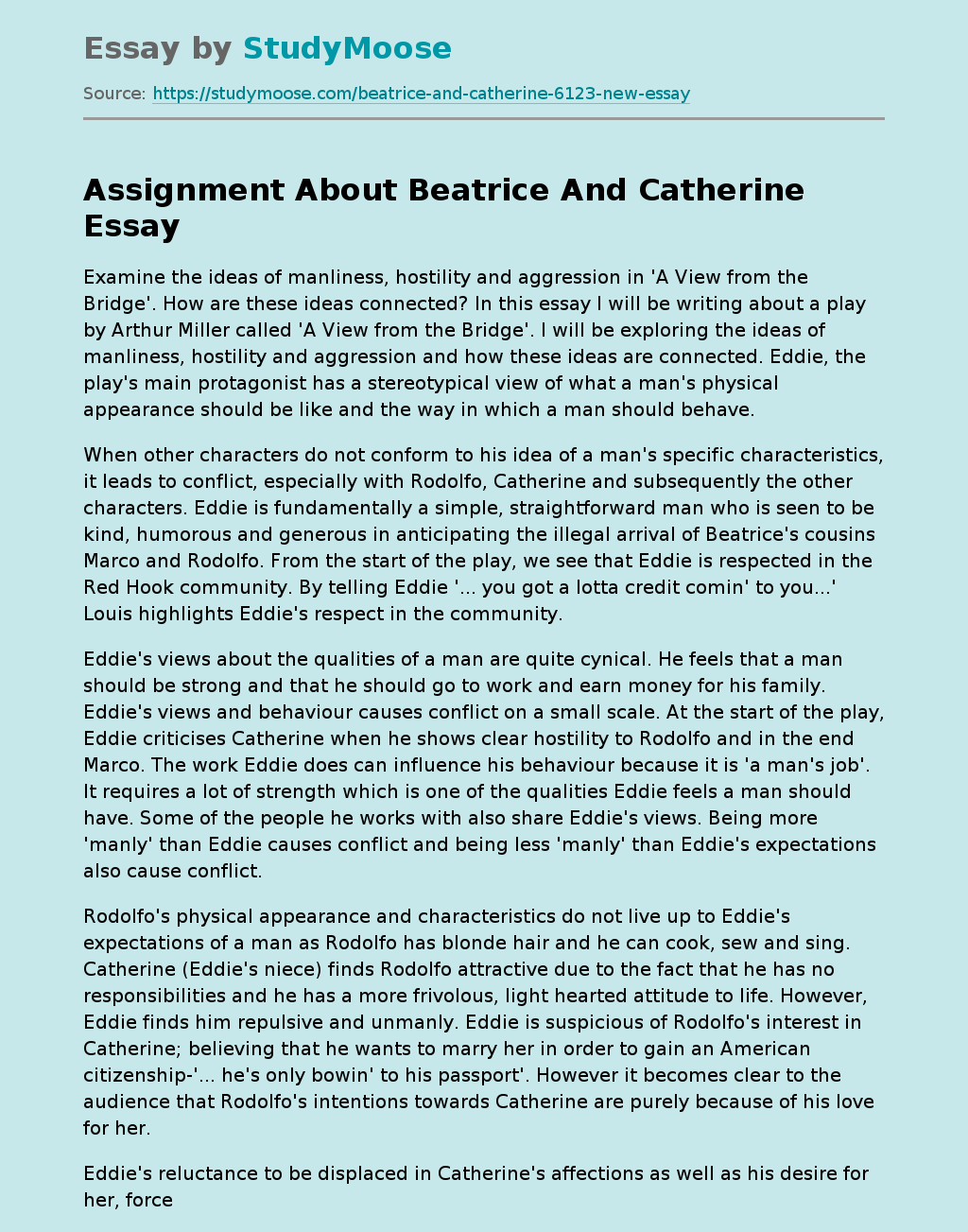