The Love Between Heathcliff and Catherine

Love is considered ordinate when two individuals have deep affections and respect for one another. In Wuthering Heights by Emily Brontë, Heathcliff and Catherine Earnshaw have deep and sincere love for each other. They spent most of their childhood with one another. The love that Heathcliff and Catherine experience is pure and true. They both contributed different yet special things towards their distinctive relationship. The trust and affection between them would have made the greatest love one has ever seen.

Heathcliff and Catherine’s love would be ordinate is because although they grew up together, they were not siblings.

Turn in your highest-quality paper
Get a qualified writer to help you with
“ The Love Between Heathcliff and Catherine ”
Get high-quality paper
NEW! AI matching with writers

It took Catherine time to get used to Heathcliff and consider him her friend; she did consider Heathcliff to be her brother. When Mr. Earnshaw brought Heathcliff home from Liverpool, Catherine didn’t immediately like him. When Catherine first saw Heathcliff, she welcomed him by, “grinning and spiting at the stupid little thing,” (251). Catherine’s friendly love and appreciation for Heathcliff came with time.

They could be compared to two friends who grew up together and share a non-sexual love. There is nothing about their love that is incestuous or wrong.

She feels that she is Heathcliff, meaning that without being physically one, they will still be one essence for eternity.

By the early middle of the novel, Catherine chooses to marry Edgar Linton instead of Heathcliff. After being bitten by the dog in the end of chapter VI and spending five weeks at Thrushcross Grange, Catherine became a Victorian woman. She realized what is considered upper class by society and the fact that Edgar Linton fit perfectly into that position. Heathcliff, on the other hand, was the complete opposite of what Edgar Linton represented. The reason Catherine gives for her decision to marry Edgar, is on the other end of the spectrum. She told Nelly that, “…if Heathcliff and I married, we should be beggars? Whereas, if I marry Linton, I can aid Heathcliff to rise, and place him out of my brother’s power.”(290) Catherine marries Edgar Linton to help Heathcliff escape from Hindley Earnshaw’s wrath. This reason makes Catherine seem selfless and protective towards Heathcliff.

The love story between Heathcliff and Catherine is a very powerful one. A major point of argument in this novel is whether or not their love is ordinate or inordinate. There is no reason for their love to be inordinate, since they are not wrong in loving each other. Heathcliff and Catherine are one and the same. They experience pain and happiness because of one another. There is no difference between these two lovers and other lovers in the world, except for the fact that their love story is a tragedy.

The Love Between Heathcliff and Catherine. (2017, Mar 13). Retrieved from http://studymoose.com/the-love-between-heathcliff-and-catherine-essay 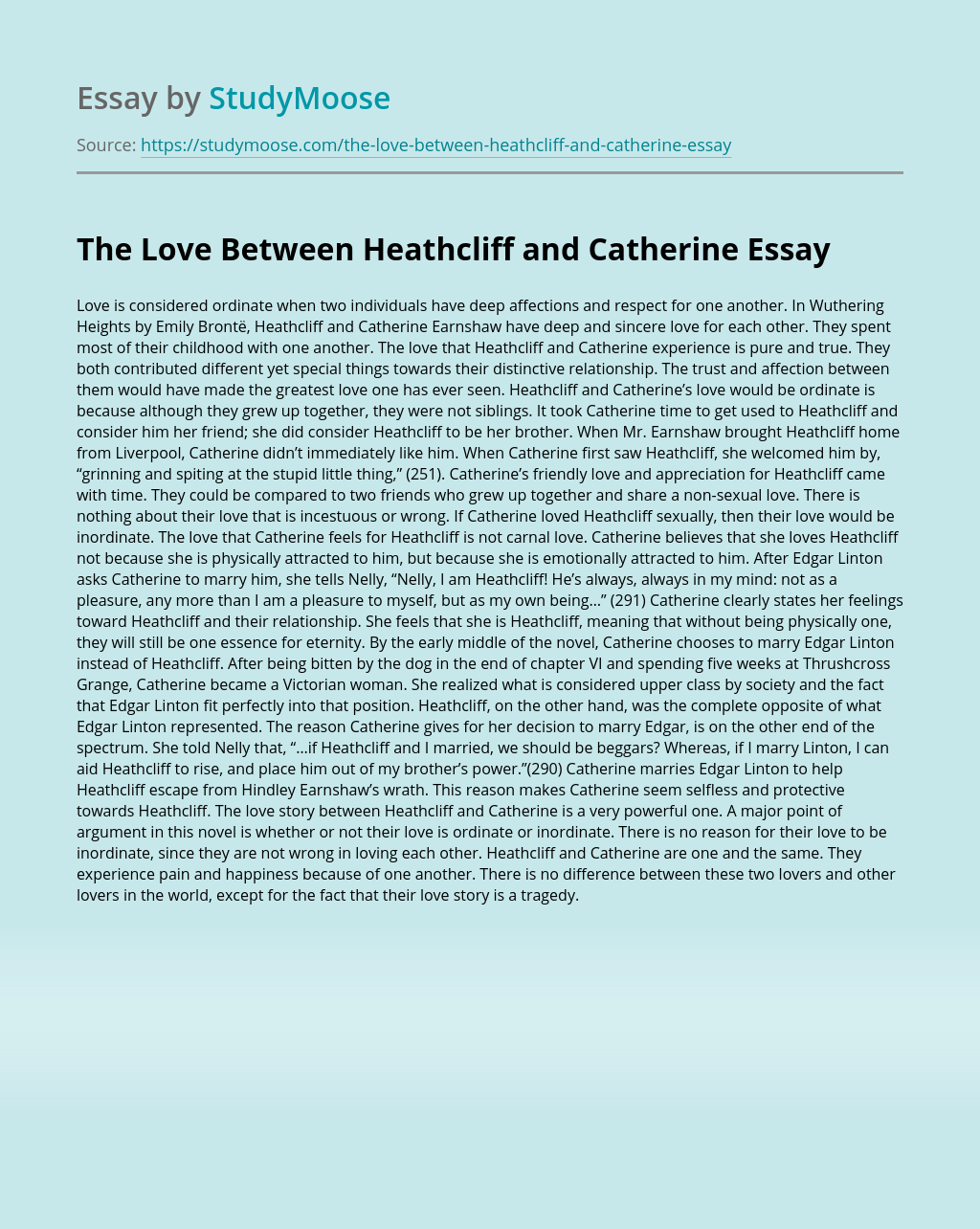 Turn in your highest-quality paper
Get a qualified writer to help you with
“ The Love Between Heathcliff and Catherine ”
Get high-quality paper
Helping students since 2015
Stay Safe, Stay Original