Language and Imagery in Wuthering Heights

In Wuthering Heights, Emily Bronte uses Language and imagery to create a very stark contrast between Heathcliff, and Edgar Linton. This contrast is not only illustrated in how these characters act, but also in their appearance, usual setting and the language that is used to describe them. Emily Bronte first uses the raw basics of the characters Heathcliff and Edgar Linton to right away let us know that these characters are polar opposites. She does this with the imagery of both characters.

Don't use plagiarized sources. Get your custom essay on
“ Language and Imagery in Wuthering Heights ”
Get custom paper
NEW! smart matching with writer

In chapter 7, Heathcliff describes Edgar as having light skin and fair hair, whereas in the same chapter it is mentioned that Heathcliff has dark hair and dark skin. This use of binary opposites suggests to the reader already, that Heathcliff and Edgar are complete opposites, right down to their core.

This use of Binary opposites and imagery is also applied to where Heathcliff and Edgar live, Edgar living in Thrushcross Grange, the light, large house, and Heathcliff living in the dark, gloomy and sinister house of Wuthering Heights.

This imagery of the two houses reflects the characters of the two men. Language is also used effectively and in abundance by Bronte to illustrate the two characters differences. Bronte uses contrasting Lexical fields pertaining to heaven and hell to not only show the contrast in character between Heathcliff and Edgar, but to suggest that one is good and one is evil.

For instance Heathcliff is constantly being described as or being referred to with the use of words which relate to hell.

His eyes are described as ‘devils spies’ and ‘ dark fiends’ by Nelly, and coupled with his appearance of being dark skinned and haired, he is closely associated with the devil, who represents evil. Edgar on the other hand, is described with a lexical field of a more heavenly nature. His eyes are referred to as being little Angels and his features are continuously called angelic and soft, which suggests he is similar to an angel, which is of course good. By using contrasting lexical fields for each character, Bronte uses selective language to suggest that these two are not only opposites, but they are Good and Evil.

Heathcliff is, when being talked of, surrounded by sinister sounding words which aren’t necessarily talking about his character explicitly, but they help to create a dark and sinister atmosphere around his character. An example of this is in chapter seven where Nelly is talking about Heathcliff she uses words such as ‘lurk’ and ‘vicious’ and this is what creates this dark atmosphere. Bronte does the same with Edgar, as when he is talking or being talked about, words such as ‘gently’ and ‘beautiful’ are used and this helps to project a calm and soft atmosphere around Edgar, which is completely different to the atmosphere Heathcliff carries with him, and thus increases the contrast that the reader sees between Heathcliff and Edgar.

Catherine brings our attention to the contrast between the two in chapter 9 where she says ‘(Heathcliff’s soul) and Linton’s is as different as a moonbeam from lightning, or frost from fire’ This use of binary opposites again suggests with the use of the words fire and lightning that Heathcliff is violent and harmful and burns, which again associates him with hell, and the use of Frost and moonbeam to describe Edgars soul to suggest he is soft, light, cool and calm reinforces the already stark contrast between the two and again suggests them not only to be different, but to be complete opposites.

Language and Imagery in Wuthering Heights. (2016, May 13). Retrieved from http://studymoose.com/language-and-imagery-in-wuthering-heights-essay 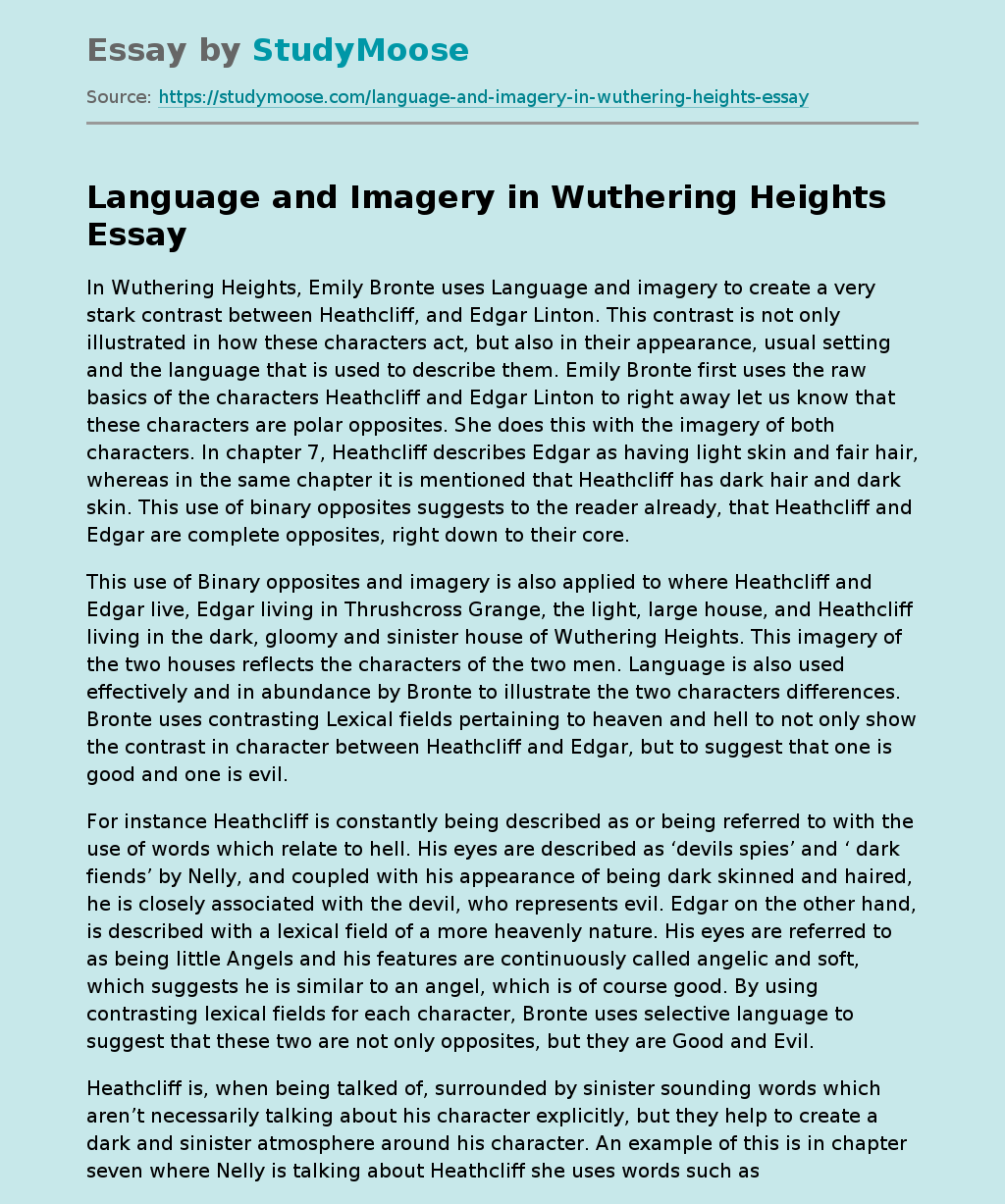