Although Heathcliff was a victim several times within Wuthering Heights, does this justify his immoral actions that hurt those around him? It is true that Catherine is extremely selfish, but she never intentionally or deliberately planned to hurt anyone in this novel. Heathcliff’s manipulative and vengeful actions are truly those of a villain.

Heathcliff as a Victim

Nelly’s unwillingness to acknowledge Heathcliff’s presence to Catherine in a crucial time allowed him to overhear the hurtful things that she was saying.

Don't use plagiarized sources. Get your custom essay on
“ Wuthering Heights Character Heathcliff is Victim or Villain ”
Get custom paper
NEW! smart matching with writer

If Nelly had tried to stop Heathcliff from running away, he may have been present to hear all of the positive things that Catherine would later declare about him. Although Heathcliff is her soul mate, Catherine married Edgar instead because of his money and social status. Her selfishness makes Heathcliff a victim, and denies him of his true love. Heathcliff is a victim because his parents left him, and because of his darker skin. The Linton’s show prejudice towards him, and judge him by his looks.

Catherine as a Victimizer

Catherine truly hurts Heathcliff by marrying Edgar, whom she does not love. She knows that Heathcliff is her soul mate, but does not find him suitable for a husband. Her selfishness in turn causes many problems throughout the novel. When Edgar visits Wuthering Heights to see Catherine, she betrays Heathcliff by telling him to leave her and Edgar alone. Although Heathcliff and Catherine’s relationship was very strong, she completely forgets about him once Edgar arrives. Catherine expects everybody to do what she says, and becomes hysterical when people do not.

She pinches Nelly in a fit of passion, which shows her instability as a character.

Heathcliff as a Villain

Heathcliff purposely influences Hareton, who was at the time a young child, to hate his father. His negative affect on Hareton causes him to curse, and to tell people that his father Hindley is the devil. Heathcliff marries Isabella in order to hurt her brother, and treats her very poorly. He also hangs her dog for no reason other than to hurt anything associated with the Lintons (except Catherine, of course). This brutality shows how strong Heathcliff’s hatred truly was, and shows his willingness to hurt innocent people for revenge. He takes custody of Linton, who is terrified of his father. He is constantly weak, sick, and Heathcliff uses him to secure his fortune at Thrushcross Grange.

He bribes young Cathy into marrying Linton, telling her she would not be able to see her dying father unless she did. Heathcliff knew that Cathy loved her father, but held her hostage until he had gotten what he had wanted. This displays how truly selfish he was, and to what extremes he would undergo in order to achieve his goals.

Because of Heathcliff’s experiences as a victim, he became stronger and more determined to achieve his goals. However, no person has the right to express their anger on other innocent people, which is exactly what Heathcliff did. At first, we felt sympathy for his lack of luck in the first part of the novel. In the second half, we truly see what a horrible character he turns out to be. 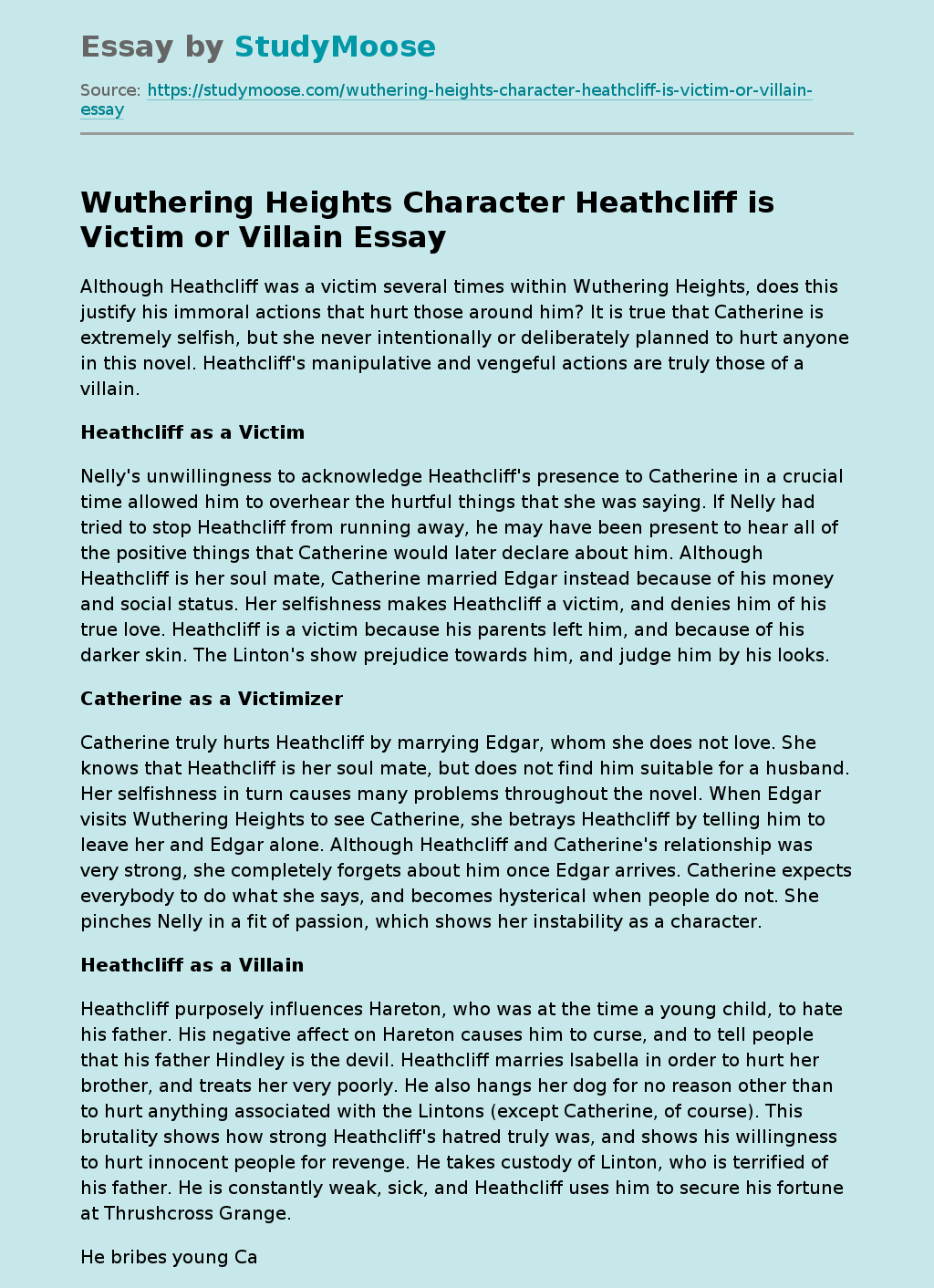