Emily Bronte’s Wuthering Heights is a romantic, tragedy novel compact with passionate love between two main, complex characters, Cathy Earnshaw and Heathcliff. Being set against the backdrop of the Yorkshire moors, the environment and location prepares the audience of what the characters may be like, giving a first impression of laid back people living in the countryside. However further events and descriptions take place to advise the actual personality, and life style the characters inhabit upon.

Emily Bronte, the contemplative Author of Wuthering Heights, was born on the 30th July 1818, in Bradford of Yorkshire.

However shortly at the age of 2 moved to Haworth near Keighley, Yorkshire. Emily began to write the spectacular novel during the years of 1946/47, to be published in December 1847 under the pseudonym of Ellis Bell. Emily Bronte’s life came to an abrupt end when she died of tuberculosis, at the age of 30, on the 19th December 1848. Only after her death, did Wuthering Heights give Emily Bronte recognition for the enthralling novel, when Thomas Cautley Newby quite rightly published it under her name.

The opening 3 chapters produce a very powerful view on Wuthering Heights, also the main characters, plus brief descriptions of things from Mr Lockwood, him being the narrator, at the beginning of the story.

The description of Wuthering Heights given from the view point of Lockwood, quoting… ‘Wuthering Heights is the name of Mr Heathcliff’s dwelling. ‘Wuthering’ being a significant provincial adjective, descriptive of the atmospheric tumult to which its station is exposed in stormy weather.

’ This gives a gentle feel of a gothic genre, with the way he describes Wuthering Heights being the name of Mr Heathcliff’s dwelling, and linking it alongside the stormy weather.

Lockwood gives a brief account on Heathcliff’s personality, the first being short-lived as he quotes him as a ‘capital fellow’. Shortly after Lockwood states … ‘I no longer felt inclined to call Heathcliff a ‘capital fellow”. This is as a consequence of a string of expressions given by Heathcliff to Lockwood, as he clearly shows his depression about Lockwood’s second visit to Wuthering Heights. Another matter which triggers the quotation by Lockwood is the manner in which Heathcliff treats Zillah, who Lockwood portrays as a stout housewife.

Lockwood’s second visit to Wuthering Heights from Thrush cross grange is an extremely important feature to the novel. We find out quite a lot about Catherine Earnshaw, and the books she composed, which are discovered by Lockwood as he is sheltered for the night because of the disastrous weather conditions, enforcing Heathcliff to put him up for the night. The readers learn Catherine is a complex character, because of her use of 3 different names, each printed on the cover of different books. The names exploited by Catherine are Catherine Earnshaw, Catherine Heathcliff plus finally Catherine Linton.

The reader would get the impression that Lockwood is a very trust-worthy man, who altogether fits the role to be narrator for the opening chapters, to familiarize the audience with the setting, plus the characters of the novel. The audience would agree with Lockwood’s changed thoughts on Heathcliff, with how he can not put him in an appearance as a ‘capital fellow’ to other outsiders. . The reason behind this is the lack of respect in which he has for others in the way he talks to them, acts to them, overall the way in which he treats other characters. He does this in a sort of manner that he is a much higher privilege in society to others, so he can treat them in a way which suits him more.

An example of this is when Hareton offers to guide Lockwood to the gates of Wuthering Heights, to set him on his journey home in the horrendous conditions, however Heathcliff quotes… ‘You’ll go with him to hell’. This speech is totally un-called for, as Hareton is only trying to be sympathetic to Lockwood who is in a position in which he has to find a way home in devastating circumstances. With Lockwood also being an outsider to Wuthering Heights, the readers can acknowledge, as it would be to them, it is Lockwood’s first view on events and surroundings.

Overall the opening 3 chapters are so effective because they give a vivid image of a dysfunctional family group, which invites the reader to read on to see what events are forthcoming for the family, beyond the opening chapters. 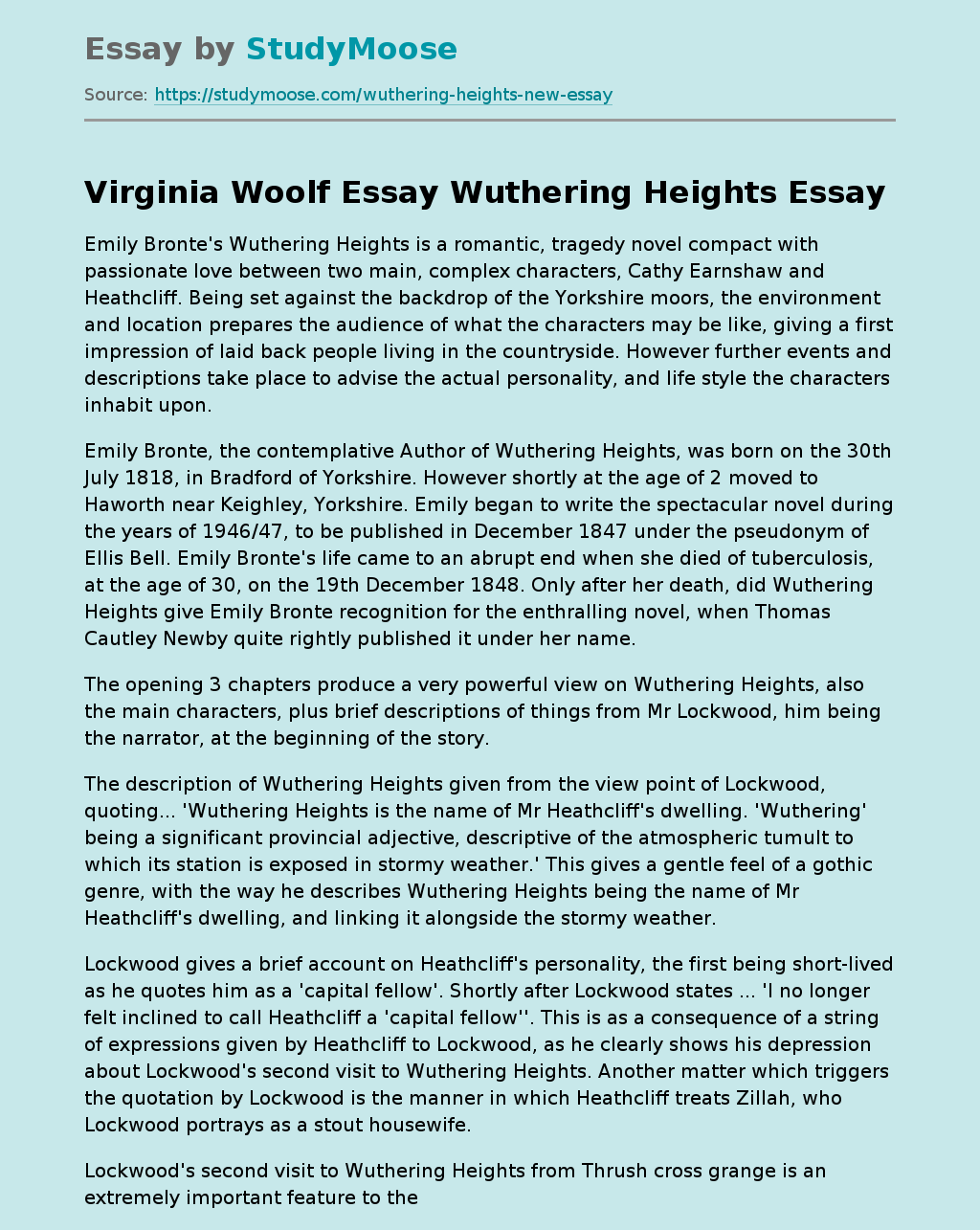