The definition of violence can surely be varied, but the violence presented in Wuthering Heights can be mainly categorized into physical and verbal forms of abuses. Though there are general causes for the prevalence of violence in its characters, each of them, with respective motives, adopts, in some cases, vastly different brutal behaviours towards others. This asserts substantial impacts on the book’s plots, characters’ disposition developments (mostly malignant), and moral values. Yet still, apart from violence itself, (many may wonder why) the tolerance of it is not less common in the novel.

Don't use plagiarized sources. Get your custom essay on
“ “Wuthering Heights” by Emily Bronte: Violence ”
Get custom paper
NEW! smart matching with writer

The fact that violence being a quality commonly found in the characters of Wuthering Heights is not without reasons. Nurture of characters, plays a large part among these causes. Though not exactly bred, some characters are influenced to be violent throughout their childhoods. Significant examples include Catherine Earnshaw and Heathcliff, who are both influenced by Hindley’s poor role modeling, causing the former to adopt both verbal & physical violence towards her beloved, and the former to take his revenge with treachery and violence.

Some of them are indulged to be violent, and Hindley is certainly one of them. With Mr Earnshaw’s ignorance and also after his death, Hindley employs constant, both verbal and physical maltreatment towards Heathcliff. Yet the reason of which would be further discussed later.

The atmosphere of the Yorkshire moor, where Wuthering Heights is set in, is also noted to cultivate characters’ violent side of their personalities. The surroundings of the Heights are bleak and windy, causing it a probable contribution to the violent quality of characters.

In the very first chapter we know from Lockwood, that Wuthering Heights itself is stocked with ‘pistols’ and ‘guns’. Though not apparently discussed, the atmospheric influence on characters can be proved by changes shown in Lockwood and Catherine Linton ever since their stay in the Heights. While Catherine ‘feel and see only death’, Lockwood does evince an inclination to be violent in his confrontation with the child desiring access through the window – he’ pulled its wrist on to the broken pane’, suggesting the existence of a tendency of violence in even the most loving or civilized people with proper nourishment.

Various characters have adopted beastly treatments towards others for their specific motives, too. For example, Heathcliff, who does so mainly for satisfying his own hatred and attaining revenge, asserts remarkable sufferings on characters such as Isabella, Cathy, Linton and Edgar.

Heathcliff once implied that his motive in marrying Isabella is to revenge against Catherine and Edgar – ‘The tyrant grinds down his slaves and they crush those beneath them’ He indeed succeeds by using violence – Heathcliff smacks and throws knife at Isabella, he even hangs Isabella’s dog, Fanny. He is also verbally violent towards her wife, calling her ‘a wicked slut’. To strengthen his claim of the Grange, he thrashes his son to pair him and Catherine Linton.

To fulfill his aversion to him, Heathcliff calls Linton with humiliating epithets such as ‘cobweb’. On the other hand, we can say that Heathcliff treats Catherine Linton and Edgar with violence merely for his enjoyment of their sufferings – ‘I shall enjoy myself remarkably in thinking your father will be miserable; I shall not sleep for satisfaction’ He, early in the novel, throws hot sauce over Edgar. He then slaps and strikes Catherine later, as Linton recalls – ‘[Catherine] showed me her cheek cut on the inside…her mouth filled with blood’

Another violent character is Hindley. He, to be more accurate, asserts brutality on Heathcliff out of jealousy apart from hatred. He sees Heathcliff as an ‘usurper’ of his position in the family. Hindley once throws an iron weight at Heathcliff, and calls him a ‘beggarly interloper’. We must also note that Catherine once observes Hindley’s conduct towards Heathcliff as atrocious. He gives him constant thrashings and locks him up at the Christmas ball, instilling hatred in Heathcliff, which later develops into a cause for his violence. This, ironically, echoes to Hindley’s view, that violence is a return for violence.

In the discussion of violence, the old and the young Catherine, Edgar and Isabella may not be the major characters concerned. Yet hey have been, though not significantly, violent or somewhat succumbed to violence. Catherine once pinches Nelly, out of her dissatisfaction of whose ‘snoopiness’ (to tell Edgar more about her). While Isabella, half out of abhorrence and half helplessness, has not stopped the struggle between Heathcliff and Hindley, and taunts Heathcliff, Catherine and Edgar Linton’s employment of ‘violence’, I believe, is driven by solely desperation. The former bites Heathcliff to free herself, and the former, forced by her wife, ‘struck him [Heathcliff] full’

The importance of violence in the novel is evident. Firstly, it moulds characters’ dispositions. Hindley’s brutalizing Heathcliff paves Heathcliff’s way to becoming a ‘devil’, as Nelly remarks, ‘his treatment of the latter [Heathcliff] is enough to make a fiend out of a saint’ Heathcliff’s ‘crushing’ other characters also produces victimizing effects on them. Linton is made to made to feel Heathcliff’s presence ‘as potent on his nerves, as a ghost’, and Catherine is deprived of her originally cheerful and carefree state of mind, and turned ‘distraught’. Isabella is changed to hopeless and hateful.

Even though with these profoundly adverse effects, violence is indulged invariably in the novel. In fact, the lack of a halt to the repeating violent scenes is mainly due to the prevalence of violence in characters. As discussed, early every character in Wuthering Heights has been violent, and the fact makes it difficult for them to aware of their error in being violent. Lockwood once remarks, correspondingly, that ‘it is strange how custom can mould our taste and ideas’ Most characters’ consciences are blinded by the fact that violent behaviours are common. Even when some characters notice that ‘violence is wrong’, their inability to stop the violence disable them from correcting the mistake. For example, Isabella, though knowing that Heathcliff should not beat her, has no power to avoid her abuse by him, and thus chooses to leave him, leaving others in the Heights to be victimized.

Distressing the effects of violence may be, but violent aspects of Emily Bronte’s characters are not merely created to add to the miseries of them. Like many of the other themes of book, these different forms of violence help present us a ‘moral message’. Thus, I am convinced that it is not correct to say that Wuthering Heights is book lacking of ‘moral’, by several hints. One of which is more noticeable – Isabella’s expression of her own belief, that ‘treachery and violence, are spears pointed at both ends – they would those who resort to them, worse than their enemies’. To see if this is apt to be Emily Bronte’s own view on violence, we may find read in the light of the fates of characters.

Heathcliff, who intends to hurt mainly Edgar by injuring young Catherine, dies in a seemly excitement and unrest, while Edgar, who is meant to be hurt, dies in peace. Catherine Linton, the very victim of his violence, recovers and at last acquires a happy marriage with Hareton. Heathcliff himself, surprisingly, on the verge of death, wonders why he has lost the desire to destroy, and eventually dies, not without puzzlement. These curiously enough, provide sufficient evidence to the presence of an anti-violence-message in the novel.

All in all, the recurring scenes of violence can be attributed to general causes and respective motives of characters. Nearly every character in Wuthering Heights has been violent or inclined to be violent. Such behaviours are often indulged because of the dominance of brutality in characters’ personalities and their inability to stop violence. As for importance, violence plays a role in influencing the dispositions of the novel characters and presenting its moral as a piece of literature. 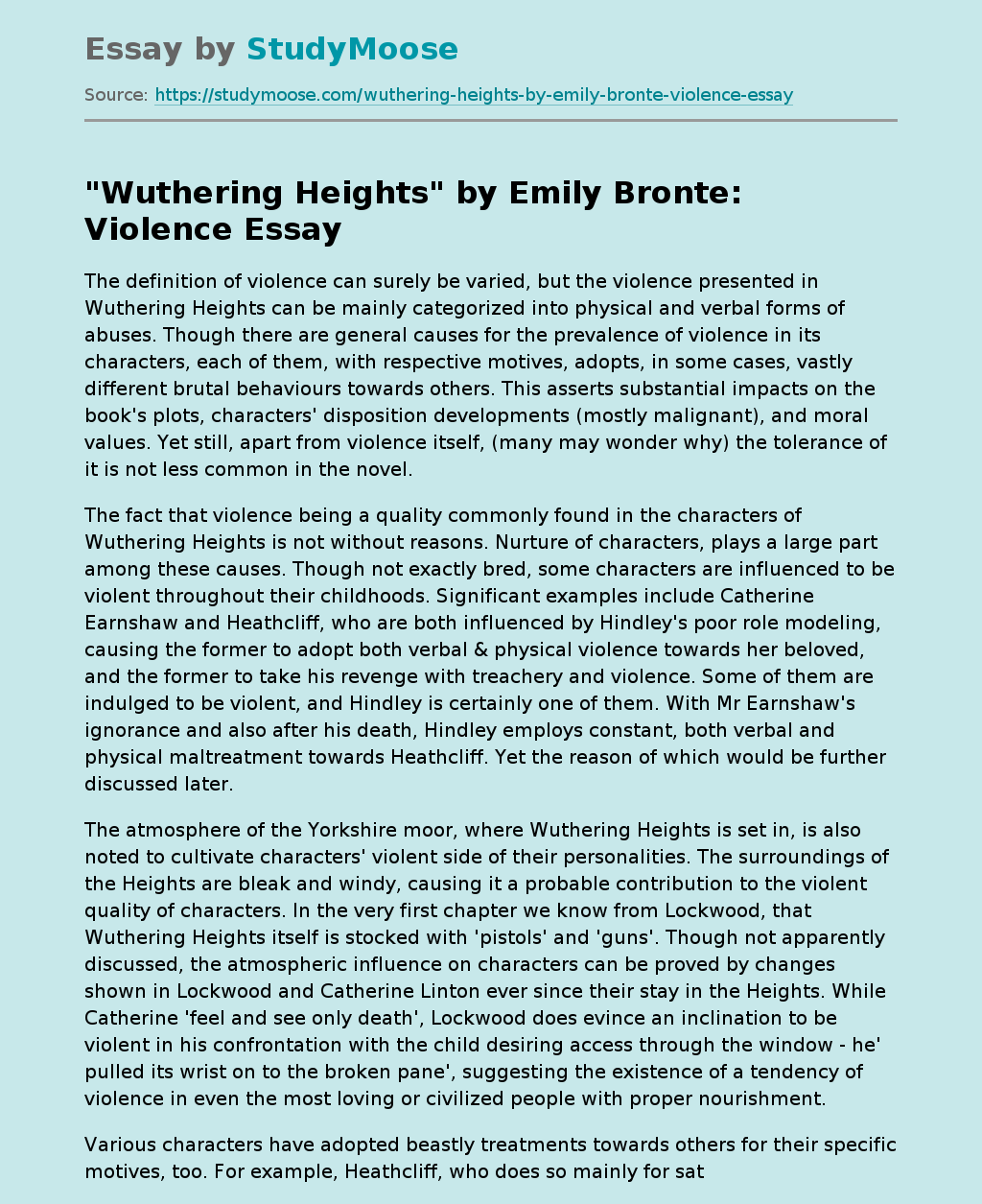