The Reasons for Heathcliff’s Immoral Behavior

“Gift of God”(35). Mr. Earnshaw used this line to describe Heathcliff when he first brought him home. It is a common belief shared by many cultures, that children come into this world being pure and innocent thus, it is their surrounding in which they grow up that shapes their personality. This is what happened to Heathcliff. How could an innocent child turn into an immoral monster? Throughout the novel Wuthering Heights we witness Heathcliff committing acts of pure hatred and neglect.

Don't use plagiarized sources. Get your custom essay on
“ The Reasons for Heathcliff’s Immoral Behavior ”
Get custom paper
NEW! smart matching with writer

However, his acts should only be judged from the prospective of the circumstances that influenced his character, which are horrible childhood, constant mistreatment by others, and the betrayal of the true love of his life. Throughout his life on the level of his subconscious he kept feeling that he was being oppressed by the paradigm of the society.

Heathcliff’s nasty behavior exhibited towards many other characters appearing in the book may be interpreted as an anxiety he kept experiencing throughout his life as a result horrible childhood.

His relationship with his step mother could never be described as a normal and standard relationship of a mother and son, he was rather hated by her. Within the adoptive family he found little to no understanding and love and encountered bullying by his brother Hindley. The only two people who had any kind of warm feelings for him were Mr. Earnshaw and Catherine, who even fell in love with him. Even though he was treated badly, he was a “patient child”(37), he was not a complainer and took without resentment everything that was happening in his life.

Even when all the children had measles and he had it the worst, he was “as uncomplaining as a lamb”(37) and the “quietest child that ever nurse watched over”(37).

As Mr. Earnshaw passed away and Hindley became the man of the house, the social status of Heathcliff’s within the family dropped even more, as he started being treated like a free servant and was forced to stay home and not go to school. This hardship resulted in gradual change of the Heathcliff’s behavior. This resulted in a projection of troubled childhood into parenthood, stimulating improper relationship between Heathcliff and his child Linton. As Heathcliff never resolved his issues from the past and was still emotionally trapped in the misery of his childhood, this protruded in an attitude towards other people and his sometimes inhumane treatment by him. This is why, without as sense of regret he trapped physically his wife Isobel in Wuthering Heights, while on the emotional level he managed to trap Catherine in making the decision of when she was choosing between him and Edgar. Although Catherine officially chose his challenger, she never got out of chain of emotional attachment to Heathcliff. Hence, it can be concluded that the events of Heathcliff’s childhood greatly affected his behavior as an adult.

Maybe Heathcliff’s childhood could have been different if not for the fact that he was quite different and unique. His physical appearance was contrasting from an average Englishman, for he looked like a gypsy. With his looks it was very hard from the start to fit in the community with very old and conservative views. The traditionalism of people surrounding him, not only in the house where he lived, but also in the village, prevented him from integrating into that society, which in a way caused him an emotional trauma. Heathcliff was “dirty, ragged, black-haired child”(35) , which resulted in him being misjudged and mistreated. Nelly for example, had always been “frightened” (35) and even Catherine, who became the love of his life, in the beginning spat “at the stupid little thing”(36). Mrs. Earnshaw at the first encounter with him even called him a “gipsy brat”(36) and “was ready to fling it out of doors”(36).

All these things impacted his perception of the world and people. However, it was not only his physical appearance that prevented him from becoming an integral part of the community around, but it was again the community itself, that prevented him from fully entering it due to the disgust by the fact that he was a bastard. It was a very painful situation for Heathcliff. His heart was becoming less and less soft and more of density of a rock, as each time people looked down upon him. If childhood was over at some point, and he probably could get over the mistreatment he suffered as a child, feeling as “the other” in the community, could never be overcome, for it was not only him unwilling to change, it was the society in general not ready to accept him.

Throughout of years of bulling and misunderstanding, one of the things that still kept him human was pure love for Catherine. Even that was crushed, as Catherine, the only woman he had ever loved, betrayed him. He saw her as the only person he truly connected with. Catherine also felt the same way about him and even mentioned, “Whatever our souls are made of, his and mine are the same” (78) . It was obvious throughout the novel that Catherine and Heathcliff were never going to get married, but he always had a hope of being together with her. Catherine was an adventurous person, not even afraid to go against her brother Hindley. She would disobey him quite frequently. However Catherine was faced with a difficult decision to make: she had either to marry Edgar, the man she didn’t love, and uplift her social status, or marry Heathcliff, the man she loved and move down the social ladder, as she said that would “degraded me to marry Heathcliff now” (78) . She chose the first, which broke Heathcliff’s heart, and changed him forever for the worst. For him it was a stab in the back that scarred his heart permanently. After that, obviously, very little room for morality was left in him. Thus this contributed to his actions becoming devious, evil, malicious, and cold hearted.

As many deeds of Heathcliff throughout the novel can be categorized as immoral, and the general public perceives him as an evil mastermind, still the readers must try to fit his shoes at least for a moment and try to see through his eyes, as his outlook was deeply affected by many things, sometimes quite ugly, that he went through in his life. Therefore, one should not judge the character of Heathcliff without referring to his childhood, without taking into consideration the attitude of others that he had lived with his entire life and without feeling the pain of losing the only love he had ever had. In some ways Catherine, Hindley, and Mrs. Earnshaw are the true villains in the novel because their actions shaped and molded Heathcliff into the person he became. Hence, maybe if he grew up in a different society and a household with different values and attitudes, the story would have been completely different.

The Reasons for Heathcliff’s Immoral Behavior. (2020, Jun 02). Retrieved from https://studymoose.com/reasons-heathcliffs-immoral-behavior-new-essay 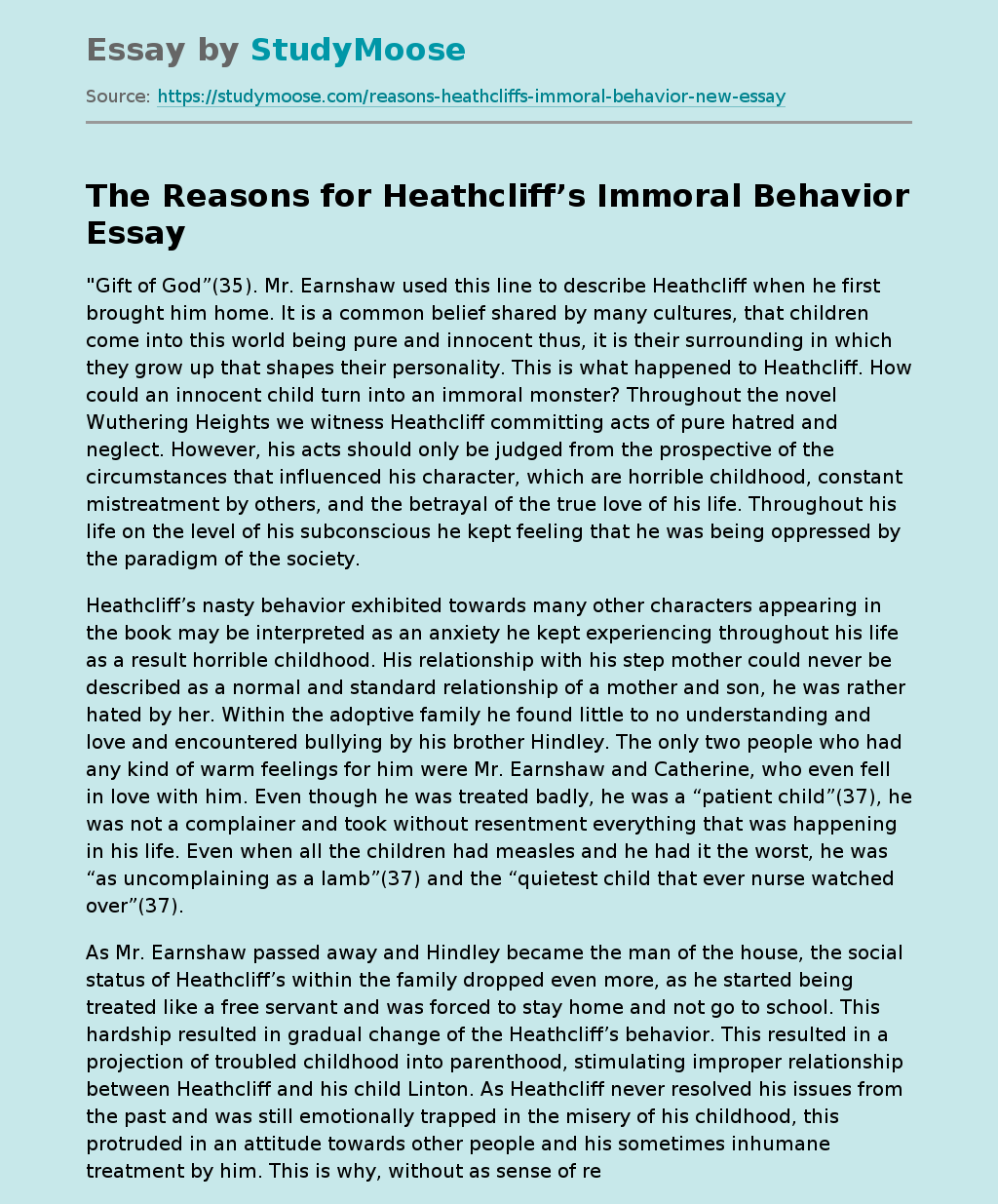