Beatrice in Shakespeare's Play Much Ado About Nothing

Throughout the play, Beatrice is the typical feisty, fun-loving woman. However, 3;1 reveals a different side to her, as we are shown mainly through the eyes of Hero. Defying all sense of friendliness, Hero describes Beatrice as ‘self-centred’. This is full of negativity. Although it is for Beatrice’s benefit that Hero and Ursula are tricking the couple, the description comes as a surprise contrast to the nature of the play, and also the plot of the scene.

The play is a comedy, and should be full of pleasant words and funny actions.

Don't use plagiarized sources. Get your custom essay on
“ Beatrice in Shakespeare’s Play Much Ado About Nothing ”
Get custom paper
NEW! smart matching with writer

In this scene, in which Ursula and Hero are wanting to do good for Beatrice, Shakespeare’s use of blatant negativity in Hero’s words conveys a stark contrast to the supposedly friendly and light-hearted relationships between the characters. Furthermore, as the plan involving Beatrice develops, Hero gives up on Beatrice.

She says how Benedick will ‘consume away’ and ‘waste inwardly’ if he is to love Beatrice. Hero seemingly wants to hand Beatrice over to Benedick, and get rid of her.

Again, Shakespeare’s use of negative language defies all sense of the play being a sole comedy. Hero is describing the state Benedick will be in once he falls in love with Beatrice, and words such as ‘consume away’ and ‘waste inwardly’ do not depict the typical image of a person in love. 3;1 is not all tragic however. The scene is, in actual fact, a main part of the gull, and the actions of the characters provide humour.

In one part, humour is conveyed via the use of animal imagery. Before coming into clear sight where Beatrice can hear Hero and Ursula’s conversation, Hero orders Ursula to look where Beatrice ‘like a lapwing runs’.

Typically, a lapwing makes short bursts of rapid running, then stops short to look ad listen. Although it is only something Hero has said, the image of Beatrice running like a lapwing is enough to make the audience laugh. It almost foreshadows the coming scene, in which Beatrice does in fact listen and believe the trickery that is in fact Hero and Ursula’s craftsmanship. Throughout the play, Beatrice is the brash, female character, and the use of this description-although comedic-is not misplaced. Shakespeare’s use of juxtaposition, in placing both gulling scenes one after another, allows the audience to easily spot and understand the difference between the characters of both Benedick and Beatrice. Once he finds that Beatrice is supposedly ‘in love with him’, he replies in a comical and proud manner.

Through the use of visual gag, involving Benedick jumping around with a grin on his face (as seen in Branagh’s interpretation of the play), the audience can easily tell how smug Benedick actually is. However, Beatrice’s reactions are the polar opposite. Instead of reacting in ways similar to Benedick, she takes a turn into self-improvement. Dismayed by people’s apparent ‘dislike’ for her character and once finding out that Benedick is said to be in love with her, she decides to change herself. Her reply to this is in poetic form. Her use of language is much more eloquent than that of Benedick’s. She is also not as smug as him. In fact, she does not seem smug at all.

Beatrice in Shakespeare's Play Much Ado About Nothing. (2016, May 30). Retrieved from http://studymoose.com/beatrice-in-shakespeares-play-much-ado-about-nothing-essay 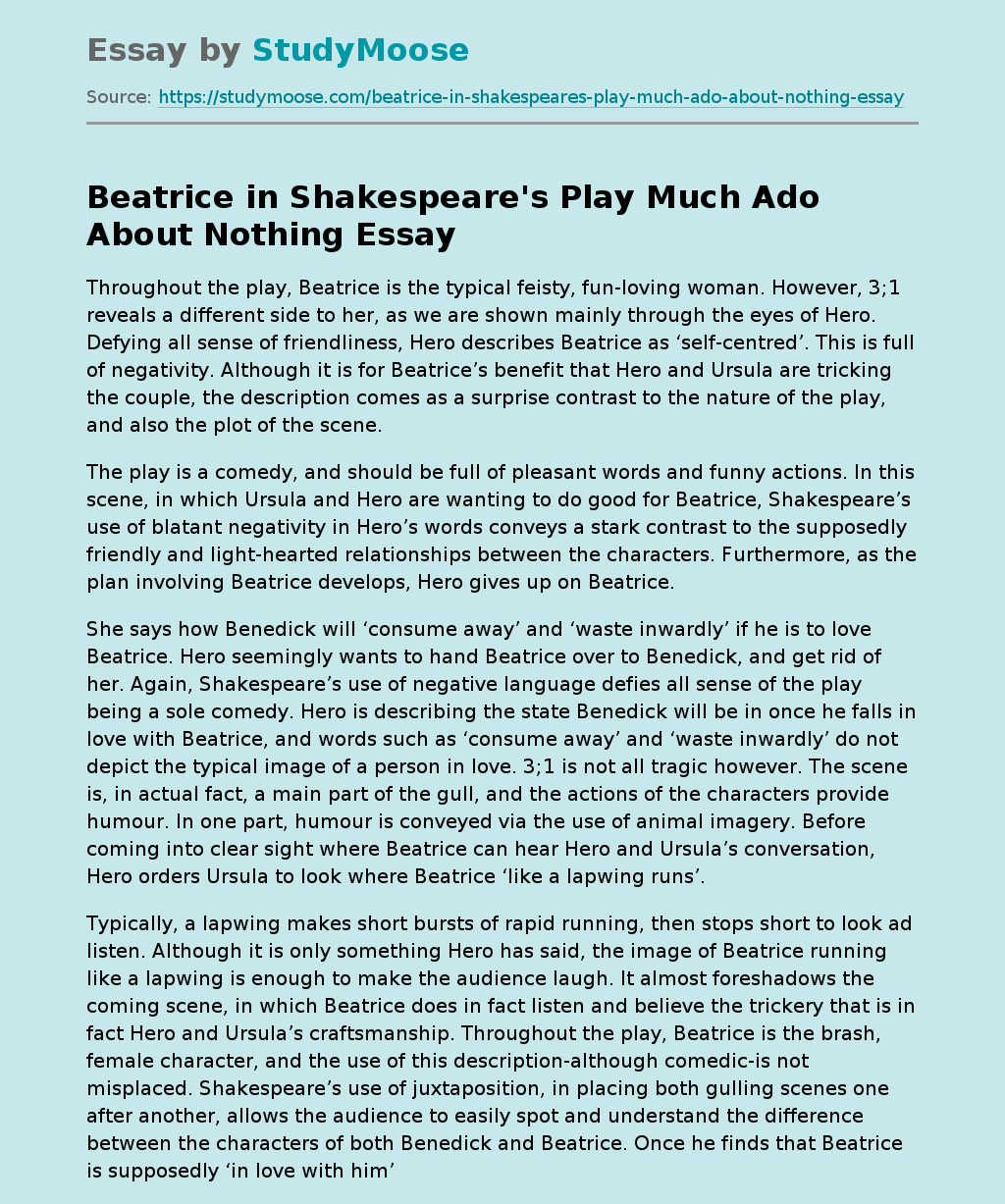