Satisfactory Conclusion to Much Ado About Nothing

Look again at Act V Scene 4. To what extent do you find it a satisfactory conclusion to the play?

Act V Scene 4 is a satisfactory conclusion to the play Much Ado About Nothing because it includes certain conventions of comedy; an example being the happy ending when Hero and Claudio are reunited and Benedick and Beatrice’s love is made public.

There is dramatic irony within this scene as deception is used as Hero pretends to be her ‘cousin’, which creates tension as the audience wonder whether this deception will have positive or negative effect on the play or it is this which will lead to the inevitability of a requilibrium ending – it is an inevitability because Much Ado About Nothing is a Shakespearean comedy and these have a happy ending.

Don't use plagiarized sources.
Get Your Custom Essay on Satisfactory Conclusion to Much Ado About Nothing Just from $13,9/Page

This contributes to a satisfactory conclusion to the play because of the tension the deception causes.

Shakespeare created the character of Beatrice to put forth his view that he did not agree with the patriarchal society within the Elizabethan period.

He felt they should have had more power, which Beatrice shows with her fiery attitude and her personality being the complete opposite of the stereotypical Elizabethan woman, which is shown through Hero’s willingness to do as the men order her to – including deceiving Claudio when marrying him as her ‘cousin’. Shakespeare is showing his feminist view that women should be capable to do what they will without a man’s consent, which wasn’t the case at this time

However, the character of Beatrice might have offended Shakespeare’s audience so when she conforms to society’s and women’s norms of the Elizabethan period, it make Much Ado About Nothing possess a satisfactory conclusion. She does this by marrying Benedick, ‘since I do purpose to marry’. This means Beatrice has changed her feminist ways and has joined the women in the play, such as Hero, in becoming a stereotypical Elizabethan dependent woman. This makes Act V Scene 4 a satisfactory conclusion to the Shakespearean audience because it doesn’t contradict the norms of the female roles in society at the time. However, in modern society, this may not be an adequate conclusion as the character of Beatrice has been seen of showing weakness to her independence when it is acceptable for women to not marry until much later in life (which isn’t the case in the Elizabethan period), so with Beatrice conforming to expectations doesn’t make this an adequate ending in today’s society.

There is poetic justice within this scene, which also makes it a satisfactory conclusion. ‘Did I not tell you she was innocent?’ and ‘your brother John is ta’en in flight, And brought with armed men back to Messina’ are bother examples of poetic justice. Hero’s innocence has been reclaimed, as her father now believes the truth that Claudio and Don Pedro have been deceived. It starts the end of the play because it is restoring the biggest lies to the truth showing the harmony that must be returned onto stage in a comedy. The sense of peotic justice is also when Don John is caputed after he flees from Messina knowing his villainy actions were going to be discovered. With him being caught by ‘armed men’ the audience knows that every wrong within Much Ado About Nothing has been righted and this creates a satisfactory conclusion to the play.

Act V Scene 4 of Much Ado About Nothing creates a satisfactory conclusion to an Elizabethan audience as it offers poetic justice and harmony brought back to the stage as well as all the characters conforming to what is normal in the Elizabethan period.

Satisfactory Conclusion to Much Ado About Nothing. (2016, Jun 07). Retrieved from https://studymoose.com/satisfactory-conclusion-to-much-ado-about-nothing-essay 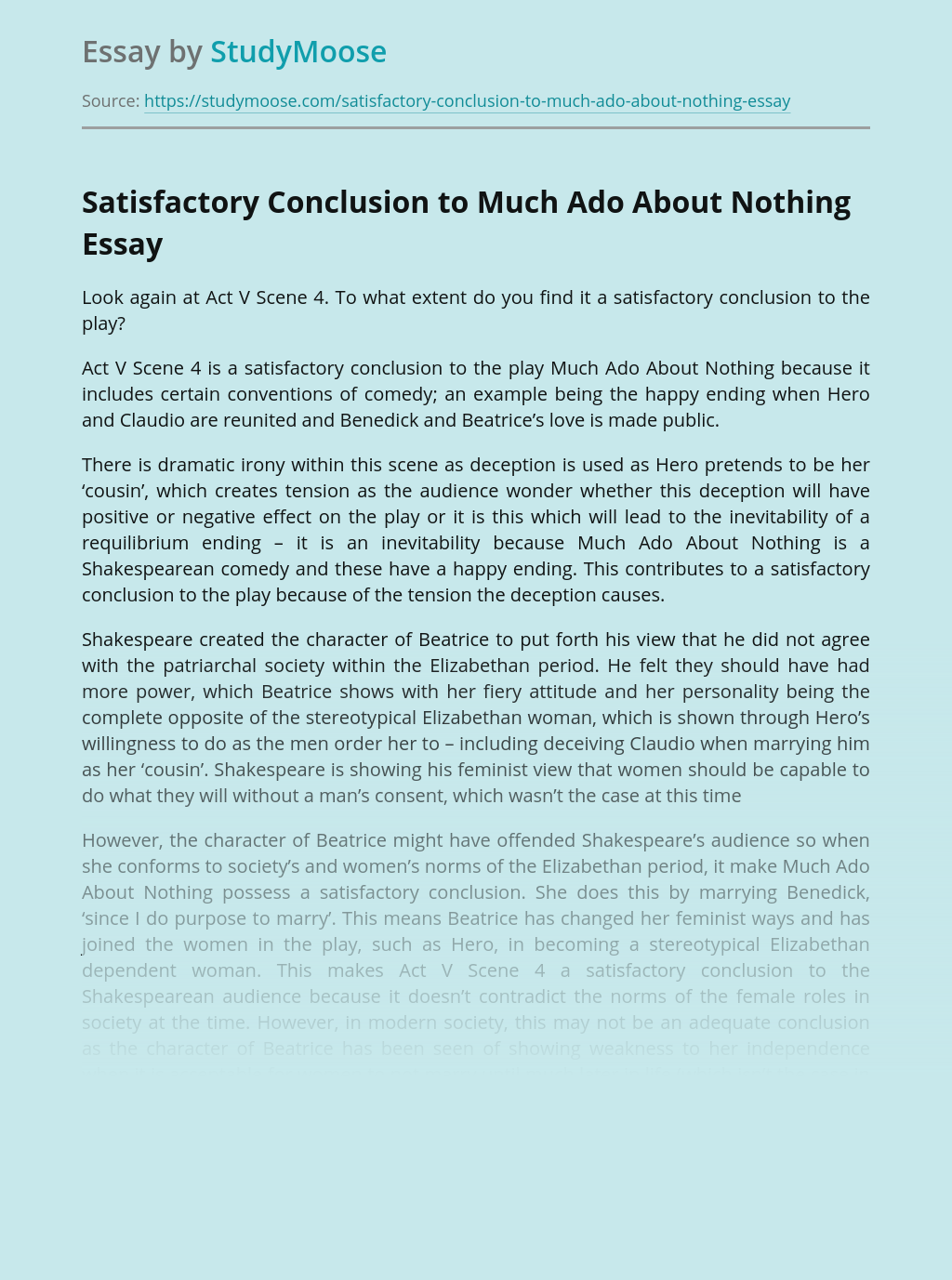 One may ask whether or not the scriptwriters or directors of the movies to be mentioned in this paper were able to actually read the Divine comedy; or perhaps the depiction of Heaven, hell, and the purgatory made my Dante was simply so vivid that it has become a staple of the mainstream literary views...

Satisfactory Conclusion to Much Ado About Nothing

Get Essay
﻿Merchant of Venice- Romantic Comedy or not?

A romantic comedy is a play that integrates romantic elements as well as humour. In Shakespeare’s romantic comedies, the protagonists live happily ever after, and more often than not, the play ends with the tolling of wedding bells, with more than one couple getting married to create a joyful atmosphere. Love always seems to triumph...

Importance Of Laughter In Life for Me

Laughter is a positive emotion that is triggered by a joke, being tickled, seeing funny appearances or physical actions, hearing funny voices and seeing various facial expressions. Laughter gets rid of all your stress hormones. Furthermore humour can be developed over time. When I was younger, I found many various things funny. Sponge bob, in...

Disastrous Date or a Funny Incident

3 years ago my buddy set me up on an arranged date, but prior to going on the date I desired to be familiar with my possible date. After speaking with him for a couple of weeks and being familiar with him we finally decided to have our first date. He was a gentleman he...