1) Strategy, culture, strength and weakness. Volume up and the price down is the key strategy at TI over the years. TI’s organizational culture can be summed by a “Do it ourselves” approach. TI is run by engineers for engineers. The company prefers to hire straight out of college and incentivizes employees with salaries and tenures in addition to a company culture that rarely fires. By this, TI cultivates loyal and more importantly proud employees. It is no surprise therefore that there is an almost obsessive dislike of other company’s products.

TI’s culture both its strength and weakness as it was a source for breakthrough innovation whilst at the same time arrogance and corporate hubris which eventually tempered with their success. TI didn’t just want to be competitive in the markets it entered; it wanted to dominate them (hubris).

TI believed that by introducing the 9900 microprocessor they could make competition (Intel being one of them) obsolete and become the new marketplace standard. This is a reflection of TI hubris.

. TI neglected to take into their consideration both cost and suitability of the processor to this target audience.

In terms of cost, this meant a higher cost to the consumer division than basing it on the more popular 8-bit micro-processors, which would in turn roll over to a higher cost to end consumer and thus making the computer less attractive to the “every-man”. In terms of suitability, the 9900 microprocessor was originally designed for industrial use and did not adapt well to a consumer system.

4) Marketing processes of the 99/4A computer and mistakes done by TI. I will analyze this with the four main P’s of marketing, People, Product, Price and Place. People; although the initial strategy was to target the computer to three segments, two projects were killed in the making and TI was left with one market segment which was the personal computer or home computer. Product was the 99/4A computer, with a 16-bit (9900) processor. Place: retails stores. The original marketing manager, turner, believed that it isn’t possible to sell a computer in a computer store and therefore decided on distributing the product in retail stores and invested a lot of time and resource in building this distribution network.

Price: the original price was $550 and brought down to $375. The initial price was the acceptable and almost standard price for a personal/home computer at the time (in comparison to competitor products). The decrease in price was a decision based on Turner’s belief that if the price was low enough, it wouldn’t matter to the consumer that this product was more toy than tool as well as his wild sale projection.

When the commodore computer came out, Tuner decided on a “price war” strategy, as we can see again, in line with TI’s hubris culture that didn’t just want to be competitive in the markets, it wanted to dominate. Instead of explaining what about the product was special, which could have been done by explaining that it had a better processor, better memory (etc), Turner decided to eliminate the competition, commodore Vic 20, through price war. TI made several mistakes along the way. Advancing the technology was no longer enough, you had to be sure that you were advancing in the direction that the market was heading.

We see that the decisions taken by TI were based on where TI themselves thought the technology and market is advancing and not necessarily where the market was heading. Another mistake that TI made was to make it hard for programmers to develop software that would be compatible with their computer. Back then, as it is today, a computer was only as good as its software, and while other computer could benefit a much wider array of software, the TI computer, whilst maybe powerful, was very limited in its offering.

TI was led by the fact that they hated the thought of sharing the lucrative profits of program software and made it purposely hard for third party software companies to write programs to run on their computer. So while software companies could write programs for any computer it was extremely difficult to write for the TI a 5) Could these mistakes be avoided (with respect to answers 2-4) These mistakes could have definitely been avoided, however this would have required TI to change their companies core culture of “doing it ourselves”.

For example, TI could have made it easier for programmers to create software that would be compatible with TI’s computer. Another example would have been to purchase 8-bit processors which would have been cheaper and in accordance to standard market practice at the time (and would also make it compatible with most software). Analyzing the target market segment, “every man”, would have perhaps resulted in insights as per the market demand and needs.

Turner based his decision on price on a belief and not on market research. Perhaps market research could have resulted in an understanding that people would pay a premium for a better product. This could have prevented the price war. Focusing on informative campaigns on the uses of a home computer could have created a community that would have paid a premium for a better product. TI disregarded the market trend and then disregarded their competitive advantage and entered into a war with known results.

They could not compete on price as they used more expensive material. Lastly, I believe that the company culture “by engineers for engineers” had limited TI’s ability to market an innovative product for a market segment who are not engineers. This culture, which created a myopic view, could have been avoided by hiring more marketing people (not only one) for positions on all product life cycle (including design). 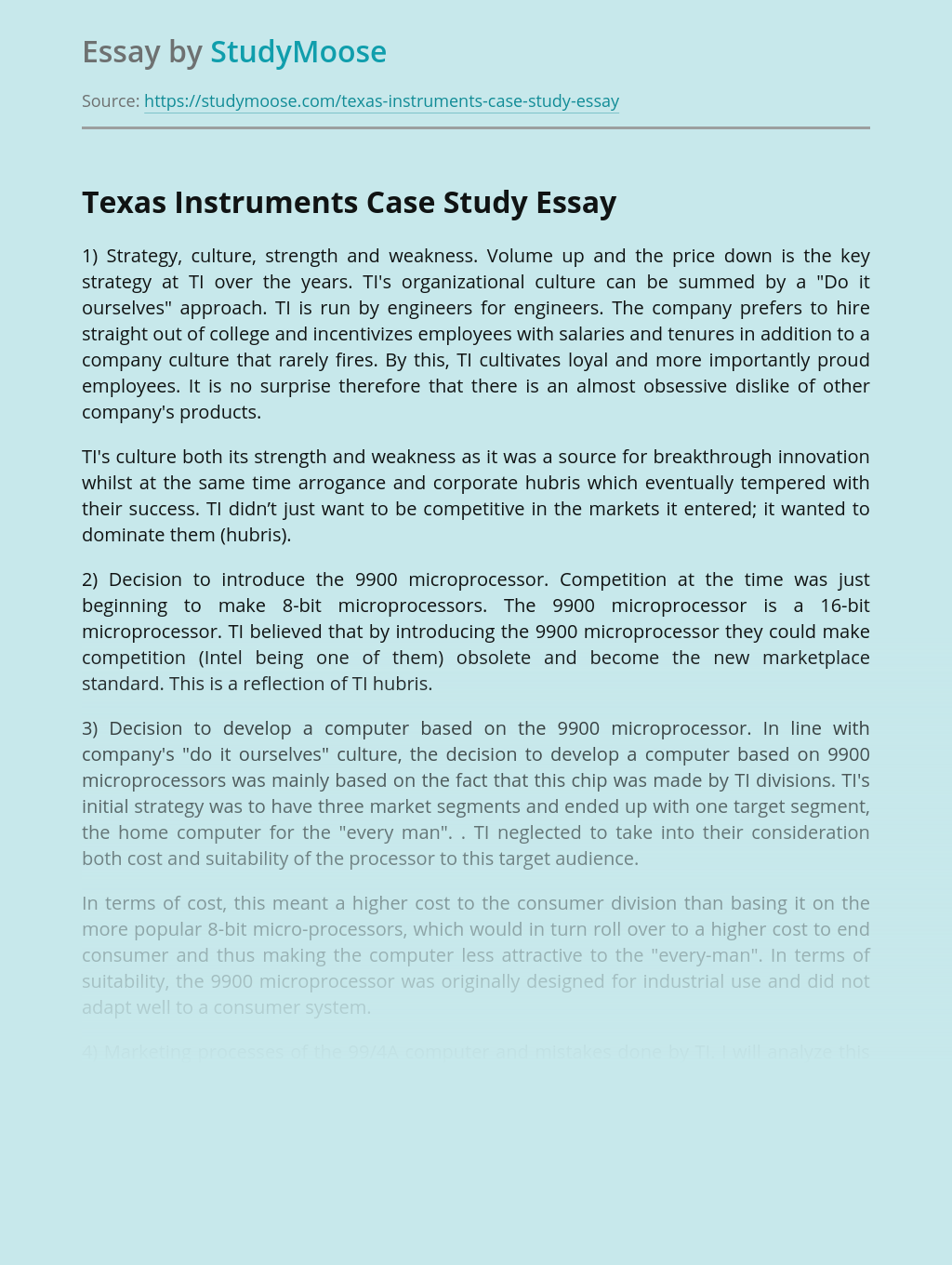