1. Prepare the Report that you feel Amy Shultz should present to Mr.Park.

Don't use plagiarized sources.
Get Your Custom Essay on Pelican Instruments Inc Just from $13,9/Page

For the purpose of this analysis, we take into account different variances within each division,

From the EM side, the General Manager could argue that his business unit must without a doubt follow the strategy of low cost, as he is dealing with a mature product. Because of this, he lowered his selling price compared to his competition by $ 10, resulting in a $ 1.

4MM profit loss. However, he can strengthen his position by saying that thanks to his lower price, he was able to penetrate the market even more, achieving an additional $ 2.6MM in profit from changes in market share. Furthermore, he can argue that the lower price also got him an increase in volume, which earned him $ 679k more in profits. Clearly, the general manager’s decision to lower his selling price was more than beneficial for his business unit.

The Marketing Manager would argue that thanks to his efforts, he was able to go from a 10% market share to a 16% market share, becoming partially responsible for the additional $ 2.6MM in profits. Although industry demand affected the division negatively, losing the division $ 724k, the positive effects of the increased sales were advantageous for the division. Furthermore, the Marketing Manager can say he is partially responsible for the savings in marketing fixed costs for the company, amounting to $ 416k.

The Manufacturing Manager for the division must defend his increase in cost from $ 20 to $ 21. His argument can be perhaps that he was focusing more on quality of product, and that because his product was now of better quality he also is partially responsible for the increase in sales volume. He can also say that he is partially responsible for saving the company $ 342k in fixed manufacturing costs.

From the EI General Manager’s point of view, the fact was that he was able to sell his product at a much higher price, earning his division an additional $ 1.6MM in profits. Although unfortunately he lost $ 689k from a lower sales volume, he clearly made it up to his division by earning them $ 6.9MM from market share changes, and an extra $ 4.9MM from changes in industry demand. As opposed to the EM division, the EI Division strategy must be one that follows differentiation and that focuses on building and penetrating market share in a fast growing industry.

EI’s Marketing Manager can argue that thanks to his efforts, he was able to end the year with a 9% market share. Despite the fact that this is a lower percentage than what was budgeted, the Marketing Manager can argue that the size of the market is growing by the minute, therefore defending his 9% and proving that he earned $ 6.9MM from being able to own a larger piece of the pie (or the market). Because industry demand for the product is also increasing, the product is hot, a factor that also allowed his division to sell above standard prices. Like the EM Marketing Manager, he can finally also argue he is partially responsible for the important savings in fixed marketing expenses.

The Manufacturing Manager for the EI division can claim that like the EM manager, he was also partially responsible for the savings in fixed manufacturing costs. Because his division is focusing on a differentiation strategy, he could claim that the increase in variable cost per unit comes from value-added features that will allow the company to have a better product than its competitors.

3. As Mr. Park, how would you feel about the 1997 performance of each of the six managers who are competing for a share of the bonus pool? Taking into account the fact that the EM business is a “Harvest” business dealing with a mature product, Mr. Park should seriously consider getting rid of the division by slowly discontinuing the product, as it is performing worse than budget and losing $ 4MM in profits for the company as a whole. If Mr. Park decides to maintain the division, the best way for it to compete will be by following a low cost strategy. Based on the characteristics of a “Harvest” business, EM managers should be strictly held to budget, and total compensation should be based more on base salary and less on performance measures.

In analyzing each manager’s performance, Mr. Park should feel positively about granting the bonuses to both the Marketing Manager and the General Manager, but not the Manufacturing Manager, as his variable costs per product increased, going against the low cost strategy discussed. In terms of the EI division, this is a high potential market segment that is growing exponentially and the company is doing well in this business. This division follows a “Build” strategy and therefore he should be more flexible with his managers, acknowledging that their strategy of differentiation and growth is risky. These managers should be evaluated less according to budget and more according to long term criteria such as R&D spending, product development, and market development.

Manager salaries should be more based on performance bonuses and less on base pay so they are more willing to take risks in their strategy. In analyzing each manager’s performance, Mr. Park should feel positively about granting the bonuses to the Marketing Manager, who had a positive variance for the department in terms of market share (aside from industry demand factors). Similarly, the Manufacturing Manager increased his variable costs by a large percent, but this could be defendable from the point of view of creating a better and more differentiated product. However, Mr. Park should feel negatively about the General Manager, since he could have offered the product at a slightly lower price and attained more sales volume and advantages from product mix as well. 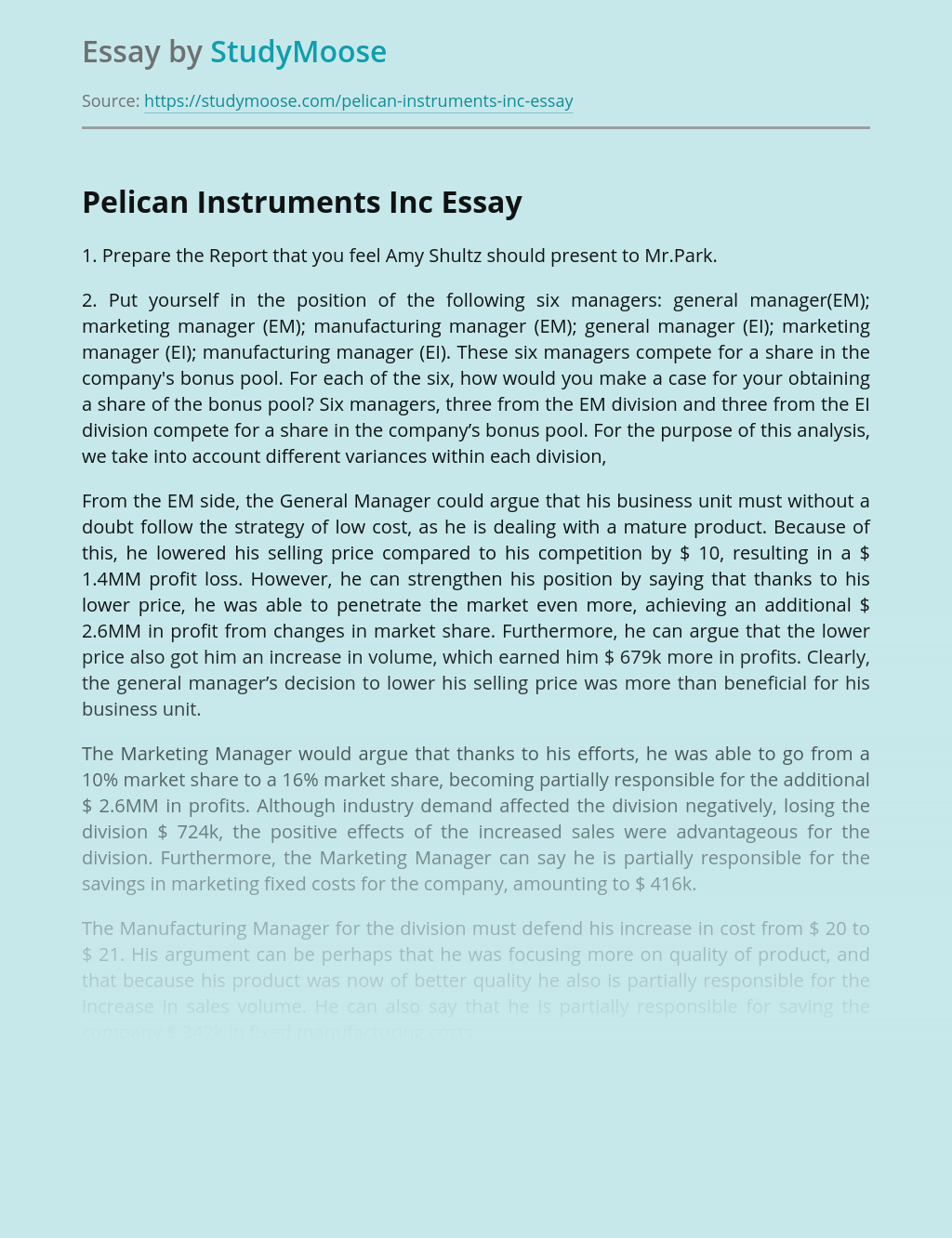 Rate this post There has been much debate within the fashion business about what sort of branding strategy to pursue. With the increasing democratization of fashion ushered in by globalization fashion designers have been able to develop and/or transform their labels to have a strong and tactical world-wide existence. The 2 primary schools of believed...

Rate this post Introduction A universal item code (UPC) can be easily checked out by a laser system scanner, which then can be anticipated as a product as a point-of-sale (POS), hence then permitting a much better account of the services stock. In this case, Alliance Supermarket utilizing both these systems to be able to...

Get Essay
Battle Of The Beers

Rate this post Introduction This case is about the intense battle between beer rivals in the United States, particularly between Anheuser-Busch (A-B), the world’s largest brewer, and SABMiller, the world’s second largest brewer. It discusses about how the companies used advertising in their brand positioning in order to compete with each other and increase the...

Rate this post Definition Advancement or incorporation of characteristics (such as advantages, rate, quality, styling, service, etc.) that a product’s designated customers view to be various and preferable. Advertising and promotion of an item is based upon its separating attributes. Source: http://www.businessdictionary.com/definition/product-differentiation.html Today, the marketplace is crowded with comparable brand names, clamoring for the attention...

Rate this post Paolo de Cesare heads to Japan to make a decision on one of P&G’s most successful and fast growing products – SK-II. SK-II was a high end product that had developed a strong following among Japanese women, who were increasingly conscious about skin care and willing to spend a significant amount of...

Rate this post * History Founded by Frederick W. Smith, FedEx Express was established in 1973 and it has grown quickly. Smith had the idea of producing a business that would deliver mail all over the United States over night. His idea was to fly mail from one location to another in the evening because...

Comparisons Between M&S And Primark Marketing

Rate this post The corporation’s asset all over the history has been the quality of its goods, and regardless of all the problems people still associate the M&S brand with quality. As 87% of customers consider the quality of clothing as important, the company is doing the right thing in emphasizing the quality image of...

Rate this post Sex in advertising has been the theme of much 20th Century American Advertising. It seems like all we see these days are advertisements which use the human body and sexuality to sell all kinds of products from food and cars to colognes and exercise equipment. It is virtually impossible to tune into...