Tesla Motors, Inc is a Palo Alto, CA based company that designs, manufactures, and sells electric luxury cars and electric vehicle powertrain components. These cars are primarily sold in the United States, however they are becoming increasingly popular in the United Kingdom, Ireland, Japan, Hong Kong and Singapore. Currently, Tesla has two models available for purchase, the Roadster and Model S. A third model, Model X, will be available at beginning of 2014. Model S car owners are provided with Supercharger Stations, allowing them to charge their car thus making long distance drives possible.

This service is only offered in the United States, and are in the process of building Supercharger Stations internationally by the end of 2013.

Martin Eberhard and Marc Tarpenning founded Tesla Motors in San Carlos, California on July 2003. However in 2004, Elon Musk joined the team as Chairman of the Board of Directors by investing in the company. Musk, still holds its CEO in addition to a product architect position, becoming the company’s most valuable human capital and visionary.

On June 29, 2010 Tesla Motors was part of NASDAQ under the symbol TSLA and has been the first American car company to go public since Ford Motors in 1956.

Tesla Motor’s main competitors feature BMW, Mercedes, Audi, and Lexus. Although it has been able to stay competitive, Tesla preparing to give new depths to the company by rolling out a new affordable car line in 20172018.

However, they will face the inevitable challenge of designing and massproducing
a budget electric car without brand dilution.

The automotive industry covers a wide range of companies and organizations involved in the design, development, manufacture, marketing, and selling of motor vehicles. It is one of the world’s most important economic sectors by revenue. Tesla Motors falls under the EV niche industry, within the automobile manufacturing industry.

An EV is an automobile that is propelled by one electric motor or more, using electrical energy stored in batteries or another energy storage device. As concerns about the environment rise and the costs of fossil fuels increase, the auto industry, specially the EV industry has taken upon the opportunity to provide alternative solutions to the conventional gas and diesel vehicles. Leading to changes in design to provide cleaner and more energy efficient vehicles. Much of the focus is on electric vehicles (EVs), such as hybrid cars. Hybrids partially run on electric power and currently increasing in popularity among drivers. Yet, attention is now being shifted to plugin

cars, which has reduced the need for fuel.
Five Forces: Electric Car Industry
1.Bargaining Power of Suppliers: HIGH
The bargaining power of suppliers is high based on the fact that the components that go into an EV are specialized. For example, Tesla has over 2,000 auto parts sourced globally, and over 150 suppliers. Panasonic provides Tesla with batteries, and Lotus Cars Limited with Tesla’s Roadster chassis and engineering.

2. Bargaining Power of Customers: LOW
The bargaining power of customers is low in the industry of EVs due to the scarce amount of comparable products. Under the electric car niche industry, Tesla holds the only luxury electric car line of products, making it difficult for customers to compare prices and bargain for lower prices. Moreover, 2 Team

2 69002
the Nissan Leaf, Toyota Prius, and Ford Volt’s prices all range between $21,000 to $30,000. All with similar features and packages, giving little room for customers to cross compare and negotiate. 3.Threat of New Entrants: MODERATE

Throughout the decades, there have been many automobile companies that have created their own versions of electriconly vehicles, however very few have been able to become profitable, like Tesla. “Larger, established companies that want some of what Tesla has… respond by saying they’ll be part of this exciting new market” (The Daily Beast). However, developing EV technology is costly and requires much time and investment in the R&D department. Additionally, Tesla is the only brand that holds a “dependable luxuryelectric

car” label in the industry with a strong and loyal following of customers. That customer loyalty could effectively prevent new entrants from achieving equal success in the EV industry.
4.Threat of Substitutes: HIGH
Although there are only a few automotive makers in the market, electric car price points are significantly higher to those that of its substitutes, fueledbased
cars. Therefore, this makes the threat of substitutes exceptionally high. On a broader scope, the transportation industry is vast and encompasses not only mainstream cars, but also public transportation vehicles such as buses and trains. Yet, Tesla Motors is the only automotive maker that focuses solely on electric powered vehicles, whereas other companies also have standard gasolinepowered

vehicles. The electric vehicles’ price range varies between $25,000 $ 100,000 so there are various price points for consumers to select an electric car. 5.Competitive Rivalry within the Industry: MODERATEHIGH Although one can argue that the electric car industry itself has not been the most lucrative industry, the government’s involvement and Tesla Motors’ success has sparked competitive rivalry. “Tesla’s biggest windfall has been the cash payments it extracts from rival car makers (and their customers), via its sale of zeroemission

credits. A number of states including California require that traditional car makers reach certain production quotas of zeroemission vehicles” (WSJ). Even the automotive makers that do not produce electric vehicles are being impacted by the development of the electric car industry. Therefore, automotive makers are seeking to penetrate Tesla’s success in the EV industry; “established luxury brands also are planning to challenge Tesla with plugin models of their own, such as the BMW

i3 and a Cadillac ELR plugin
hybrid coming from GM.” With the pressure Tesla Motors has created, and with the government requirements, automotive makers will see a steady increase in the competition. Profit Potential (Attractiveness) of the Industry

The EV industry provides profit potential for automotive makers who are in or have yet to enter the electric car market. Suppliers have a significant part in the industry as the components within the vehicles are specialized. Buyers, however, do not have as significant power due to the various alternatives to just using electricpowered 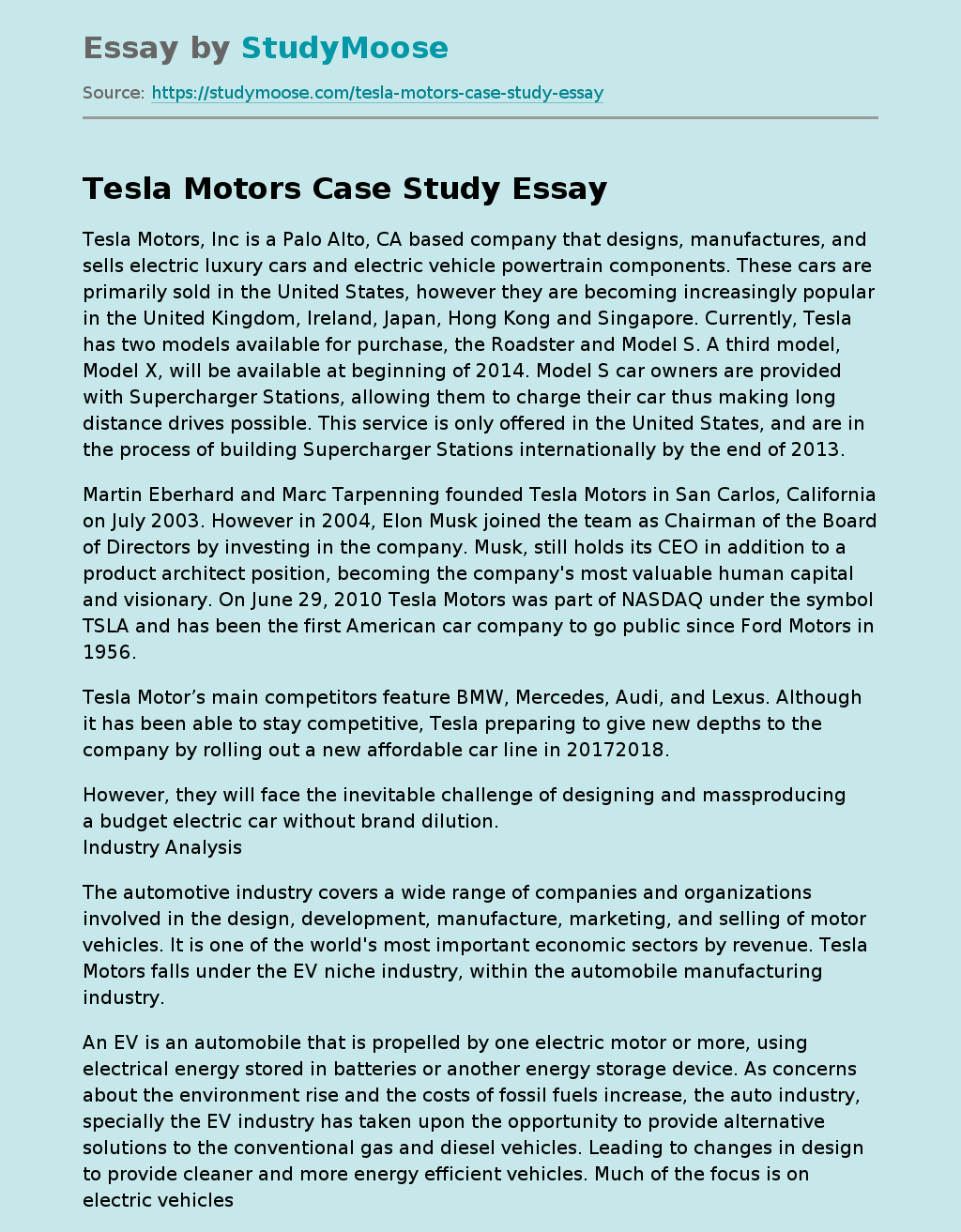