The Many Benefits of Electric Vehicles

Aaron QiMrs. White9 Honors LADecember 14, 2018The world is changing drastically, and what seemed like a science-fiction vision is progressively becoming our current reality. It seems like that progress is spreading to all spheres of humanity’s life, but one of the most incredible breakthroughs has been accomplished in energy recently. Almost two decades ago, it seemed as if there was no effective alternative to the conventional fossil fuels such as oil and gasoline, but it turns out that there is a cleaner, better, and more efficient substitute to them: electricity.

Don't use plagiarized sources. Get your custom essay on
“ The Many Benefits of Electric Vehicles ”
Get custom paper
NEW! smart matching with writer

Although electric engines are not very widespread, more people are considering switching their gasoline-fueled vehicles to electric vehicles. This choice is more than reasonable. The controversial issue is whether electric vehicles are actually better for the environment than traditional cars. It mainly comes from the fact that electricity comes from fossil fuel plants and if it’s worse than emissions directly from gasoline cars. On one hand, critics pronounce that the production of electric vehicle parts and the sources of electricity outweigh the benefits to the environment.

While the use of most electric vehicles does result in some emissions–the electricity used to power them has to come from somewhere, including fossil fuel-burning plants–such vehicles are, all things considered, far friendlier to the environment than traditional cars, a 2015 Union of Concerned Scientists analysis showed(Yang). This is due to the fact that that electric vehicles are more efficient in harnessing the energy and letting less going to waste compared to gasoline vehicles. Furthermore, many states in the U.S. are making big strides to reduce fossil fuel power plants and resort to renewable sources on energy, and this will result in practically zero emissions. The state of California will require utilities in the state to get half their power from renewable sources by 2030, with tougher standards anticipated in the future(Yang). There is a reason why California provides incentives for electric vehicles and promotes renewable sources of energy. It all ties into the environmental benefits and with the largest state by population making moves to transition, other states will follow.Electric vehicles emit no tailpipe pollutants, although the power plant producing the electricity may emit them. Electricity from nuclear-, hydro-, solar-, or wind-powered plants causes no air pollutants. (All-Electric Vehicles). In countries where renewable sources of energy are present, electric vehicles make sense. The world cannot rely on fossil fuels forever. It is safe to make the transition to electric vehicles early on, so in the future, most of the cars on the road will have no emissions linked to them. Efficiency of cars play a substantial role in how much if affects the environment and greenhouse gas emissions. Electric cars are also known to be more efficient in terms of converting energy than gasoline and that results in less greenhouse gas production. There is a surplus of energy stored in gasoline, but the inefficiency of cars only harnesses one-fourth of the energy. Fuel Economy has a statistic that reveals, EVs convert about 59%”62% of the electrical energy from the grid to power at the wheels. Conventional gasoline vehicles only convert about 17%”21% of the energy stored in gasoline to power at the wheels (All-Electric Vehicles). With electricity almost 3 times more efficient than gasoline when utilized in cars, it makes sense why electricity is a cleaner and more sustainable source of energy. The nature of both electricity and gasoline reflect these statistics very well. The process of combustion in cars release large amounts of heat and friction that results in less energy going to the wheels and more wasted in heat production. The result of more efficient cars is less greenhouse gas production (Where the Energy Goes). Plug-in cars emit less global warming pollution than cars powered by gasoline even when fueled from today’s electricity sources(Kaplan). This is largely due to electric motors being vastly more efficient than the traditional combustion engine, driving a car much farther on the same amount of energy. Studies have also compared global warming pollution from electric cars versus that from conventional cars. There is a wide range of results, due to a number of factors that differ from study to study”for example, the gas mileage of the conventional cars plug-ins are being compared against, and the amount of electricity plug-in cars are assumed to use. However, over 40 recent studies have shown that plug-in cars produce less carbon dioxide than traditional gasoline-powered cars(Kaplan). This ties back into the efficiency of electric vehicles and how much of an impact it makes in terms of greenhouse gas emissions. Adding onto the efficiency of electric vehicles, they are still better for the environment even if powered by fossil fuels. Electric vehicles generally produce less greenhouse gasses even with the current fossil fuel sources. This is to no surprise since electric vehicles are drastically more efficient than gasoline vehicles in terms of utilizing energy. Furthermore, using electricity generated from coal does not mean more emissions from an electric vehicle, since no electric grid in the U.S. is 100% coal. Many electric grids are much cleaner in terms of global warming emissions, such that the majority of Americans today live in regions where driving the average electric vehicle produces less emissions than even the most efficient gasoline car ” a 50 mile per gallon Prius (Anair). This proves to show just how much more efficient and cleaner electric vehicles are compared to gasoline vehicles. If the most efficient gasoline car produces more emissions than an average electric car, the answer is very clear which one is better for the environment. What is more important than the electric cars themselves are the sources of energy that power them. Electricity from coal has large negative impacts, natural gas is better, and renewables are the cleanest. The research cited in a USA Today article shows significant health and global warming emissions benefits from electric cars that use electricity derived from natural gas or renewable sources of energy. In the words of the author, These findings demonstrate the importance of clean electricity, such as from natural gas or renewables, in substantially reducing the negative health impacts of transportation (Anair). Electric vehicles are proven to be more efficient than gasoline cars when powered by coal, but with the the absence of fossil fuel power plants, electric vehicles will be virtually emissionless. Fuel economy states, Electric vehicles emit no tailpipe pollutants, although the power plant producing the electricity may emit them. Electricity from nuclear-, hydro-, solar-, or wind-powered plants causes no air pollutants. (All-Electric Vehicles)Works CitedAll-Electric Vehicles. Fuel Economy, 2018, www.fueleconomy.gov/feg/evtech.shtml.Anair, Don. USA Today Gets It Wrong ” The Benefits of EVs Are Real. Union of Concerned Scientists, 24 Feb. 2015,blog.ucsusa.org/don-anair/usa-today-gets-it-wrong-the-benefits-of-evs-636.Kaplan, Siena, et al. “Plug-in Electric Vehicles Will Reduce Air Pollution.” Pollution, edited by Louise I. Gerdes, Greenhaven Press, 2011. Opposing Viewpoints. Opposing Viewpoints in Context, Accessed 6 Dec. 2018. Originally published as “Charging Ahead: Curbing Oil Consumption with Plug-in Cars,” Environment Maryland Research and Policy Center, 2010, pp. 7-14.Where the Energy Goes: Gasoline Vehicles. Fuel Economy, 2018, www.fueleconomy.gov/feg/atv.shtml.Yang, Tseming. “Yes: Rebates a Prudent Way to Save World from Climate Change.” TCA News Service, 24 Aug. 2017, pp. n/a. SIRS Issues Researcher,

The Many Benefits of Electric Vehicles. (2019, Aug 20). Retrieved from https://studymoose.com/the-many-benefits-of-electric-vehicles-essay 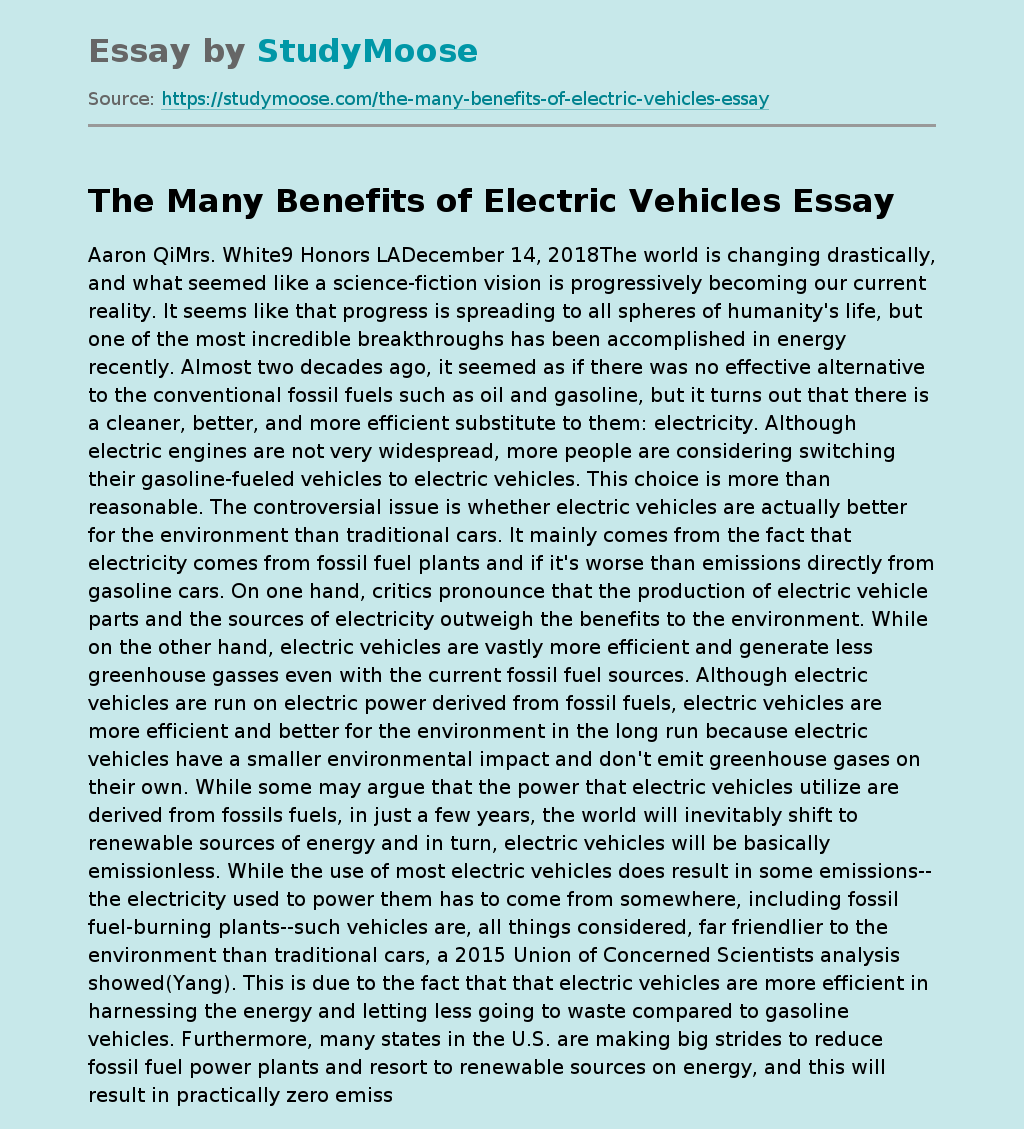