Tesla Motors, headquartered in Palo Alto, California, is a United States (US) based business that develops, manufactures, and offers electric vehicles internationally. The business is traded publically on the NASDAQ with a market capitalization of $30.8 billion. Under the management of CEO, Elon Musk, the business seeks to supply a range of high performance electric vehicles (EVs) to customers in the near future. The following is an external analysis of Tesla Motors.

Making batteries in huge volumes is a key part of Musk’s plan to drive down system costs so that electric vehicles can become affordable to a much larger market. Tesla plans to cut battery pack costs by 30%, which will strike the target price of $35,000 for its third-generation car. Musk is doing this by constructing a giant battery plant in Nevada, referred to as the “Gigafactory.” In addition, Tesla is targeting to market massive electrical power storage systems used by power companies, where low system expenses are also a key competitive aspect.

Tesla has utilized its reputation in the industry as a strength and has actually struck deals with other strong companies to form acceptable partnerships. In June 2014, the business revealed a collaboration with Panasonic that included the production of lithium ion cells inside the facility for addition in Tesla’s battery packs. In April 2014, China Unicom (Tesla’s very first retail partner) accepted install charging stations for Tesla’s EVs at numerous retail outlets across the country.

As a part of the agreement, Tesla will provide charging points for installation at 400 China Unicom retail outlets in 120 cities; China Unicom will provide upkeep and electrical energy supply for the retail stations.

Lux Research has predicted that Tesla will only be able to sell 240,000 vehicles a year by 2020, less than half the 500,000 it has forecasted. The research firm said this would leave Tesla with an overcapacity in battery production that would not be reconciled in sales to other car companies or for other battery applications. In addition, it is uncertain if Tesla’s charging stations (in China) will be immediately compatible with other electric cars, creating a potential obstacle that could hinder sales in the world’s largest automotive market.

Tesla was cash-flow negative in the last quarter, and its debt has a junk credit rating from Standard & Poor’s because of uncertainty about its long-term prospects. According to JP Morgan, all of Tesla’s operating cash flow derives from working-capital changes, not profits, through 2015; and there is no cash flow left after capital spending until 2016.

Tesla shares approached an all-time high after global banking and financial services company Deutsche Bank lifted its rating due to Tesla’s aggressive expansion plan. Deutsche now expects Tesla to ship 100,000 vehicles in 2016, two-thirds ahead of its prior forecast. Tesla has the opportunity to live up to this optimistic expectation. To date, an industry standard design for EV charging stations is not in place. As Tesla builds charging stations for their own cars, other auto manufacturers may follow Tesla’s lead or end up paying Tesla to use their stations for other EVs models. As a result, Tesla has the opportunity to not only be the leading manufacturer of EVs, but an energy distributor as well. Daimler AG and Toyota have decided to buy EV technology from Tesla; and more auto manufacturers may decide to do the same.

While Tesla’s business model allows the company to realize cost savings by selling their EVs to consumers directly online instead of utilizing dealer networks, this in turn also confines the network of dealers and mechanics that can service and repair Tesla vehicles. Such a limited number or accessibility to dealers may deter luxury car purchasers from buying Tesla EVs who seek convenience during vehicle maintenance periods. Car companies, such as BMW and Porsche have a wide network of dealers; BMW has 150 dealers in the United Kingdom (UK) alone.

BMW and Porsche, along with Tesla, similarly market their electric and hybrid vehicles to the luxury buyer car. BMW recently announced that it plans to procure its battery orders exclusively from Samsung SDI before 2016 as it releases follow-up models to its well-regarded i3 electric car. BMW plans to begin selling imported i3 and i8 cars in China next month. Earlier this month, Daimler revealed its new Denza EV, made in China, in cooperation with the Shenzhen-based BYD Auto Company. The dealings and operations of other reputable car manufacturers that are introducing luxury and high performance vehicles to the same market segment threatens Tesla’s ability to stay at the top.

Through grants, and initiatives, the US Department of Energy (DOE) has put a great emphasis in recent years on EV’s. The “EV Everywhere Grand Challenge” set forth a goal to improve EV and battery technology, allowing an EV to be as affordable as any gasoline-powered vehicle for the average American. In August of this year, the DOE invested $50 million towards the advancement of efficient vehicle technologies. The American Recovery and Reinvestment Act, which was part of the Recovery Act of 2009, also provided $816.3 billion in funding (recovery.gov/arra).

In addition to the tax breaks in the US, global political incentives, subsidies, and tariffs vary. Some countries have high incentives for purchasing EVs, due to large tariffs on vehicles with internal combustion engines (Norway). Many of these incentive programs have short implementation lives or a cap on the number of vehicles allowed to participate, so how these programs develop and if they are extended will have great effects on the industry, market, and demand.

For most Americas, buying a car is a big ticket item, taking five to six years to pay off on average. Economic conditions play a major role with consumer purchases and affect car buying behavior. As the economy continues to rebound from the 2008 recession, car sales are increasing, consumers are looking to replace older vehicles, and Tesla plans to take advantage of the opportunity to offer EVs to a larger market of consumers in the few years ahead.

Socio-cultural scanning often involves the analysis of the values and beliefs, language, religion, education, and literacy of the consumer market. Currently, Tesla vehicles are sold to consumers in the United States, United Kingdom, Norway, Netherlands, Canada, China, Germany, Switzerland, Belgium, Denmark, France, Sweden, and Austria. After the US, sales were the second highest in Norway (Mick 2014). Results from scanning the socio-cultural components of the consumer market in the various countries reveal how marketing to luxury sedan seekers in the US will differ compared to the environmentally-friendly Norwegians, and bilateral-trade concerned Chinese.

Sales have seen a boost in Norway, the Netherlands, and Switzerland due to several government incentives and breaks on tariffs for foreign EVs, compared to their foreign, heavy emission sports car counterparts. Sales can also expect to see a boost from the less environmentally conscious Chinese, by eliminating government imposed tariffs on imported vehicles should Tesla choose to team up with a local Chinese firm.

Tesla’s long-term plan includes building a wide-range of luxury and affordably priced family cars. Tesla has begun the implementation of this plan by introducing the Model X, targeting the hearts and minds of the affluent female car buyer. Analysts don’t expect cannibalization of Model S buyers, most likely attributed to the differing socio-cultural backgrounds.

Tesla is most assuredly affected by changes in the technology sector and heavily invests in research and development and the hiring of top talent. Scanning the technological sector assists Tesla with long-term strategic planning and developing an infrastructure that can continue to support business objectives. Several of the biggest obstacles EV manufacturers and consumers face revolves around high production costs and battery charging technology. This is where Tesla hopes to beat the competition.

Tesla’s CEO, Musk, shared in his blog, “The strategy of Tesla is to enter at the high end of the market, where customers are prepared to pay a premium, and then drive down market as fast as possible to higher unit volume and lower prices with each successive model” (Musk 2006). Musk has also released many of his patents with the hopes of increasing the rate of innovation for battery and quick-charging technology, knowing that the likelihood of infrastructure support will increase with the decrease of costs for EV technology.

While the energy efficient vehicle market was predominantly driven in the past by the environmentally conscious, other drivers including monetary and regulatory have brought about an increase in demand in recent years. The automotive industry has faced regulatory and societal pressures that has forced it to produce more energy/fuel-efficient vehicles. With the sustained and increasing energy and gas costs, as well as the increased availability and reduced cost of solar technology, the EV market has great growth potential that is only likely to continue to increase. A major threat to the EV market includes alternative technologies that could satisfy the demand for an energy efficient, environmentally friendly, and less costly vehicle.

Requirements have been imposed to develop and release more energy efficient models, specifically by the “Big 3” as a result of the US Auto Industry bailout. In the US, some states have disallowed the direct-to-consumers sale of vehicles. Regulatory measures to reduce greenhouse gasses and energy consumption, as well as increase the environmental, energy, and fiscal security of countries have been implemented globally. This has forced the hand of automakers to improve the technology and efficiency of their vehicles, and incentivized new companies to enter the market.

Tesla Motor’s competitive strategy in the auto industry has been to maintain a focus strategy. According to Harvard Professor, Michael E. Porter, a company’s focus strategy chooses to offer products and services for a selected segment of the market. Many times, smaller and growing companies elect to implement focus strategies due to capital restraints or niche product offerings. In Tesla’s case, the company’s focus strategy targets the luxury car buyer that wants performance, upscale style, a low environmental carbon footprint, and tax incentives with their car purchase. As the company continues to expand their production line and capabilities, Tesla anticipates being able to lower the cost of their EVs and make them affordable for non-luxury car buyers. However, it is unlikely that Tesla will move into a low cost provider strategy, which is generally led by companies such as Toyota Motor.

Some of Tesla’s top competitors include Toyota Motor (low cost leader) and Daimler AG (differentiation leader). Toyota Motor has arguably secured the low cost leader position in the auto industry by offering its products across many market segments (top selling cars include the Prius, Corolla, Camry, and the Rav4). Daimler AG is well known for their Mercedes-Benz luxury vehicles and differentiates its brand by offering customers sophisticated luxury with high performance. 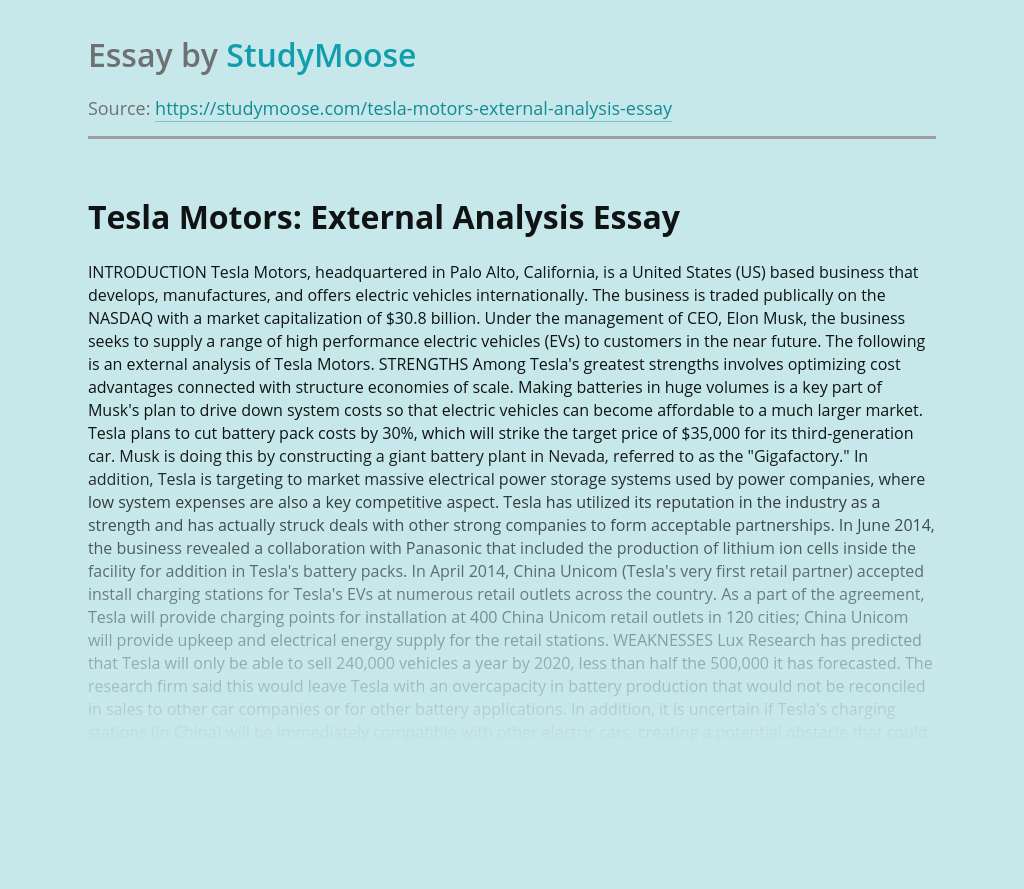