As noted earlier, tertiary stress management intervention is concerned with the rehabilitation of individuals whose health or other aspects of well-being have suffered in ways that affect their performance in the workplace. They aim to minimize the negative consequences of stressors by helping employees cope more effectively with them. Relevant typical interventions include employee assistance programmes (EAPs) and counselling. EAPs seem to be very popular indeed. As Arthur (2000) puts it, “they are now employed as one of the main occupational stress interventions”.

Don't use plagiarized sources. Get your custom essay on
“ Tertiary stress management ”
Get custom paper
NEW! smart matching with writer

The UK Employee Assistance Professionals Association has defined EAPs as “… worksite focused programmes to assist in the identification and resolution of employee concerns such as personal or work related matters, which affect, or may affect performance” (UK EAPA, 1998). Although there is no standardized model of EAP practice (Arthur, 2000; Davis and Gibson, 1994), most such programmes seem to almost invariably include confidential assessment, counselling, and therapeutic services for employees (and sometimes their dependants).

It is also common for telephone helplines for advice on domestic, legal, medical and financial matters to be provided within the context of the same (contracted out) service.

EAPs have a long history in the USA (some going as back as the 1920s) with most of the early schemes dealing primarily with alcohol and substance abuse. Many such programmes were subsequently extended to cover more general social and psychological employee problems and it is in this latter form they are becoming increasingly popular in the UK. Interestingly, the UK may be unique in its enthusiasm for EAPs among major European countries (Kompier and Cooper, 1999).

Despite the popularity of workplace counselling services very little research has been carried out on them and whatever research has been conducted seems to be methodologically inadequate ( Arthur, 2000; Berridge, 1999; Blaze-Temple and Howat, 1997; Csiernik, 1995). Arthur (2000) comments on the current state of affairs regarding EAPs as follows: “These services are unregulated, of variable quality and have not been subjected to proper evaluation and scrutiny by researchers and critics” (p. 500). Estimates of the effectiveness of EAPs are often extrapolated from a broad range of studies of counselling and psychotherapy.

However, as Reynolds (2000) notes, the extent to which the positive results of formal psychotherapy and the more equivocal ones of counselling in primary care setting “can be generalized to informal counselling services for workers with less severe problems is unknown” (p. 316). Moreover, what are often considered to be encouraging findings for EAPs may not be very relevant in a UK context as they are based on American studies in the 1970s and 1980s on large alcohol and drug abuse programmes involving mandatory referral (Arthur, 2000; Macdonald, Lothian and Wells, 1997).

Only a few such studies relate to more broadly based EAPs in large American organizations as, for example, the McDonnell Douglas study (Alexander Consulting Group, 1989) which is usually quoted as having delivered an estimate of an overall savings to be 4 dollars returned for each dollar spent on EAPs (Berridge, Cooper and Highley-Marchington, 1997, 1997). But, as Masi (1997) points out, while establishing the usefulness of the EAP for the treatment of alcohol abuse this study fail to provide conclusive evidence of the cost-effectiveness of more broadly based EAPs.

A review of seven major American broad-based EAP evaluation studies found that despite some encouraging any discussion about whether the benefits spring from the EAPs involved “… could be written off as self-interest by internal providers and as anecdotal writings with a research methodology utilized that has conspicuous limitations” (Cserniak, 1995/p. 34).

One of the very few UK evaluations of an internal counselling programme was carried out in the Post Office (Cooper , Sadri, Allison and Reynolds, 1990). Findings from 250 employees who had received counselling were compared with a matched control group. Significant declines in sickness absence, clinical anxiety levels, somatic anxiety and depression, and increases in self-esteem were reported. Importantly, however, there were no changes in job satisfaction or in organizational commitment.

The Health and Safety Executive in the UK commissioned the Manchester School of Management to carry out the first nationwide, independent study of British EAPs and workplace counselling in nine separate companies (Berridge, Cooper and Highley-Marchington, 1997). After receiving counselling and at follow-up clients reported significantly improved general and work-related mental and physical well-being, compared to before counselling and an unmatched control group. With the exception of sickness absence no organizational relevant benefits were obtained.

Marchington-Yeoman and Cooper (2002) comment on these findings, which were similar to those obtained in the Post Office study, as follows: “the company-wide data do not suggest that an EAP has any effect on the organization, other than reducing absence in those who use the service” (p. 219). The evaluation research that has been carried out appears to suffer from many methodological problems. Not that we are short on proposals on how best to conduct such research.

Rather, as Arthur (2000) notes, “the literature contains considerably more articles on how to conduct such research than has actually been carried out” (p. 553). Proposals for methodologically sound research in this area include the following: Uniform and standardized data that would allow comparison between studies, a true experimental research design involving proper control groups, collection of data at least 3 years prior to and 3 years following the EAP intervention, use of valid performance indicators and a cost-benefit analysis (Arthur, 2000; Blaze-Temple and Howat, 1997; Macdonald, Lothian and Wells, 1997).

Given the nature of this list, Arthur’s conclusion is rather unsurprising: “To date there is no single study that can satisfy all these criteria” (Arthur, 2000/p. 553). Additional suggestions on how to improve our understanding the effectiveness of EAPs and related interventions include paying more attention to the variety of the employers’ motives for setting up counselling (Berridge, 1999) and the moderating effects of organizational culture (Carroll, 1996).

Although such proposals are potentially very interesting it should be noted that they remain at present mostly speculative. Suggestions for improved counselling provision or research on EAPs should not distract us from the realization that “the growth of EAPs in North America and the UK is not matched by firm and substantial research to provide evidence of their effectiveness (Arthur, 2000/552).

In fact so little seems to be known about EAPs in particular that Briner (2000) is capable of issuing perfectly reasonable reversals of what could be expected following the introduction of EAPs. He turns, almost entirely effortlessly, what are usually taken to be expectations for invariably positive outcomes (e. g. , the employee feels better as the result of an EAPs therefore shows more commitment to the organization) into distinct disadvantages for organizations or employees alike (and vice versa). In our example, the employee decides that his job is not worth carrying out well! 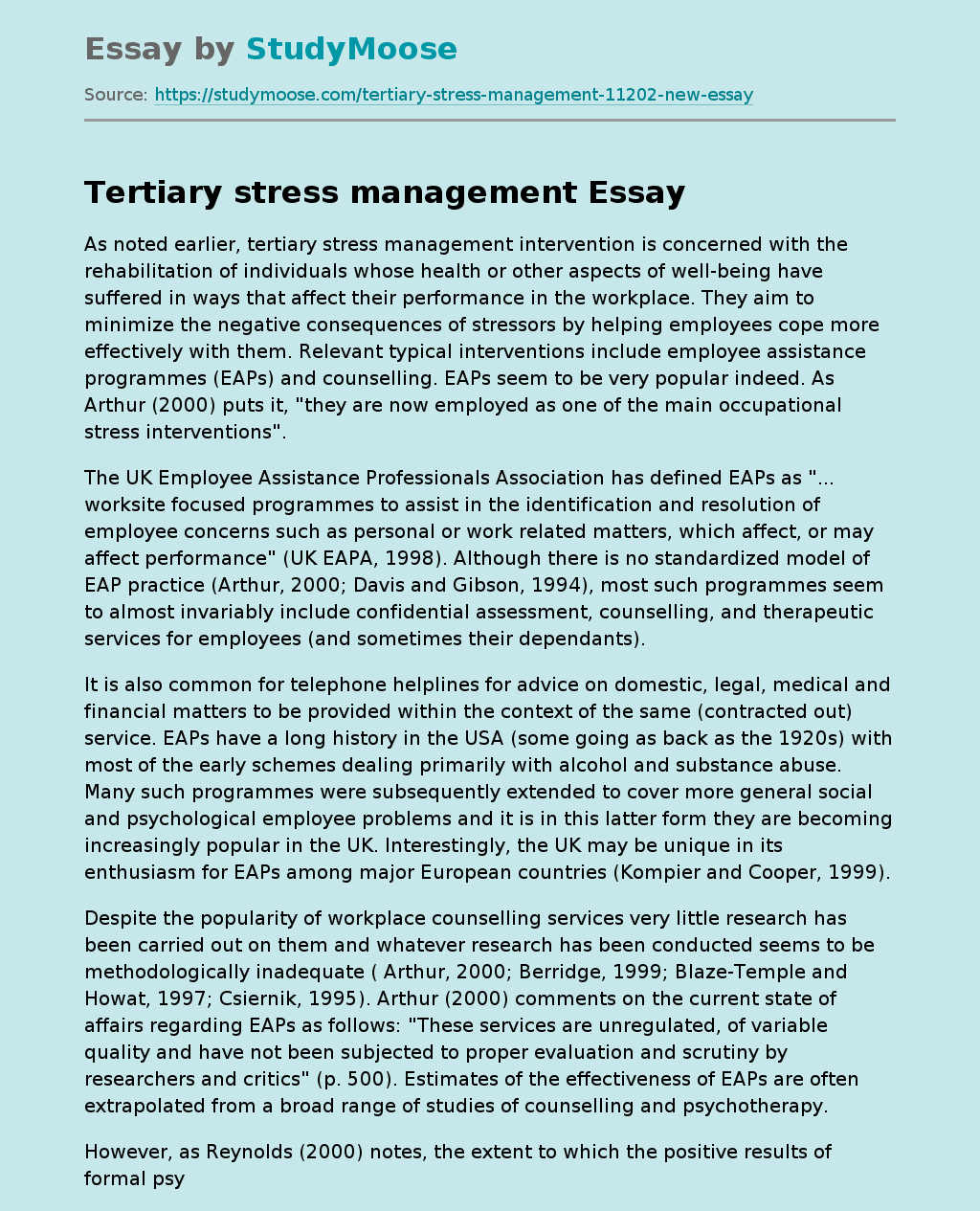