Should all police be required to have tertiary qualifications?The perspectives on police

Should all police be required to have tertiary qualifications?The perspectives on police officers on higher education is a degree necessary for the performance of police officer’s university degrees for police officers have been a subject for many years. Few qualitative studies have addressed issues pertaining to whether or not police officers (of all ranks) believe a college degree is important. Additionally, little is known regarding job satisfaction/dissatisfaction among officers with different levels of educational attainment within the policing field.

Don't use plagiarized sources. Get your custom essay on
“ Should all police be required to have tertiary qualifications?The perspectives on police ”
Get custom paper
NEW! smart matching with writer

A qualitative analysis of police officers’ belief and opinions pertaining to the worth of a college education in relation to police performance and behaviour was conducted. police officers believe a college degree aids them in job performance and behavioural issues related to their occupations. (Lincoln & Guba, 1981). In 1974, 47% had at least one year of university (Police Foundation, 1979). Two decades later, in 1990, 65% of police officers had at least one year of university; 23% had attained a four-year degree (Carter & Sapp, 1990). Sixty-one police officers were interviewed for this qualitative study.

This was a non-random convenience sample of selected police officers. Interested participants were recruited through Southeast Missouri State University’s Criminal Justice Department’s undergraduate and graduate internship programs. In-depth, structured interviews (1-1.5 hours each) were held in the researcher’s office and/or in conference call rooms at the police departments. Participating officers represented 16 different police departments (medium-large size) from two Midwestern states. Over 85% of the participants were male (86.9%), whereas, (13.1%) were female. Of the officers interviewed, 52 (85.2%) were Caucasian and six (9.8%) were African American.

Should all police be required to have tertiary qualifications?The perspectives on police. (2019, Aug 20). Retrieved from https://studymoose.com/should-all-police-be-required-to-have-tertiary-qualificationsthe-perspectives-on-police-essay 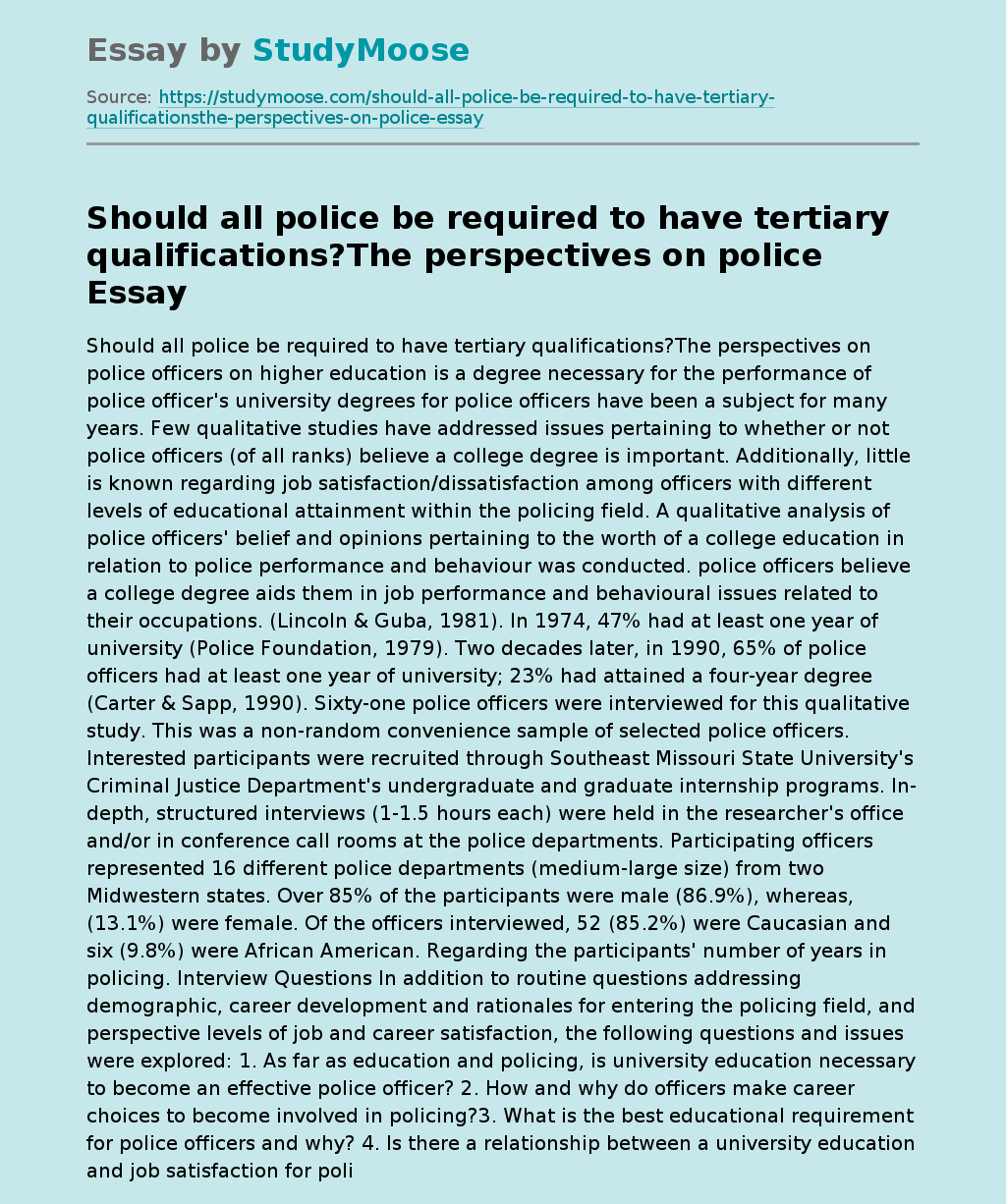