A student ride-along allows the student to observe the use of discretion and techniques that are used by the police officers who patrol our communities. Many people falsely believe that policing is what they see portrayed in the media. We never realize that there is much more to police work then what we consider entertaining or even amusing. By watching a patrol officer in the field, I was able to gain valuable insights into questions concerning why police officers stop certain individuals, why some individuals are taken into custody while others are not, and lastly how the discretion of an officer affects how they perform their jobs.

Don't use plagiarized sources. Get your custom essay on
“ Behavior of Police Officer ”
Get custom paper
NEW! smart matching with writer

I will discuss these three questions while using three separate situations that occurred during my ride-along. According to Schmalleger (2012) strict liability is a philosophy based on the presumption that causing harm is in itself blameworthy, regardless of the actor’s intent. It requires no culpable mental state and presents a significant exception to the principle that all crimes require a concurrence of actus reus and mens rea.

Going out on a ride-along, I meet up with the patrol officer; he is around my age and twice my size. He works out a lot, when asked why he does this, he replies that many patrol officers do this because it may help them out in situations, if for example a criminal wants to get aggressive; he may not if the officer is in good physical shape.

We roll out, and at approximately 8:30 a.m. we observe a late model blue ford focus swerving within the lane directly in front of us. The officer turns on his lights and sirens and pulls the car over to the side of the lane. As law enforcement officers, they must have a reason to pull individuals over. (Hurt, 1994) The reason an officer pulls you over could be as minor as having the back of your truck loaded down with branches or a traffic violation, such as running a red light. In this situation the swerving of the car gave the officer probable cause, or a set of facts and circumstances that would induce a reasonably intelligent and prudent person to believe that a particular other person has committed a specific crime. (Schmalleger, 2012) Due to probable cause the police officer is able to pull the woman over because he may believe that the driver is under the influence of drugs or alcohol.

(Hurt, 1994) As he steps up to the driver’s window he explains to her why she was pulled over, most officers will do this, but they do not have to tell you the reason for the stop. He also asks for her license, registration, and proof of insurance to prove that she has the proper materials that will allow her to legally operate the vehicle, which she has. It turned out that the woman had dropped her cell phone and had swerved in the lane due to her attempts to retrieve it, she apologized and the officer let her go with a verbal warning. I believe that the officer was right to pull the driver over due to the uncertainty of the fact that she could have been under the influence of drugs or alcohol. I also agree with the verbal warning that let her know that she was placing the lives of other innocent civilians in jeopardy just so she could find a cell phone. Hopefully she will think of others in the future and will not repeat the same dangerous actions again. Why are some individuals arrested?

Later on during the shift at approximately 10:00 a.m. the patrol officer pulls over a shiny red corvette, I did not notice the driver doing anything suspicious so I asked the officer why the car was pulled over and he stated “tinted front and side windows.” (Command, 2012) This time the officer asks the gentleman to “please step out of the car.” (Command, 2012) Later the officer explains that due to the tinted windows of the car, he had to be sure that he was able to see the drivers hands at all times during the traffic stop. According to Jones (2011) as an officer of the law he was able to order the driver of the vehicle out of his car without any violation of his fourth amendment rights. He would also be able to search the car if he had believed that the driver had a gun, alcohol, or drugs within. (Jones, 2011) The officer chooses not to do a search of the vehicle. He did however, check the driver’s license and registration to see if he had any warrants or violations on his record, which he did not. If the driver had warrants or violations he could have been arrested.

According to Schmalleger (2012) an arrest means that the police will detain a suspect for a certain period of time to investigate a possible crime. If the arrest is based on a warrant, the law enforcement officer that has pulled the individual over has the right to arrest the person if the officer should encounter them. (Erikson, 2010) Arrests are frequently made when the civilian pulled over has a warrant issued against them, if a suspect is caught committing a crime, of if the officer has a reasonable suspicion that a suspect has committed a crime. (Erikson, 2010) In this situation the owner of the red corvette was found to be in compliance with Texas law. According to Collins (2010) Texas law on the tinting of front and side windows must allow at least twenty-five percent or more light into the vehicle. I feel that the officer made this stop due to his uncertainty regarding the rules regarding the tinting of windows within the state of Texas and so decided it was better to pull the driver over and check then to allow a possible violation of the law. How does the discretion of an officer affect how they do their jobs? As the afternoon wore on, we continued to drive and the officer ran checks on several civilian license plates. He pulled over two vehicles and questioned the drivers.

Officers are often faced with situations that call upon the police officers discretion. According to Schmalleger (2012) police discretion is the opportunity of law enforcement officers to exercise choice in their daily activities. Some influences on an officer’s discretion might include lifestyle choices, the attitude of the community, previous life experience, values and beliefs. (Schmalleger, 2012) The laws and regulations that form our criminal justice system account for most of the issues that an officer of the law faces in the field but often they are faced with situations that require that he or she make a judgment call to control and resolve issues. (Hurt, 1994) Police discretion is present in almost every aspect of the system and can be seen in the many options available to officer in cases that vary from very minor offences to violent crimes. The action that the officer takes can also be determined by the circumstances surrounding the situation. In the end no one was detained and no tickets were given out to the drivers of the vehicles.

I understood why the officer ran several vehicles license plates and then pulled them over to question some of the drivers. As a police officer you would never be able to tell when the plate that you put in the system to check will pull up a warrant for that individual or if a person will be under the influence while operating a vehicle. My ride-along was not filled with excitement or serious action but I did learn a lot about what real police officers do while on patrol. Everything that law enforcement officers do is to protect individuals as well as communities from violence and injury whether it is intentional or not. They help keep the peace, maintain order, and keep chaos from taking over the city streets. I was also able to find answers to the questions concerning why police stop certain individuals, why some individuals are arrested and lastly how discretion affects the officer’s job. 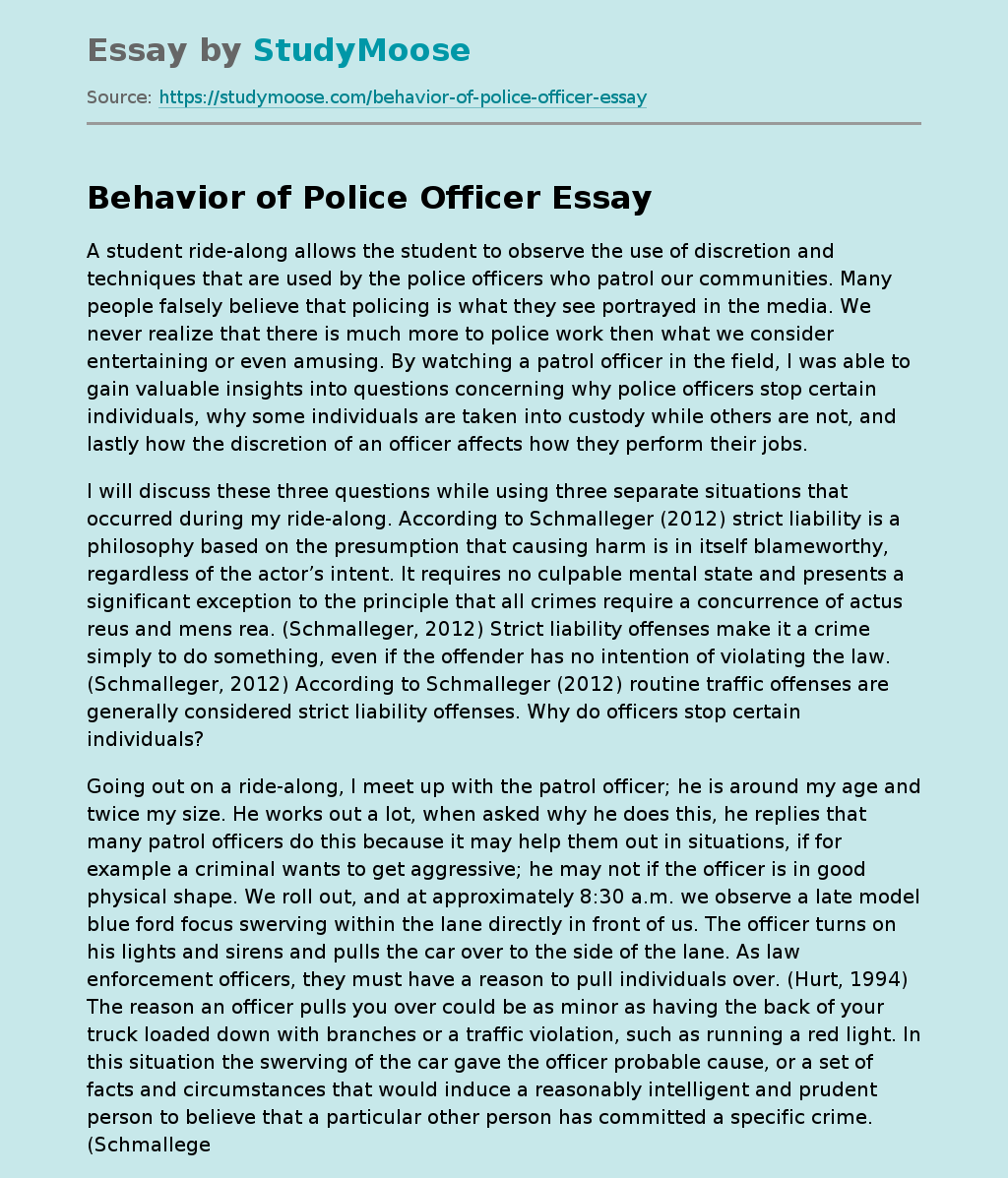