Televisions are Prominent Items Every Household Has

Televisions are prominent items every household has. On average, 2.3 television sets are present in American homes as of 2015 and has been growing since 1947 counting to only thousands (Berry and Woodward, 2017). However, its psychosocial effects are not seen immediately and stays dormant only to reappear later in life, especially on children in their adolescence. Hereby, people watching 1-3 hours of television a day – the average time spent by an individual – experience long-term psychosocial effects such as delayed verbal skill particularly on children, addiction, anxiety, irritability and an increase aggressive behavior (Takeuchi, 2013; Patel, 2018; Mestel, 2008; Wilson, 2018).

Don't use plagiarized sources. Get your custom essay on
“ Televisions are Prominent Items Every Household Has ”
Get custom paper
NEW! smart matching with writer

However, its relevance to the community has declined over the past consecutive years in a global scale. According to media data analysts Zenith Optimedia (2019), people watch television on an average of 168 minutes worldwide in 2018, a difference from 170 minutes in 2017.

Although in a national scale, Philippines remains its daily television consumption which increased by 5% since 2014 – 96.6% in 2016 while 91.2% in 2014 (CNN, 2017) – denoting its constant relevance to Philippine society. Generally, TV networks such as Alto Broadcasting System – Chronicle Broadcasting Network, commonly known as ABS-CBN and Global Media Arts (GMA) contributes to these growing numbers as they are Filipino’s most subscribed channels in free Philippine television.

Consecutively, a case study conducted by Philippine Entertainment Portal (PEP.ph) as correspondent James Patrick Anarcon (2018) shows how filipino tv shows are produced including how it managed to shape Philippine pop culture over the years. In this study, cultivation theory is believed to influence viewers wherein television itself does not directly influence culture but rather, its audience’s thoughts, opinions, and perceptions which are also factors to consider when extending or cutting shows aired on TV (Phan, 2018).

However, this psychosocial effect’s cause is undetermined. Although there are a lot of factors that may contribute to aggressiveness, TV series as an isolated factor has limited literature especially in the context of Filipino youth.

Therefore, the purpose of the study is to investigate the association between Filipino TV series with aggression.

Essay on Adolescence
Cite this page

Televisions are Prominent Items Every Household Has. (2019, Dec 07). Retrieved from http://studymoose.com/televisions-are-prominent-items-every-household-has-on-average-example-essay 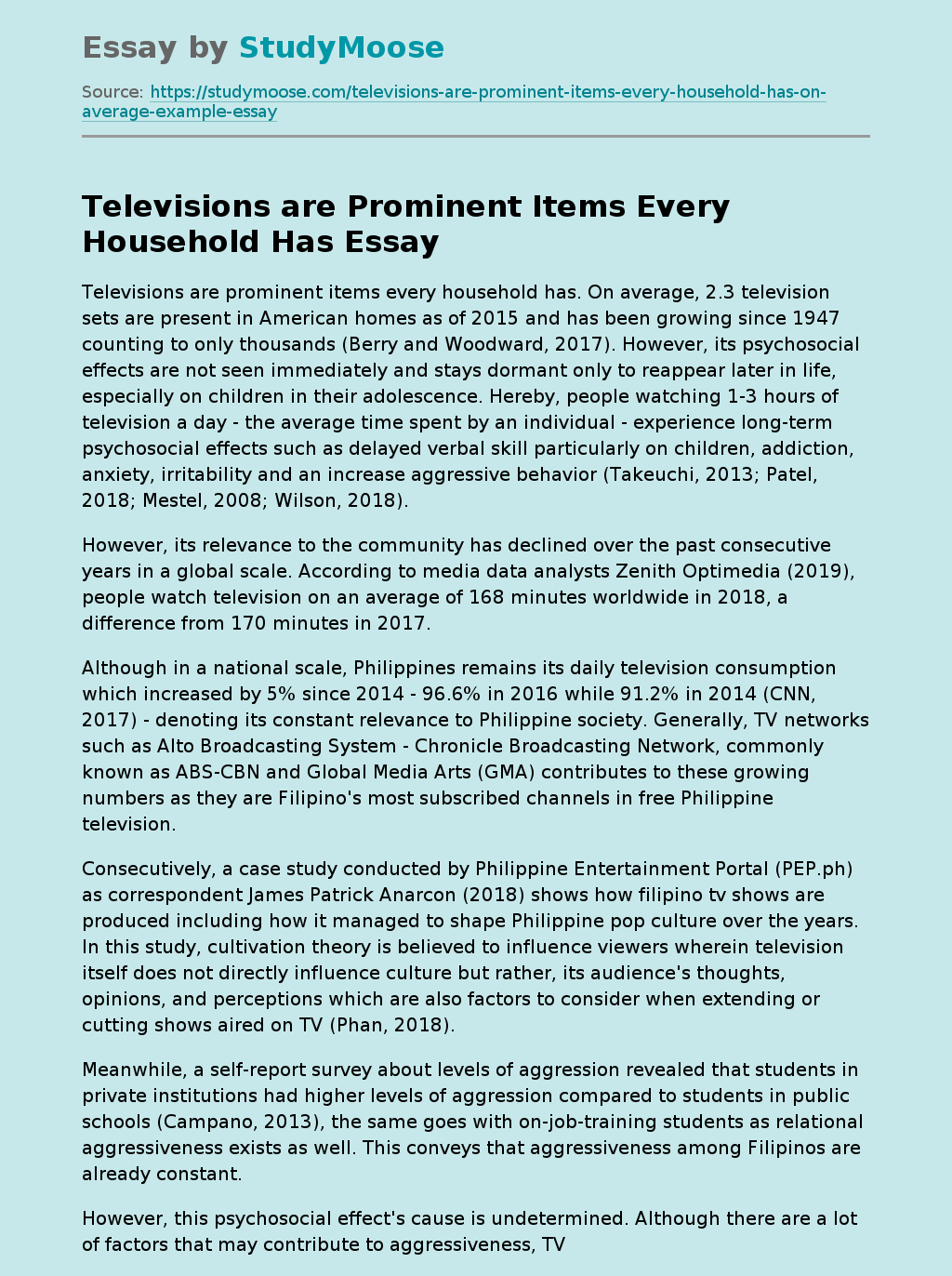