Most societies that developed in ancient civilizations were centered around some form of imperial administration and Imperial Rome (31 B.C.E.-476 C.E.) and Han China (206 B.C.E.-220 C.E.) were no different in this sense. Both civilizations had a network of cities and roads, with similar technologies that catalyzed cultural amalgamation and upgraded the standard of living, along with comparable organizational structures. Additionally, both civilizations had problems managing their borders and used similar tactics for defense. However, the Chinese Emperor was interpreted as a God while the Roman Emperor was a lugal, or big man, who had to fight not only to gain power, but to push through his initiatives.

The similarities and differences of the control and management of both regions may be attributed to the philosophical ideas and belief systems that existed at the time, influencing political structure in similar ways with only a few minor differences that set the two cultures apart.

Han China and Imperial Rome both had well developed cities and roadways that made life easier for their citizens as well as provided cultural unity.

The Roman and Han roads allowed for the easy movement of troops to respond to outside threats and facilitated trade and commerce. This system of roadways not only connected the empires but promoted the spread of ideas, like Christianity in the Roman Empire and Buddhism in China. Both empires were further linked by a network of cities that acted as a nerve system that helped to tie the empire together.

The cities were centers of administration and customs emanated into the surrounding area fostering cultural diffusion even though only around twenty percent of the population lived in cities.

The cities were managed by local officials from the middle class, the equites in Rome and the gentry in Han China, who were delegated a great deal of autonomy. Their duties were to make the government more effective and alert, and included tax collection, managing city projects, providing protection, and handling disputes. Finally, the cities in Rome and China were modeled after their respective capital cities, giving a sense of uniformity in both regions and providing comparable goods and services. The infrastructure of cities and roadways and the resultant cultural diffusion was an intricate part of both civilizations.

On a broader scale, however, Han China and Imperial Rome had much difficulty managing their empires and protecting their borders from attack. Some causes of problems for both civilizations arose from very long borders that were far away from the capital and slow communication, which meant that notice of attacks on the borders could take days or weeks to reach the capital before help could be deployed. To address this, both civilizations built walls to protect their borders, such as Hadrian’s Wall in central England and the Great Wall of China in Western China, and they also stationed small garrisons at outposts to protect against wandering marauders. However, this action led to an economic depression in both empires because of the high cost of maintaining the outposts and barriers. Both Rome and China had an effective way of managing their growing empires initially, but as they continued to expand it eventually contributed to their downfall.

With a strong centralized government, both civilizations greatly honored their leaders but the Chinese perceived them differently from the Romans, which is one of the major factors that sets these two civilizations apart. The Chinese leaders were the Sons of Heaven which went back to the Zhou philosophy of the mandate of heaven in which the leaders were placed into power by the gods and were supported by the gods. However, once the emperor lost favor of the gods, misfortunes started to happen that upset the people and they called for a new leader that would please the gods. Because the leaders were gods, they were “waited on hand and foot,”living in the Forbidden City and being helped by their plethora of servants, leaving them free to make the important decisions that involved their empire, which received widespread support.

Conversely, the Roman emperors were lugals, or big men, who often seized control by obtaining the backing of the Senate or army. This may be attributed to the gladiator fights when the stronger man overcame the weaker man and killed him. They had to resort to bribes, threats, and promises to gain their way into power, such as Claudius who was saved after his uncle, the tyrannical Caligula, was murdered by the Pretorian Guard.

Claudius was not considered a threat and was able to convince the Pretorian Guard to declare him emperor. Roman leaders also had to fight to get their ideas passed. There was a cult of the emperor but it had little spiritual validity and was more a tradition than a belief. With peaceful transitions in the Chinese culture contrasted with often violent changes in power in Rome, the ways the emperors were chosen and validated their power were significantly different in both cultures.

Both the Roman and Han China civilizations had a great deal of imperial organization. They both had well developed cities and roads, which helped spread culture and made the lives of their citizens easier. Furthermore, both civilizations had immense empires that were difficult and costly to protect. In contrast, the Han had a Zhou philosophy that the emperor was related to the gods while the Romans had a lugal philosophy where the stronger individual rose to power. While the heart of both political organizations was mainly about power, its validation was based on the worldviews of the culture. Despite minor differences, it is remarkable that both civilizations had similar political organization even though they were thousands of miles apart with very little contact. 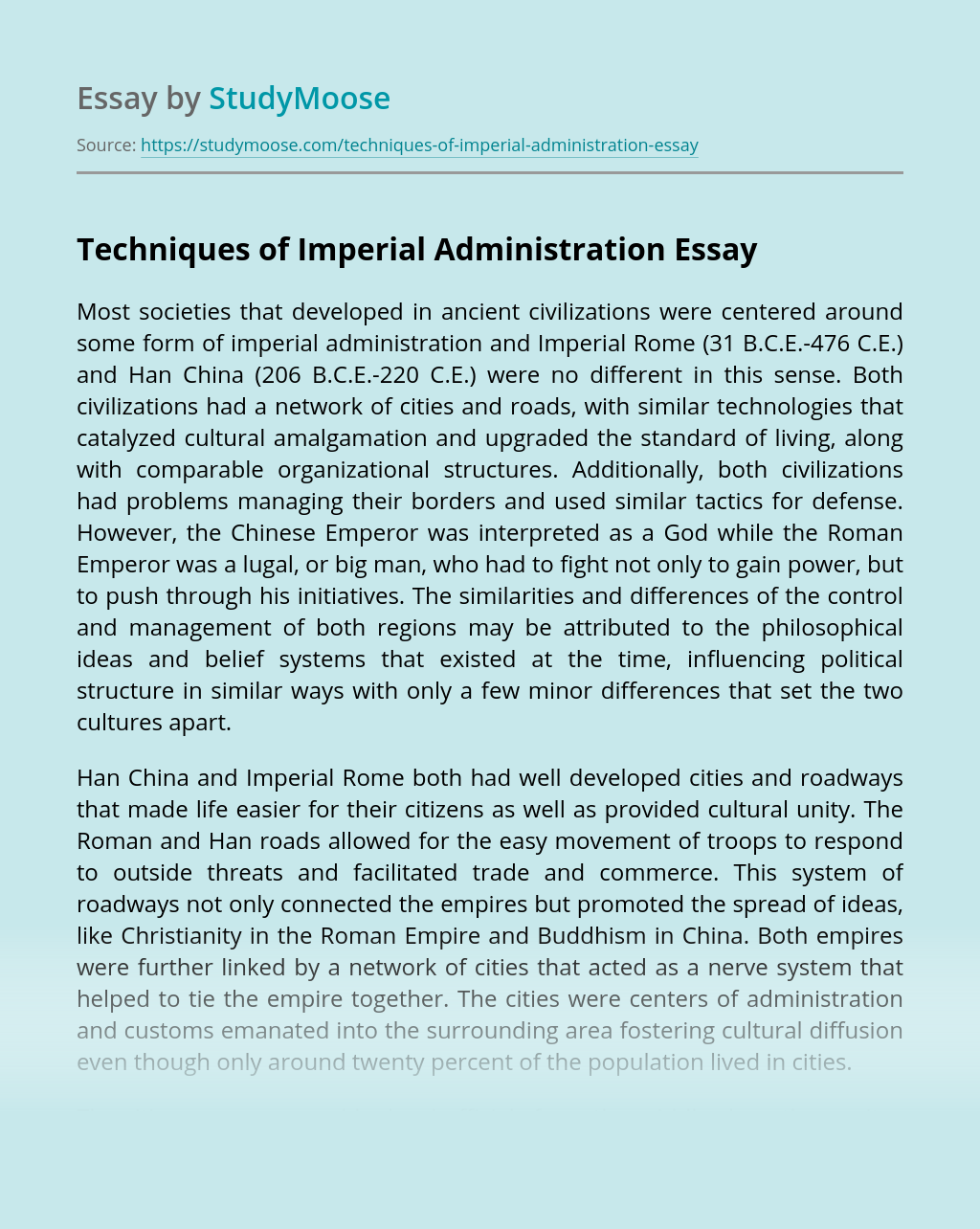 Don’t waste time
Get a verified expert to help you with Techniques of Imperial Administration
Hire verified expert
$35.80 for a 2-page paper
Stay Safe, Stay Original