In comparing Greece and Rome, I will start by pointing out that both Greece and Rome started out as city-states. Rome looked to Greece as a model while acquiring its foundation as a city-state. This fact makes it both simple, and hard to give a comparison essay of the two city-states. It is simple because they are much alike in political structure, family, and religion. However, hard because Rome outgrew its regards to its Greece political views of family, state, citizenship, and political participation.

Turn in your highest-quality paper
Get a qualified writer to help you with
“ Greece and Rome: Comparison ”
Get high-quality paper
NEW! AI matching with writer

Discrepancies came about in many elements of the social structure. Women and citizenship were two of the main discrepancies. In Greece, women were viewed as property and had very few civil rights; often if, a child was born a female, she would be left to die. They were also not allowed to live public lives. A Greek woman could not be found roaming the streets of Greece without a particular reason. Women were viewed very differently in Rome.

In Rome women had the choice to live a public life and make there own decisions. Marrying in Roman culture was considered “compassionate.” Rome was not viewed as a male-only world. Rome, unlike Greece, would extend citizenship to expand their empire. Greece was content with there position as a city-state and did not believe in inviting strangers into their civilization.

In Rome and Greece, religious practice was considered different as well. Though Greece and Rome both believed in the supreme gods, Rome was more concerned with the society it created.

As to where Greece was concerned with both its practice and the effects of the society. In Rome as well as in Greece, women participated in the practice of religious calibrations. These celebrations were a large part of their public life.

There were many differences between Greek and Roman civilization, even though the Roman culture was vastly influenced by the Greeks. Because the Romans had practiced different qualities, Rome developed an empire. Though the Roman Empire did not last, the key elements of its society can still be seen in the ever-enduring Greece civilization. 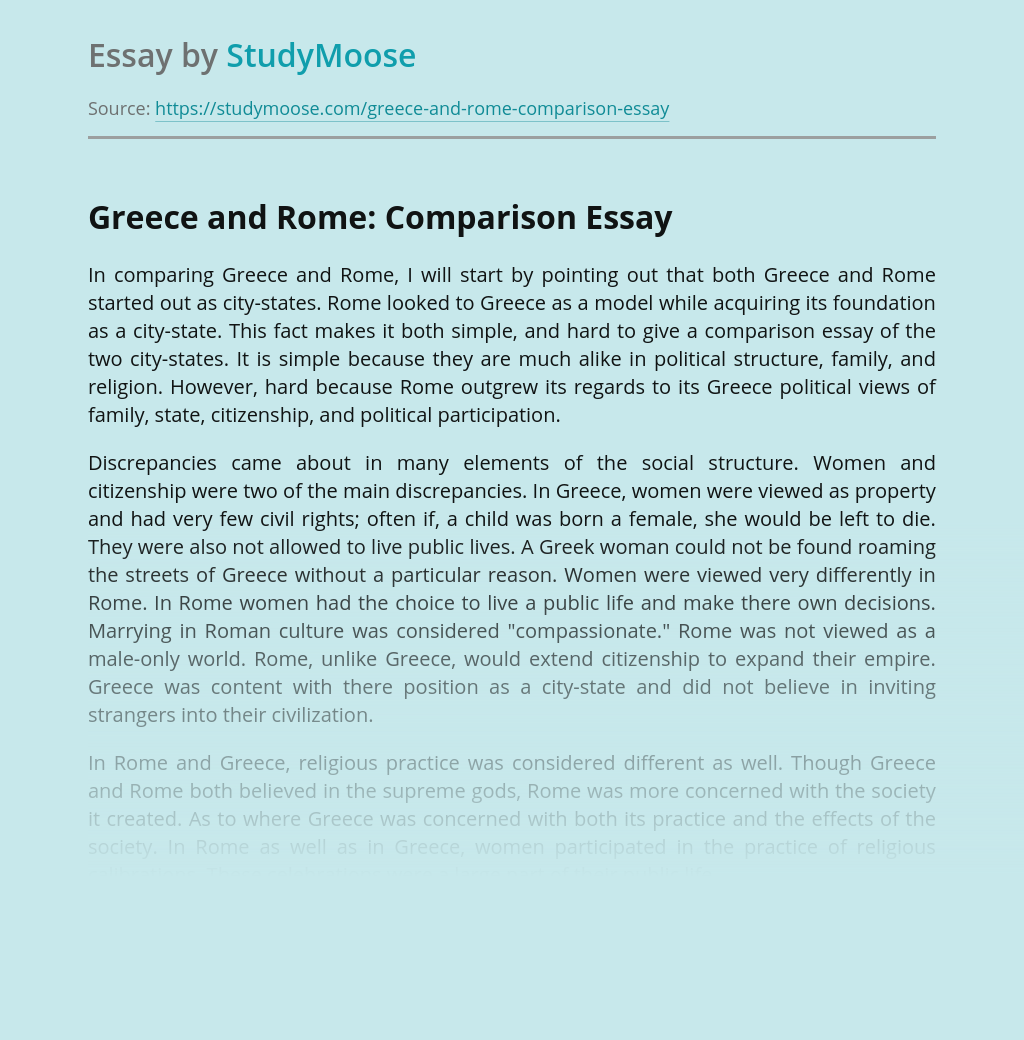 Turn in your highest-quality paper
Get a qualified writer to help you with
“ Greece and Rome: Comparison ”
Get high-quality paper
Helping students since 2015
Stay Safe, Stay Original