Cultural and Political Changes and Continuities in Rome

Rome throughout history is often thought of as rather homogeneous—ancient artifacts timeless, always the same emphases. But, while there were continuities, there were also changes of different sorts in various time periods. Specifically, cultural and political changes in the Roman civilization between 100­600 CE, the late classical era, included the rise of Christianity and the division of the empire into two halves, while a continuity was the use of Latin and Greek as common languages.

The first change, Christianity spreading throughout the civilization, is shown in the development and spread of Greek Orthodox and Roman Catholic lifestyles.

Turn in your highest-quality paper
Get a qualified writer to help you with
“ Cultural and Political Changes and Continuities in Rome ”
Get high-quality paper
NEW! AI matching with writer

Constantine legalized Christianity in the fourth century AD, and soon after, Theodosius made it the empire’s official religion. All other religions in the empire began to fade away, becoming “discouraged” at best. This was all due to the Christian missionaries who travelled the region. After this, as a result, a new controversy arose: the classic one of the separation of church and state.

The next change is that the empire soon split in half. Rome became simply too large to govern under one governmental body, and so split into the Eastern and Western halves in 284. These two had separate governments and separate religions (Greek Orthodox and Roman Catholicism respectively). Also, the halves were relatively independent from each other, fighting their own battles and having different levels of advancement in science, technology, and more. This was different from the united empire of older times.

The separation of the halves would eventually create many controversies in the future, especially whether or not they were to aid one another in battle.

A continuity of the time period, however, was the use of the common languages Latin and Greek. Latin was known as the original trademark of the Roman Empire and is still associated with it today. (This is similar to the Chinese language of—where else?—China.) Greek came a bit later, with the spread of Christianity, and became a favorite of scholars and politicians. It was originally spread by Alexander the Great. However, all citizens still needed to know Latin to be able to communicate commonly throughout the empire. Both of these languages were used throughout this time period and this use remained a continuity for the Roman civilization.

In conclusion, the cultural and political changes in the Roman Empire between 100­600 CE (late classical era) involved the rise of Christianity and the division of the empire. A continuity was the widespread use of Latin and Greek. These changes and continuities would affect global perception of the Roman Empire for many centuries to come.

Cultural and Political Changes and Continuities in Rome. (2016, Aug 31). Retrieved from https://studymoose.com/cultural-and-political-changes-and-continuities-in-rome-essay 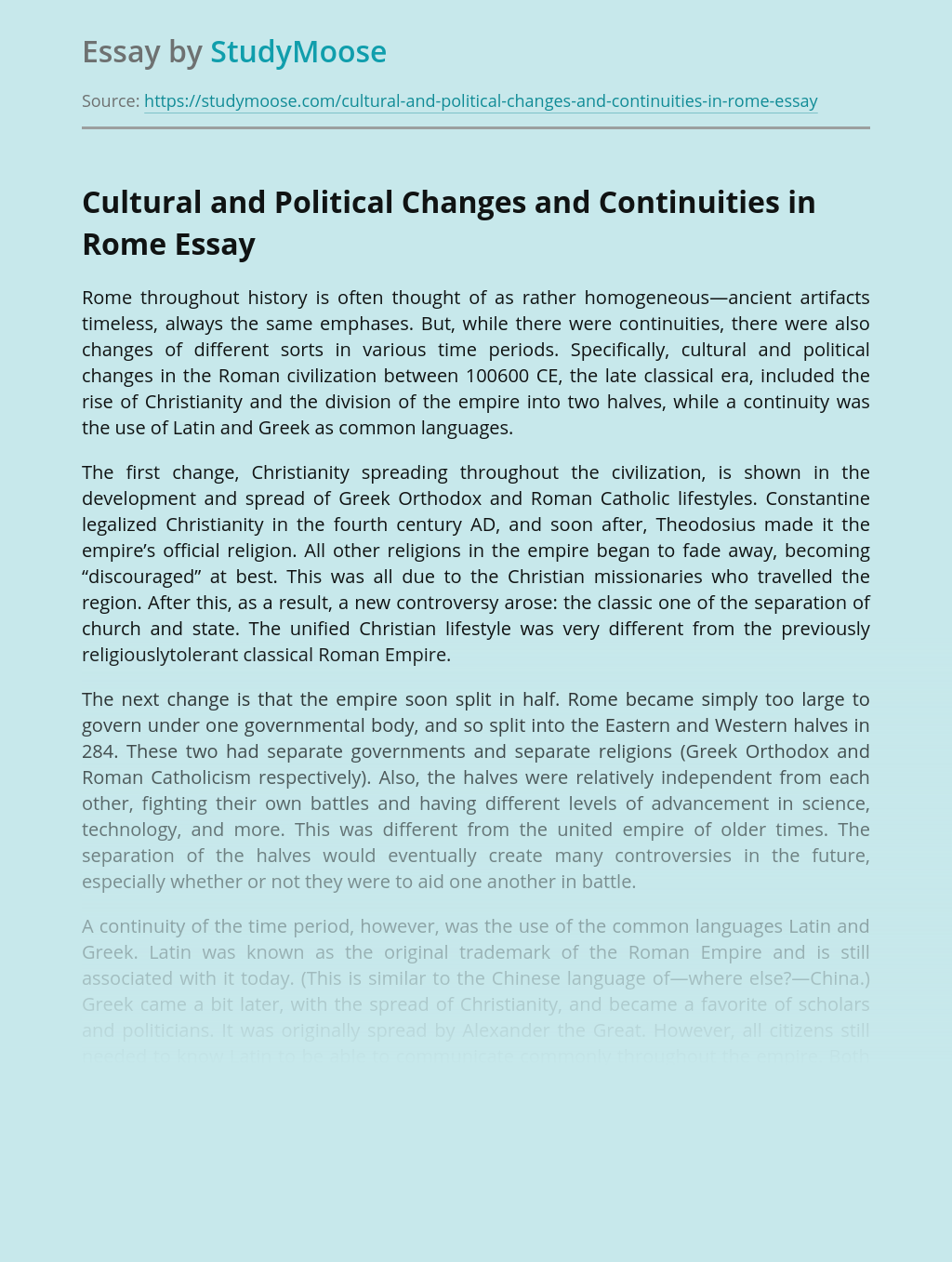 Turn in your highest-quality paper
Get a qualified writer to help you with
“ Cultural and Political Changes and Continuities in Rome ”
Get high-quality paper
Helping students since 2015
Stay Safe, Stay Original