In this essay, Shooting an Elephant, George Orwell, comes face to face with the effects of peer pressure and imperialism. While under constant scrutiny by the people who did not want to be ruled, he felt “stuck between the hatred of the empire I serve and my rage against the evil-spirited little beasts who tried to make my job impossible” (Orwell). George finds himself in an impossible situation of what he feels is right and what the people expect from him.

Don't use plagiarized sources. Get your custom essay on
“ Shooting an Elephant ”
Get custom paper
NEW! smart matching with writer

How far would you go to avoid looking like a fool? Many of us would do a whole lot of things but I don’t think we would go as far as shooting an elephant. George Orwell wrote in this essay an incident with an elephant that happened while on the job, he tries to convey to his readers that “imperialism was an evil thing and the sooner I chucked up my job and got out of it the better ” (Orwell).

Proficient in: Shooting An Elephant

This essay started out in Moulmein, in lower Burma where Orwell was a sub-divisional police officer of the town. Orwell uses the irony of the situation to compare the elephant to the downfall of imperialism.

He is very successful in convincing his audience through his own personal accomplishments, imagery, and symbolic irony that not only is imperialism hurtful and wrong towards the Burmese, it also demeans the ones having to implement imperialism. Orwell establishes personal creditability by his other accomplishments. He was a well renounced English author and journalist; two of his top accomplishments are the novels “1984” and “Animal Farm”.

Animal Farm is a book most all of us have read by high school. However, Orwell refers to himself as being “young and ill-educated and I had had to think out my problems in the utter silence that is imposed on every Englishman in the East,” (Allen). Readers sympathize with Orwell because they can relate to his emotions in the moments before the shooting. Being the leader he should have been able to make an independent decision, but was influenced by the natives.

Orwell describes his feelings about being pressured to shoot the elephant as being the white man with a gun, standing in front of the unarmed crowd. In reality he was only a puppet, allowing himself to be pushed around by the natives. Everyone has been in a situation in which he or she has been expected to be a leader. For different reasons people are looked to as leaders, sometimes because of their race, ethnicity, or heritage. Readers are also able to relate to the fact that he does not want to be humiliated in front of the Burmese. The people whom should be looking up to him. Orwell is quite clear about the feelings he has toward the “imperialism” and dirty work of the empire (Orwell). It seems these are typical of George Orwell’s writing and his life in general. Orwell was sent to a boarding school on the south coast whose attendees were “largely sons of the wealthy” (Allen). Yet, for various reasons, not all of the clear even to Orwell himself, he deliberately chose to live among working class people (Allen).

George came from self proclaimed “lower-upper-middle-class” and that opened him up to the “snobbery of the other boys, the headmaster and his wife” (Allen). This possibly set the stage for the pressures that lie ahead in Shooting an Elephant and his need to be accepted. The entire mood of the essay is set when Orwell illustrates the setting to be a “cloudy, stuffy morning at the beginnings of the rain” (Orwell). This in turn sets the tone of Orwell’s speech to be weak and discomforting. He already has established to the fact that his character is weak when he introduces the Burma people and how they laugh and mock him, the British officer. The build up of finding the elephant is really a metaphor in itself, showing the destructive power of imperialism: the elephant’s rampaging spree destroying homes, food shelves, and even killing a man who looked a though he had an expression of unendurable agony.

Upon finally finding the elephant, Orwell says “I knew with perfect certainty that I ought not to shoot him” (Orwell). But when he lays eyes at the huge mass of people behind him he changes his stance to “…but I did not want to shoot the elephant” (Orwell). Orwell then repeatedly states how immoral and guilty it is to shoot the elephant. Despite the many reasons to not shoot the elephant such as how it is worth more alive rather than dead, or how he is a terrible shot, he ultimately falls into the expectations of the Burma people. Against his will and moral belief he decides to kill the elephant. Orwell uses the death of the elephant as another metaphor of British imperialism in Burma. While researching I have discovered that there have been three major wars in Burma. In George Orwell’s essay, he writes “When I pulled the trigger I did not hear the bang or feel the kick…I fired again into the same spot…I fired a third time” (Orwell). The elephant is a symbol of Burma and its struggles to remain alive. Finally staying down after the third shot the elephant still lives, just as the Burmese people are still there but with less strength and hope after the wars.

They are now controlled by the British. It can also be looked upon that the elephant’s death was a metaphor for the decline of British rule in Burma too and how they slowly went away or died off. There is a sense of guilt Orwell gives when he mentions seeing the elephant laying there “powerless to move and yet powerless to die” (Orwell). As some Britain’s became doubtful of their right to rule others, both sides began to feel hatred, and resentment toward the British Empire. Orwell made himself believe that he was right and it was legal to kill the elephant, by making ideas to justify what he had done. But still he knows the truth to be false. The elephant could have been saved without unnecessary harm. Orwell chose to give into the pressures and ultimate end the life of what he describes as a “cow grazing in a field” (Orwell).

George Orwell’s Shooting An Elephant is a wonderful essay combining personal experience with political opinion. The transitions he makes between narration and the actual story is so subtle the flow of the essay is easy to read. More than just falling into peer-pressure, Orwell proclaims what a dilemma it is when people expect groups of people to do certain things and do certain actions. Humans can be influenced so easily, and he shows how the influences of imperialism can cause harm to both sides. Orwell demonstrates this perfectly by turning himself, who is supposed to be the higher power, into the victim! Honestly it’s a tragedy, Orwell implies, how human beings will do certain things just to “avoid looking a fool” (Orwell). 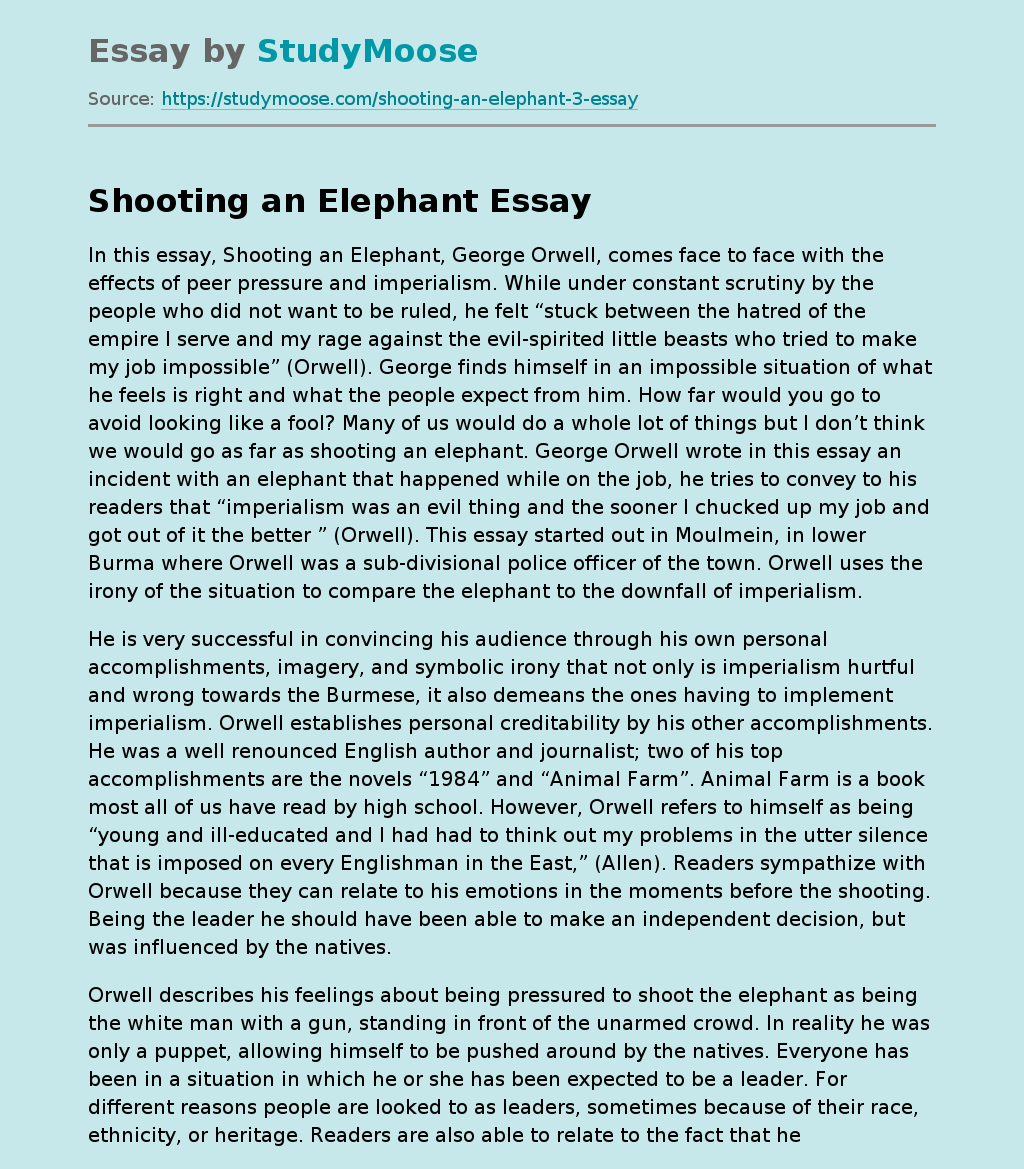