The poem “Barbie Doll” is a powerful poem written by Marge Piercy. The title carries a lot of meaning because a Barbie Doll has been an icon in society. Society has a hold on individual’s lives, especially on women. Since 1960, it started to be an issue on women to fit in and become what others want them to be. Women, who adapt to society’s dictate, have to stop being themselves and become somebody else in order to please everyone else.

Society tells us how to dress and acting order to be acceptable. By using television, the internet, magazines, billboards and even toys we see a mold of what women are supposed to look like. The world in our eyes make us women think we should look like a Barbie Doll. It is sad to see that this poem was written in 1969 and forty three years later, we realize that nothing has changed and the same barriers still exist.

Marge Piercy, a feminist activist as well as a poet, novelist, essayist, and playwright melds the personal and the political in her writing.

She writes frequently about women’s issues, particularly the ways in which women have been made to feel inferior, both about their minds and their bodies. Piercy began writing both poetry and fiction when she was fifteen. Marge wrote Barbie Doll in 1969. She was aware of the need to reform on what females shouldn’t feel about themselves and go through. In Marge Piercy’s “Barbie Doll”, we find a young girl growing up through the adolescence stage and look through only her appearance.

The girl struggles a lot during her teenage years and she shows us the effects that can happen when the world only looks on the outside of a human being. (Sigit) The girl in this poem is presented with lifelike dolls, toy household appliances, and makeup.

The girl in Barbie Doll is similar to most other girls who are presented with toys to prepare her for the roles of mother, housewife, and feminine beauty. To make clear that obviously not all girls fit into this mold of female social roles. Piercy makes reference to puberty: a time in a girl life where hormones are out of control and peers become judgmental. If one is not skinny, beautiful hair, and smile then she will be made fun of an outcast. Although the girl was healthy, intelligent, and strong she was still insecure. Her attributes were noticed because she was not beautiful. She was unable to embrace her talents and accept herself for who she was because of her physical appearance. Piercy writes how the young girl was advised to play along with the roles of society.

The young girl should diet and try to change herself to fit social norms. She should not embrace who she is but she should conform to who society believes she should be. In the third stanza this girl had had enough. Piercy wrote, “So she cut off her nose and her legs then offered them up.” Did the girl kill herself? Did she get plastic surgery? Did she cut the Barbie dolls nose and legs off? (Piercy) As the last stanza discusses her death and the placing on of a putty nose, it is safe to say she killed herself, literally cutting off her nose and legs. She wanted to belong and be accepted and when she realized no matter what she did, it was not enough.

The fifth and final stanza is extremely ironic. She is viewed by others as pretty at last. Why is she pretty? She is pretty because she is covered in makeup with a new nose, “dressed in a pink and white nightie.” Pink symbolizing femininity and white purity she is finally accepted in death. This is ironic because in death she is made to appear like someone she was not in real life. She is made to appear like the perfect Barbie doll. (Piercy) This poem demonstrates the roles of women and how they are expected to look and act a certain way. The girl in the poem represents all girls. It represents all girls in that there is one time or another that we do not feel accepted or perfect. (M) 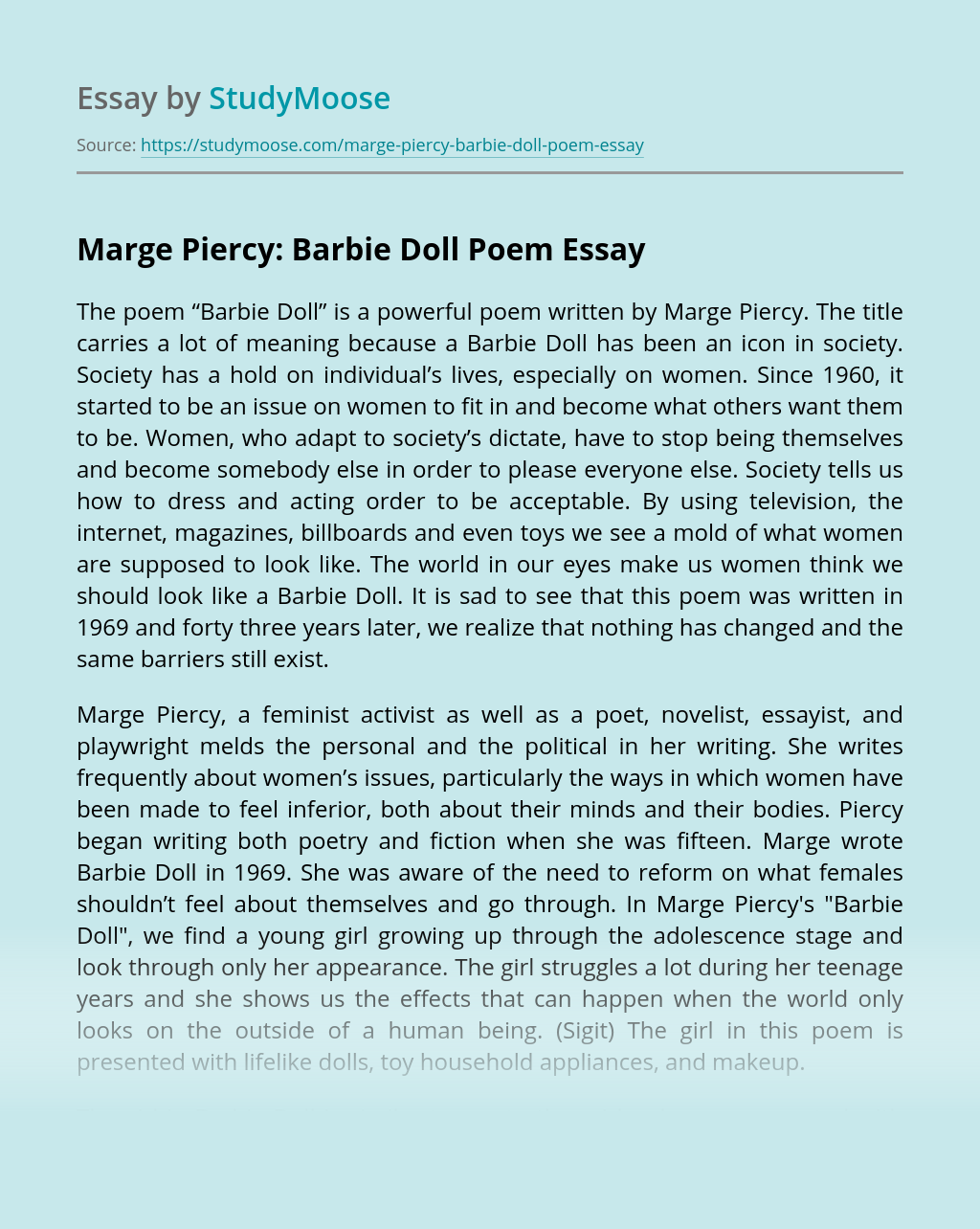