Story of an Hour- Analysis

Extract: “When the doctors came they said she died of heart disease–of joy that kills.” Write a persuasive essay of between 500 – 700 words in response to the following question: Early in the story we learn that Mrs. Mallard is “afflicted with heart trouble,” though her unexpected reaction to her husband’s death may suggest and alternative reason for her poor health. What was the cause of Mrs. Mallard’s death? Explain your point of view. “A joy that kills”, not exactly the explanation you expect to hear for the death of a woman who had died at the sight of her husband.

Turn in your highest-quality paper
Get a qualified writer to help you with
“ Story of an Hour- Analysis ”
Get high-quality paper
NEW! AI matching with writers

Then again, it may indeed depend on the cause of her joy. “The Story of an Hour” by Kate Chopin tells the story of a woman living in the 18th century and takes the reader on an emotional journey with her character over the time frame of an hour. Chopin reveals the oppressive nature of marriage in her time and puts forward her views on freedom and independence through the relationship between Mr.

Proficient in: The Story Of An Hour

and Mrs. Mallard. The death of Mr. Mallard allows Louise to feel liberated through her grief as she is now free to experience the true essence of life. Her dreams suddenly came tumbling down at the sight of her live husband walking through the door.

The sight of this led her to her untimely death. But was it the overwhelming joy of seeing her husband that killed her; were the joy of a life that had just been so cruelly? I believe that the very thought of returning to her grave reality of life with her husband was the cause of her instant death.

In an analysis of the story by Myranda Grecinger argues that the story in many ways ‘mirrors’ the life of Kate Chopin. She states that; “Kate Chopin’s father was killed in a railroad accident when she was very young, this is exactly the way that the man in the story is supposedly killed, however the man returning unharmed in the story is a fictional twist…” This can be seen as a reflection of her childhood dreams when she many times may have been waiting for her father to simply walk through the front door as if nothing had happened. She also brings light to the fact that, Chopin’s husband died while she was in her thirties like Mrs. Mallard. It was only after this point in her life that Chopin began to write and make her own money.

This reflects on the way Louise Mallard begins to transform into a strong independent woman with a new will to live after the death of her husband as portrayed when she thinks to herself “There would be no one to live for her during those coming years; she would live for herself.” (41) Louise’s initial reaction to her husband’s death is what you expect from any wife, unimaginable grief at the loss of a life long companion. It then begins to dawn on her how much better her life would be without him; which then leads the reader to question her character. She levels with herself and admits that “she had loved him–sometimes” and she would “weep again when she saw the kind, tender hands folded in death” (41), but the fact of the matter was that her love for him simply did not matter anymore. With him dead there would be no “powerful will” ruling over her with “blind persistence”(41). She would no longer be a slave to her marriage, her husband, not ever her own mind; and as she slowly abandoned she began to embrace her newly found freedom. We are left to question whether her ‘heart trouble’ was truly a physical illness with unintentional self-inflicted kind of pain. In many ways, the fact that she dies at the end of simple “heart disease” (which the doctors think came about as a result of her joy of seeing her husband) symbolizes the “disease” of marriage.

She is not able to feel free unless her husband, is no longer present. The fact that it affects her heart as opposed to any other portion of her body shows that her misery from this symbolic disease comes from something inside of her, and not, however, and external force as the doctors believed. It was the heart of a young woman whose voice had been silent for so long that suffered from such a severe mental affliction that it began to take toll on her body as well. Louise’s ‘heart condition’ is proved even more to have more to do with her mental condition than her physical state as her character develops in the story. She is quite capable of handling the overwhelming joy that should have been too much for someone with her ‘condition’. Instead we see her transformed as a person as she begins to travel on her path of self-rejuvenation. She goes from being ‘Mrs. Mallard’, described in the beginning only by a title and a heart condition. To a woman who allowed herself to fully feel the joy of freedom, whose eyes were “keen and bright”. We see her thinking about her future as Chopin uses imagery to help the reader understand the extent to which Louise Mallard wants to change her life. “She was drinking in a very elixir of life through that open window.

Her fancy was running riot along those days ahead of her. Spring days, and summer days, and all sorts of days that would be her own. She breathed …that life might be long. It was only yesterday she had thought with a shudder that life might be long (41)….There was a feverish triumph in her eyes, and she carried herself unwittingly like a goddess of Victory.” (42) It was with that triumph in her eyes that she re – defined herself as a self-asserted, powerful woman with the world of opportunity at her fingertip and she was not about to look back. By letting the reader experience Louise’s transformation, Chopin not only reveals the repressive nature of marriage in her time, but also brings the reader to truly understand how valuable freedom is. Not the freedom that is given to you; but the one that you give yourself, because all change starts within. It is for such reasons that when Louise goes down those stairs and sees her husband walking through the door she dies instantly. I don’t believe she was just a frail and fragile woman who had just been crushed by the death of her husband, and now with a weak heart realized that he was alive.

She had not been so overcome with trauma that the shock of such a sudden influx of joy had been too much for her heart. She was a woman who had been living under the oppressive state of societal marriage. She was a woman who had been given a second chance at life, and she was determined to live for herself this time around. Hence, the realization that her new reality had been nothing but a short lived fantasy; the grandeur of the life ahead of her would remain unknown. The thought of something so devastatingly tragic is what I believe killed her. The fact that she had only dipped her toes in the water, never got to swim in the big blue ocean. The thought of returning to a dark and gloomy life where all she would ever be was ‘Mrs. Mallard’. The paralyzing pain that killed her newly found joy and freedom is what I believe led to her death. And to think that “… it was only yesterday she had thought with a shudder that life might be long” (41).

Story of an Hour- Analysis. (2016, May 17). Retrieved from http://studymoose.com/story-of-an-hour-analysis-essay 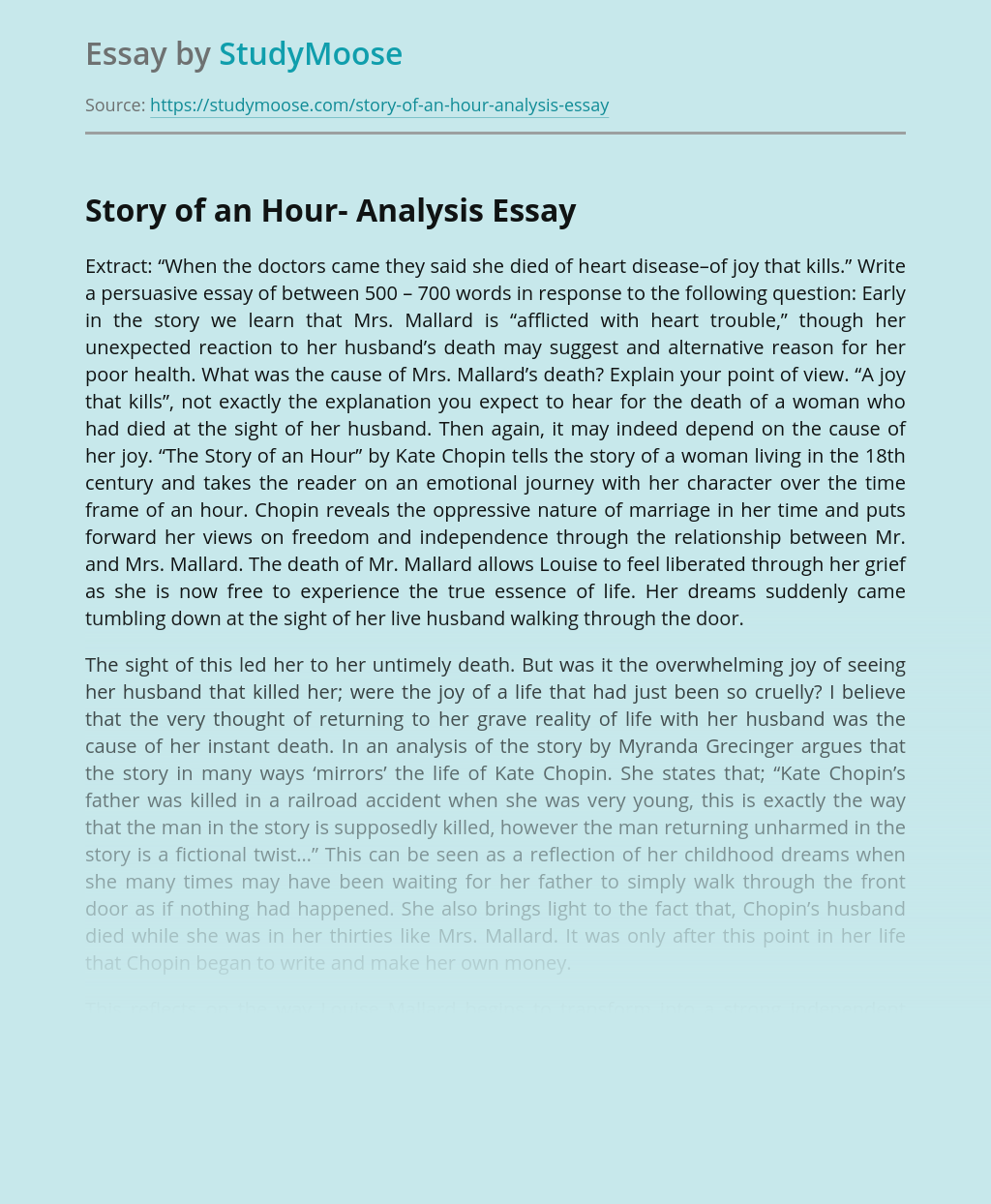 Turn in your highest-quality paper
Get a qualified writer to help you with
“ Story of an Hour- Analysis ”
Get high-quality paper
Helping students since 2015
Stay Safe, Stay Original